It is in great sadness, that we as a Brotherhood, post the 61st Line Of Duty Deaths for 2015 from the United States Fire Administration. Fellow Brother Firefighter/EMT Daniel Edward Hampton has made the ultimate sacrifice in love for their fellow man. Our sincerest condolences go out to his family, friends and our Brothers & Sisters with the Burnet Fire Department.

MFA #11: SLICE-RS and Flow Paths and Change, Oh My! - MFA principles aren't so scary or different

It's certainly an interesting time for the American fire service as we continue to learn more about our ancient enemy and adjust our tactics to best accomplish its control.  "Revolutionary" is not an inaccurate term for the degree of changes that are being proposed for the fire suppression aspect of our mission.  Depending upon which side of this revolution you currently stand, you may find yourself pushing for those innovations, or having them pushed upon you.  Some even push back.  Despite…

Many have shared their personal fitness journeys here over the past few months, so I thought it would be appropriate to share mine as well. We all have started in different places and begun for different reasons, but our end goal is all the same. To improve our functional fitness and to be become the best firefighter we can possibly be.

I have been on and off the… When it comes to extrication tools, cutter torque is one of the most “common” and avoidable causes of catastrophic tool failures. In this week’s “Quick Tip”, we are covering an option to help in recognizing/preventing cutter torque in areas that the cutter blades are hard to visualize. There are a many strong points on a vehicle…

Hump Day SOS - Search: Still the Reason We Go Inside Search & reSearch & Rescue – Still the Reason We Go Inside

I'm headed out to Wichita for Wichita HOT this weekend to help with the SEARCH class, so I've dusted off an old Hump Day on SEARCH to get the thought process…

As firefighter’s we always want to be ahead of the game,. Especially when operating with short staffed RIT’s. Do not wait until a mayday occurs to make a plan. Have a plan in place on the fireground before a mayday occurs. This does not mean adding a RIT section to pre-plans. It means the RIT members need to have a plan for the fireground they are operating on that is based on what they are presented with at the time. RIT members need to know things like how…

Hope He’s Had His Shots!

“Sid; what the hell is going on? We gotta get done so they can get water on this fire or we’re gonna lose her. Sid? Sid! Goddammit, Sid, Jake thought out loud.

As he turned the…

The Sport of Firefighting

Individual commitment to a group effort – that’s what makes a team work.

Specifically, we are tactical athletes. With that…

Retirement, it’s a word that is used to formally say you’re transitioning from the active duty as a firefighter to “civilian” life.  For some it’s a dream, for others it may be a curse.  Sadly, some will never see it.

When I started out, I know it would happen someday.  That someday was far off in my dreams.  I wanted to do this job for as long as I can and they would have to force me to go.  That was…

The Dynamics of Leadership: “Principles, Values and Skills” - Loyalty

It has been said that we influence a number of people in our lifetime. Your circle of influence depends upon you as individuals and the area you may be in. It could depend upon the organization, rank structure, personal boldness or even other peoples’ willingness to be influenced. So with so many dimensions why is this so important? Well I want you to take a short period here and think about all of the people who come to mind in the next couple of minutes and see just how many people in all… Continue

It's Really The Only Time You Have

"We know that the SCBA is our only protection against the products of combustion. It protects our respiratory system from harm. There is a big difference, however, between wearing your SCBA and using it. We would never go into a fire without wearing one on our
backs, but sometimes, perhaps for a small incipient fire or in the overhaul stages, we don’t wear it. How many times have you been at a job where once one firefighter takes his or her mask…

Firefighter Peer Support: What have we been missing?

When I attended the Illinois Fire Fighter Peer Support (ILFFPS) 3 day training in September 2015, it started as any training would. The instructor began by introducing himself but after that, it was clear that this was different from other classes. This was a training for those who wanted to learn what it meant to be a Firefighter Peer Supporter.

Many of the legal failures found in departments related to discipline, employee terminations, EMS response and documentation or other departmental events is due to the failure to document those events carefully with consideration that you may be challenged in those personnel decisions, in the provision of medical care or on a fire response.

It seems like a no brainer that on EMS or Fire events, there are templates…

Deploying with Efficiency – Basics and The Backup Firefighter

When we train for responding to structure fires, the focus is often on hose deployment and nozzle advancement. While doing this, the goal…

It is not uncommon for me to occasionally hear firefighters say “we don’t need to ventilate, its already venting”. In some cases, yes, this remains true. Maybe there is no more property to save and we can get away with saying that. One thing that I hope doesn’t get missed is that we ventilate the buildings to control the way that fire behaves inside that structure. We want to make that fire do what we tell it to do; especially given certain types of building construction. Yes we also…

When it comes to extrication, there are as many techniques as you can possibly think of, each with a fancier name than the next. This week’s quick tip is covering tunneling vs. cracking the egg. In both situations, the vehicle is roof resting and you will have extremely limited access to the vehicle sides. The better technique is all in personal opinion. Through extensive training on both I have chosen what works best for me and here is why.…

What's your standard? The firehouse just got a new puppy...

In my Department's "Rookie Book" process, probationary firefighters have a 6-month series of monthly tests.  These tests consist of written questions & knowledge and skill-based material.  The goal of course is to insure and guide their growth after the fire academy, so that when they come off probation they are well versed in "fire department life" and well capable on the fireground.

The 1st month evaluation is conducted by the rookie's battalion chief. There are 18 questions and…

Listen in Wedenday evening 9/16/15 at 7:30pm for the latest edition of Fire and Training . 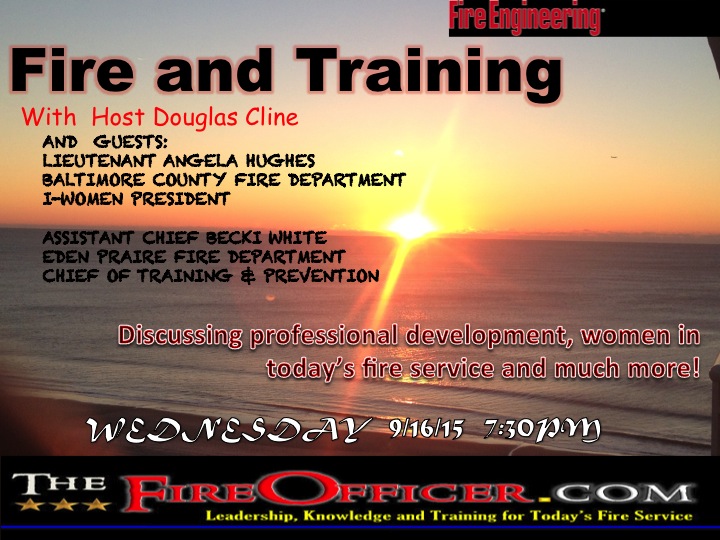 Stubborn to a Fault

Leaders need to stand their ground when…