If you were to walk into any firehouse on any given Sunday, most dayroom TV's will probably have the big game on.  Firefighters have their share of die hard football fans who rep the team hats, sweatshirts and jackets of their favorite team.  It seems the recent turmoil over NFL officiating has soiled the game most of us love. Sports networks and talk radio shows are a buzz over the number of just plain incorrect calls.  So much so that I feel the game has now been affected.  Games have a new pace..... SLOW. There is a record number of "group huddle" decision making, inconsistent or contradicting calls from two different officials and/or the number of video replays.  This has all affected the tempo of the game. These constant start and stops have some teams scrambling to get into a rhythm or flow. 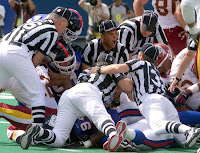 In the end, whether it is positive or negative outcome, the players and coaches have been told by big brother they are not allowed to speak about the officials.  The challenge we as die hard fans have, is we have expectations on how the game is going to be run... being fair.  The fire service is no different, Fire Chief's have an expectation on how the day-to-day and emergency operations are going to be run.  If your department has a strong officer development program then the transition of a firefighter to a newly promoted officer goes without notice. But without officer development or mentor program, the transition can be brutal.  This is exactly why many are upset at the NFL.  They have adjusted the rules and modified the game to make it "viewer friendly" (greater scoring) and ultimately made it safer for the players.  What we are seeing now is frustrated players adjusting their mindsets to see what they can and can't get away with.  It is no different in the fire service. When we appoint a firefighter to acting Lieutenant or Captain, being passed the badge without proper human behavior and physical preparation will lead to a loss of integrity.  Just imagine if tomorrow your entire officer staff was told they are no longer supervising and the firefighters who have never taken an officer development class are instantly field promoted... 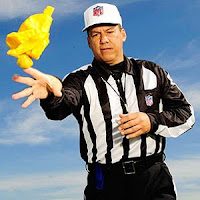 Would the department have turmoil? Would the integrity of the mission, like enforcement of policies, procedures and fire ground operations be effected? Absolutely YES, would you see good intentioned people just winging it? I think so.... the difference in what is going on in the NFL and the fire service is far more similar than one would think.  Turnover in the Fire Service and the NFL has promoted new people with the lack of real world experience.  Here are just a few examples in the past few weeks of watching the NFL: The refs missed a false start that would have negated the Jaguars final play in a 22-20 last second win over the Ravens;  The Seahawks illegally batted ball out of the end zone that denied the Lions a shot at the one yard line;  The inadvertent whistle in the Patriots / Bills game negating most likely a touchdown;  Same game, Same officials ran the clock out on the Bills last play due to the use of a college rule with a runner falling out of bounds;  (18) seconds were allowed to run off the clock in the final minute of the Steelers / Chargers game; The Ravens were denied an eligible receiver on a big call when he clearly checked in with the official.
The NFL has seen a large turnover in the last (2) years with their referees. (23) new officials to be exact and they have swapped out (20) other officials over the past two seasons. There is NO Substitution for Experience!   The NFL's use of the instant replay is also killing the sport.  Referees are questioning their own personal calls. You can see it on the field. They huddle to inquire what did you see, and then big brother is always watching now back at NFL headquarters. He has the ultimate say on the instant replay calls and that in turn is causing the "on field" officials to second guess their ability to make the call with confidence and without hesitation.  How can any of these new hire officials gain any sort of self esteem, if he or she is constantly being micromanaged by big brother?
If a non-prepared fire officer leads his or her brothers into an ill fated battle (what I like to call a born loser) the outcome will surely be bleak.  When a middle linebacker see's the wide receiver coming across the middle for that pass, two trains are going to collide, if the delivery of that hit has a lack of concern over policies, procedures or enforcement one will likely come up injured or possibly worse.  There was a reason that over the past decade the NFL has been protecting quarterbacks, the defense-less receiver and now the kick off return receiver.  Because "the integrity of the game" requires the safety of these massive players. The business model of the NFL needs these players, coaches, and fans onboard with their mission. Fire Chief's take note, do not fall into the trap of false expectations on the floor. You must send your soon-to-be fire officers to a fire officer school, seek out fire officer professional development and / or hire instructors to come in.  Better yet design an in-house fire officer development program so your industrial athletes (our firefighters and future leaders) are prepared for the expectations of their mission.  It can be as simple as allowing the current line officer's to mentor future fire officer's while on duty.

There is absolutely nothing wrong with letting promotional candidates ride in the front right seat on the next automatic fire alarm. Getting a feel for the hot seat under the mentorship of the Lieutenant or Captain. Reading the (MDT) mobile data terminal, assisting with clearing the intersections for the chauffeur's blind spot, signing on scene with a nice windshield report and/or establishment of command.  I personally think the preparation of the next line officer is not only the responsibility of the head of the department and the training officer, but the promotional candidate's current line officer as well.
In my absence, the firefighter on the current promotional list is most likely stepping up to informally lead the troops. It is our responsibility to make sure we don't let the acting officer end up looking like the debacle we currently are seeing on any given Sunday. Because the guys in pin stripes are truly struggling...

Just a quick reminder to check out my other articles on Fire Engineering's Training Blog Network.  You can also listen to us on "Tap the Box" with FETC Services.
FETC Services hosts a talk radio show on Fire Engineering Talk Radio discussing the latest fire training and leadership topics once a month.  We would love to hear from you, connect with us on Facebook, search FETC Services.
We are also looking forward to once again presenting at FDIC-International 2016.  Take Care and Stay Safe Brothers.... Train On!