We all know that in competitive sports, second place is the first loser.  Athletes (amateur or professional) all seek to win the big game. They put in the time, effort and training. The greater the commitment before the game, the better chance you have to be on top of your game!  Many great athletes spend countless hours in the playbook or reviewing film of their next opponent.  So why should the fire service be any different?

Our playing field is competitive and on game day it takes a proficient and effective team to mitigate an emergency. Which leads to the point of this article.  With the fire ground constantly changing, (lightweight building construction, plastic and synthetic based fuel loads, and the ever so popular limited manpower)  have you remained fire ground aggressive?

Billy Greenwood; owner of FETC Services and multi year presenter at FDIC International conducted an NFPA 1403 live fire training exercise in an acquired structure.  Throughout the day we were able to conduct (10) interior firefighter evolutions.  On the final evolution we completed a real-world fire behavior, flow path and flame spread evolution. No better place to learn about the enemy than on the battlefield. The battlefield dwelling (training structure) was a 3 bedroom;  2 bath open concept contemporary style, single family residence built in the 80's with an attached garage. The weather was perfect for a training burn; sunny and 54 degrees F with no significant wind.  For many of the participants, this training provided valuable insight on how FETC Services feels about why so many firefighters are getting burned during rapid fire increase incidents. 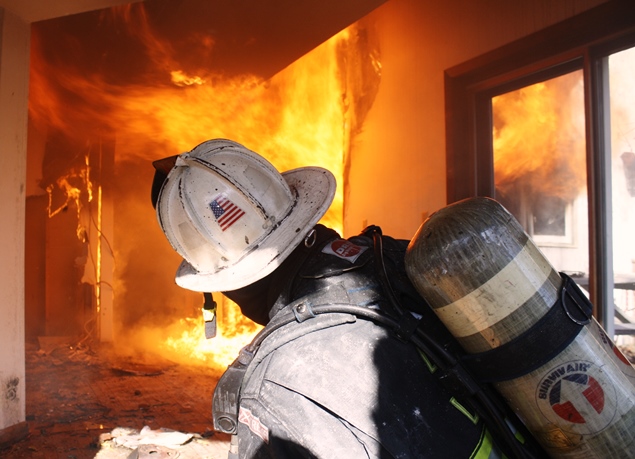 Photo 1. (above) Deputy Chief Sangermano is taking up an interior position in the living room as the kitchen in our test dwelling flashes over.  Take note at the time of the kitchen flashover, the side C kitchen window auto-ventilated due to the high heat conditions as seen through the walk-out sliding door. Photo 2. (above)  The interior crews located in the living room (behind the closed front door) were evacuated approximately 90 seconds after the kitchen flashover occurred. Through the use of FETC (TIR) Thermal Insult Recognition class, members identified that their PPE had reached maximum heat saturation.  Special Note: the crews closed the front door post evacuation and the fire becomes ventilation controlled. 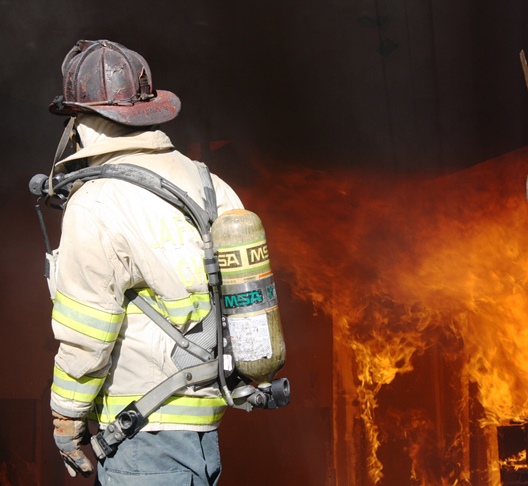 Photo 3. (above)  FETC Services Instructor Billy Greenwood is seen confirming accountability (PAR) of all interior crews and was the last firefighter out of the dwelling as the fire rapidly expands into the living room. The LR quickly became untenable for all participants and took the interior stairwell to the second floor. 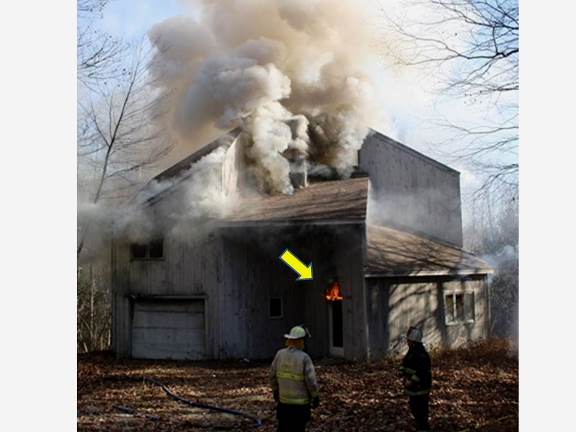 n Photo 4. (left) The front door remains closed and intact. "The Box" has become oxygen deficient and ventilation limited.  Note the smoke profile from the roof ventilation holes producing VOLUME and VELOCITY. The third factor in the smoke profile would be COLOR. During this NFPA 1403 training evolution the smoke color will not depict real world smoke profiling due to the NFPA Class A fuel source.

FETC NUGGET: Gaining the Readership Edge - By reading the building. In this photo, the box has become clearly oxygen deficient. We know that we have a kitchen fire depicted in (pic 1) At this point, the fire begins to reduce in size and speed of spread decreases due to the box becoming rich from the ventilation limited environment. (door control)   As seen in the above picture, the front door remains intact but the small amount of fire above the entry door should be alarming to the "educated" firefighter. This is a red flag warning that the box is waiting for a well intentioned firefighter to enter and create the flow path needed for rapid fire increase. Unlike classic textbook signs of oxygen deficient environments; AKA backdraft conditions (like puffing smoke; or dark stained windows) today's firefighter who makes an aggressive interior attack in these conditions to search for the seat of the fire or potential victims, has a very small window to operate within tenable conditions. Our PPE will provide minimal exposure time protection in these super heated environments.  Without a change in fire dynamics (one example being the transitional attack) but if you were to enter; stay low and NOT open the nozzle until you locate the seat of the fire you might create your own untenable conditions..... any delay in getting water on the fire; be it a poor stretch; lack of manpower to move that line efficiently in and through; up or down stairs; or any delay in suppression as the crew is searching from the attack line while advancing (multi-tasking) then firefighters will certainly sustain a rapid fire increase situation as witnessed lately in the news. Don't fall victim the OUR working environment, learn it, understand it, and adjust your tactics so you can ultimately get the job done safely!

Photo 5. (below) The front door's full length glass pane window fails due to the heat, smoke and fire gases auto-ventilating the primary door.  The box immediately leans out and the rapid inrush of air flow from the new ventilation opening (front door) rapidly increases the fire conditions and flame spread.  Note the roof ventilation opening has become lean and touches off the by-product (soot particles, and gases of incomplete combustion).  Conditions on Floors 1 and 2 get better for a few short seconds but they flashover as well.  Hence the uneducated firefighter operating in today's fire dynamic world can quickly become a victim of his or her fire environment. Once again, once you open that door... any delay in locating the seat of the fire by the nozzle team and the interior fire conditions will rapidly change for the worse! In Photo 6. (below) Just three minutes (or 180 seconds) after the front door failed; the fire dynamics have changed throughout the dwelling and now "the box" is within its flammable range and we now have FIRE on Floors 1, 2 and throughout the attic area. 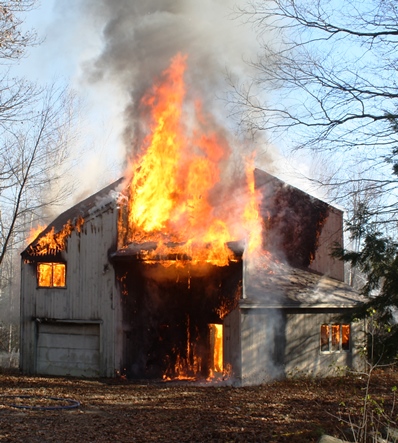 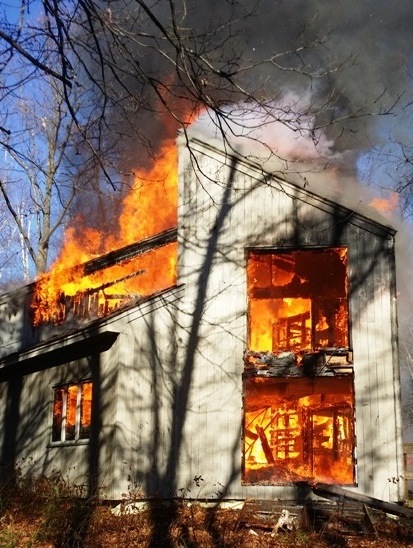 Photo 7. (right)  This picture of Side Delta (the gable end) post flashover on all levels of the dwelling. The plate glass windows on floors 1 and 2 have failed.

Firefighters today must become "Educated-Aggressive" and learn as much as they can about ventilation limited and flow paths.  Without knowledge about the newest indicators of predictable rapid fire increases, "Bad things will continue to happen to good firefighters" - FETC.   We are not advocating the operational tactic of exterior attack on smoke, but we wanted to show that if you decide to make an interior attack, the timing of ventilation in concert with suppression has never been more critical, without delay so we can continue to operate from the inside...

We would like to thank Chief Tom Vanderbilt and all of the members of the Dublin Fire Department for allowing FETC to provide real-world training in conditions firefighters are expected to work in. 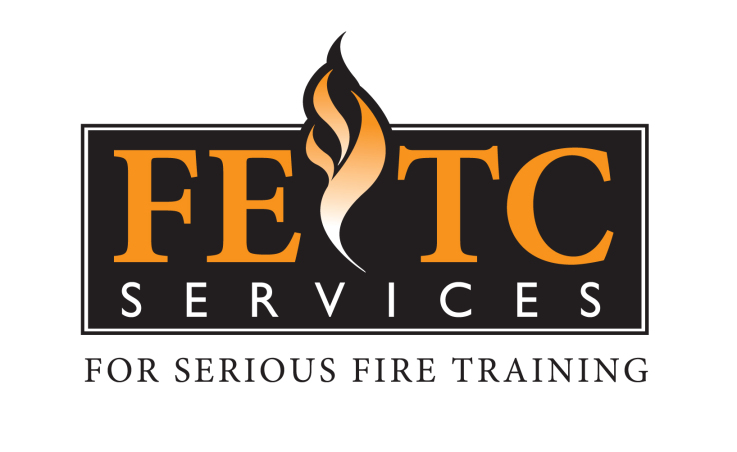