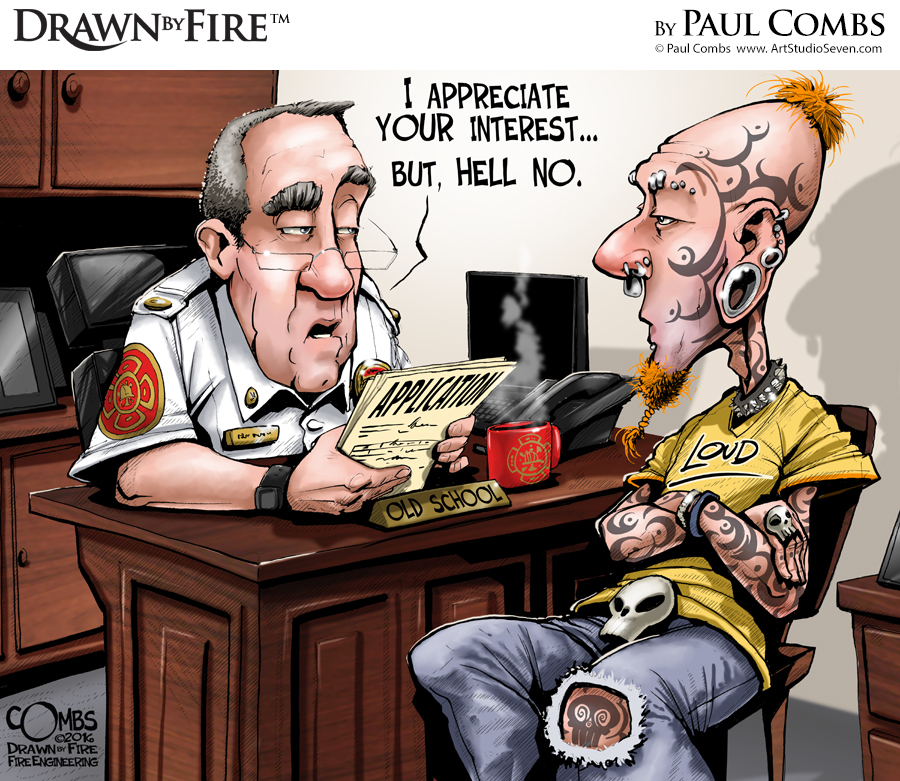 To say we live in a society of bold and colorful individuals is an understatement. One only needs to stroll down any city street to see people who would have once been characterized as “outsiders” or “one of them” pleasantly blending into modern society. It’s acceptable to be personality-loud! We “old-schoolers” may shake our heads in disbelief, but truth be told, today’s unabashed youth are intelligent creative thinkers who only lack the hands-on skills that most of us grew up taking for granted. Why? Because they didn’t have to cut firewood to heat their homes, fix their own high-tech cars in a garage, or roof a house in summer heat – it simply isn’t a necessity these days.

However, what’s a tradition-heavy and stoic fire service legacy to do when well meaning, but socially flamboyant people, want to serve? Admittedly, my illustration is over the top, but there’s a discussion to be had about the future image of the fire service and what “image” really means. As exuberant tattoos, piercings, and creative hair color (and shapes) become more socially accepted, how and when does the fire service include these individuals who have the intelligence, dedication and skills, but are outwardly brazen?

This is NOT an anti-youth or millennial illustration, so please don’t read it that way. It is, at its heart, an attempt to get a conversation started about the future of our calling and the people who will be running this show long after the current caretakers have retired. Do you have policies in place for tattoos and piercings? Do you not? I would love to read the rationale for both.

Click here to see more of my work or order prints, go to:
http://artstudioseven.com/page-fire-ems-prints2.htm
____

My department has a policy concerning both piercings and tattoos. Facial, neck and hand tattoos are not allowed as well as no piercings with exception of earrings. I would say that gauges would count as a piercing but we have not had anyone to challenge that yet. Tattoos on the arm that show more than 50% are to be covered at all times. I personally have no problem with tattoos but I feel that some patients might feel different if they see a firefighter with facial tattoos. It might make them feel uncomfortable. Piercings would probably have the same effect. Tattoos on the arm should be allowed in my personal opinion. But I try to see both sides.

I am involved in forging this path within my department. I sent a friend request about a week ago for another reason, but would be glad to discuss this as well. Please hit me up.