Perception has a few different meanings.  For the basis of this blog, I am referring to it as “a way of regarding, understanding, or interpreting something; a mental impression.”

Reality on the other hand is something very different.  It is defined as “The world or the state of things as they actually exist, as opposed to an…

Question. I am a firefighter with a ponytail. Can my employer make me trim it or cut it off?

Answer. The short answer is the employer can create a grooming standard and create an exception based on gender. There has been a lot of controversy related to the “right” to display tattoos, piercings, beards, hair length, coloring your hair a bizarre color and other personal displays of…

“STOP THE MADNESS, What we are and are not listening to”

So once again a short video clip of a fire has created a great stir in the world of the Internet. The latest video came from California and shows crews operating on a working fire in what appears to be an auto repair shop. Immediately the Internet safety zealots started posting “They should NEVER be on that roof” or “We would NEVER do that at a fire, it’s dangerous!” Many of… 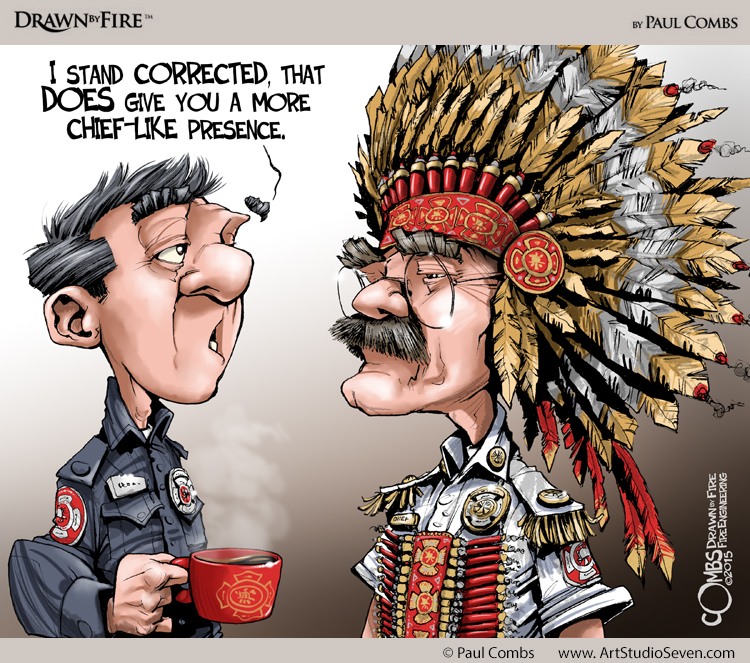 Do you have command presence? Do your people know you are the person in charge, the person who they can turn to in a crisis and know will do everything in your power to produce a successful outcome for them? Do you lead by example and “walk the walk”, or rely on bombastic talk, domineering bully tactics, and a big voice/big stick mentality to prove that you are in…

It is in great sadness, that we as a Brotherhood, post the 65th Line Of Duty Deaths for 2015 from the United States Fire Administration. Fellow Brother Firefighter & Ex-Fire Chief Sean M. Benson Sr. has made the ultimate sacrifice in love for their fellow man. Our sincerest condolences go out to his family, friends and our Brothers & Sisters with the Paramus Fire Department.

It is in great sadness, that we as a Brotherhood, post the 64th Line Of Duty Deaths for 2015 from the United States Fire Administration. Fellow Brother Firefighter Richard Leo Crosby, Sr. has made the ultimate sacrifice in love for their fellow man. Our sincerest condolences go out to his family, friends and our Brothers & Sisters with the Casnovia Township Fire Department.

Just because you are on an engine company, does not excuse you from bringing hand tools in to do work other that hose line stuff.  A good engine crew will be ready to overhaul the fire area once the fire in knocked. Sometimes the truck crews are doing other stuff like search, laddering or venting. The truck crew might not be there to pull ceilings so it is up to you as the engine crew. Same holds true for forcing doors. You carry those tools on the engine for a reason.

MFA #12: Research vs. Real World - How do laboratory results translate to the fireground?

The principles of modern fire attack (MFA) arose from the findings of the equally modern fire dynamics research.  Many have rightly asked why we should abandon tactics developed over many decades, built upon the experiences of thousands of firefighters at hundreds of thousands of structure fires, practiced by many to perfection, and embedded in fire service training, literature, and even culture, just because of contrary information gathered from maybe a hundred fires set in laboratories? … It's All About Service

It’s All About Service

The life of a firefighter/paramedic can certainly be challenging. Long hours, difficult calls, working nights, weekends, and holidays can take a toll. For company officers, managing day to day operations and…

"ONE MISSION AND ONE MISSION ONLY" "A key foundation to doing our job since the inception of the fire service is the establishment and delivery of water." (Chapter 16 'Where is My Water' - pg. 167)

Water on Fire = No more Fire

...and this my friends, is good for everyone

So, while Engine may have over the generations changed color, shape and size and have more bells and whistles…

Your Uniform as a Symbol of Leadership

I used to be the guy, like a lot of guys I think, who quietly resisted wearing button up shirts on the job - ever. They were hot, stuffy, and not “cool” like the navy blue t-shirts with the big white letters on the back. When it came to my Class-A uniform, I would avoid almost any situation that would require me wearing it. I didn’t do it in a subversive sense, but I did harbor a little bit of fear of dress uniforms in general. I didn’t really feel like I fit-in when wearing the uniform, and…

Start your Next Firefighter Workout with This...

Are you still warming up for your workout by jogging or biking or maybe not at all?  Each one of your workouts should start with specific active stretching movements.  In the past you may have skipped this part, but I assure you these exercises will help strengthen and even tone your body.  In fact, if you had just 15 minutes to workout I would want you do an active warm-up routine (or one like it). …
Continue

It is in great sadness, that we as a Brotherhood, post the 63rd Line Of Duty Deaths for 2015 from the United States Fire Administration. Fellow Brother Firefighter/EMT Stuart Hardy has made the ultimate sacrifice in love for their fellow man. Our sincerest condolences go out to his family, friends and our Brothers & Sisters with the Burton Fire District.