Frustration and desperation are two of the best motivators for change.

One of the questions that I am often asked is, “I’m am a newly promoted officer and I want to make some changes but I am encountering a lot of resistance, what should I do?”

Resistance can come in many forms – a micromanaging boss, a lazy or complacent culture, a core group of over inflated egos with “inner circle” mentality, and the all too common “because that’s the way we have always done it” mentality. Each…

Addiction and Helping A Struggling Firefighter

Addiction is a mental disorder which affects millions of Americans across the nation. Addiction is characterized by a chronic inability to refrain from behavior which is harmful to the addict. The user feels a compulsion to continue engaging in this behavior, despite repeated bad experiences. Often, the addiction, in fact, continues to grow out of control, with the addict taking increasingly greater measures to ensure access to their preferred method of stimulation, and willing to…

Bring your Best in 2017 by Building the Mind

"The mind is the battleground. It is here that the future is told."

Goals are destined to be lost if the mindset to reach them is not built first. Our lives are a reflection of our mindset and have been built through our beliefs and perspectives of the world, to include ourselves in it. We have complete control over the mindset we choose to have on any given day—it’s up to us to create the…

Product development and performance improvement are two processes that are alive and well in the fire service, resulting in a continuous stream of proposed “advancements” for our consideration.  Stronger, lighter, smaller, safer, and faster are typical descriptors of “upgrades”.  Most of these "new" items or methods are actually just modifications of equipment or procedures we already have on hand, with only a few being novel, such as the Personal Alert Safety System (PASS) or Rapid… What is passion? What does it look like, sound like, feel like? Is it something we instinctively know when we are around its presence, or can it be palpated like a strong radial pulse? Every so often a person comes into our lives whose passionate light shines so bright that comets pale in comparison, and much like a blazing comet or shooting star, their…

Question: Is your department performing inspections in your respective jurisdiction and under what law, ordinance, policy or assumed responsibly provides the reason and authority to conduct these inspections?

Advice to the new officer

Being a leader is a full time job and we can't afford to be complacent in this job. Every day you have to prove that you are worthy to be a leader in this organization. Respect and loyalty is something that is earned every day. Putting on the gold collar brass and a badge does not come with a can of respect spray. Your actions in the station and on the incident will define what type of leader you are. There are times you have to hold the reins tights and other time you can ease off. Being a…

Turning Your Down Time - Positive

Today during some down time between runs I took my company out on a building familiarization tour. The tour included looking at a really large, 4 story lightweight residential dormitory being built in our first due. The tour affords firefighters with the opportunity to get out and mingle with contractors, see new…

Don't skimp on checking for extension

When checking for extension once a fire is knocked, you have to pull ceilings walls door and window moldings’. Most know this, but as officers you have to approach each room with a 6 sided approach. This means not only all 4 walls but the ceiling and floor. It is not uncommon for fire to burn down through a floor and ignite the floor space. The same holds true for ceilings as well as the attack. Knowing basic building construction will saving you from a rekindle. How will fire spread in…

Over the last few months, I…

Today, January 16, 2017, is the day set aside to remember Dr. Martin Luther King Jr. and the powerful change that he helped bring about in this country. We often think of leaders as those in a position of authority, or holding a title or rank and possessing official power to enact their wishes or create change by issuing orders or writing policy. Dr. King had none of this. He had no official authority or power. Leadership has nothing to do with title, position…

MFA Tools and Rules - Having vs. Using

Continuing with our examination of MFA tactics as additional “tools in the toolbox” for the control of structure fires, today’s post will consider the issue of ignoring viable options.  This topic is pertinent to every fire department because, thanks to the hard work of the ISFSI, UL, and many others in developing and distributing information about improvements to firefighting inspired by fire dynamics research, and the fact that these changes are merely modifications of traditional tactics…

Going 0-100 Daily Will Take its Toll On Any Firefighter.

It’s 0400, and the alarm goes off. The synapses crackle to life. Adrenaline, rushing through your brain. The amygdala fires off and muscle memory takes over. It’s a blur as you rise to wakefulness and body your way through the hall to the ready room and from there, the crew carrier, the engine, or the ambulance. This is the life of the first responder. One moment, dead asleep, exhausted. The next, firing on all cylinders, your mind racing, reviewing your SOP’s internally. The teeth clench,… 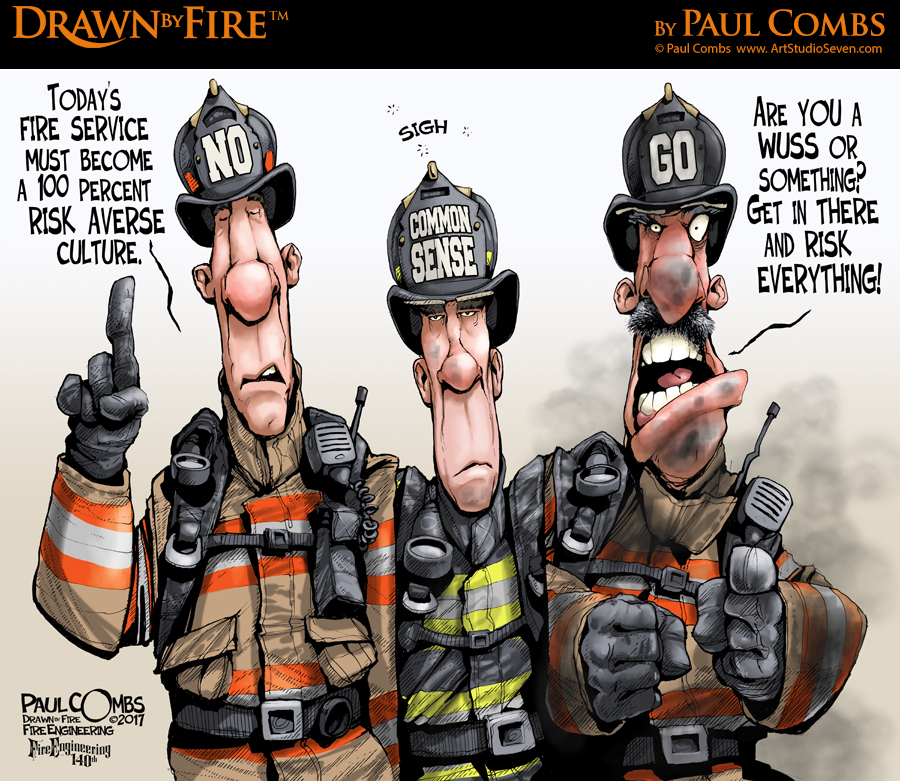 Note: This is the second in a planned series of blogs using the "tools in the toolbox” model to explore the many facets of the profound changes inspired by ongoing fire dynamics research.  As discussed in my first post in this format, I am a big fan of viewing MFA tactics as additional “options” to use for controlling fires in structures.  Besides being non-threatening and accurate, it allows me to break down the various components into more manageable, blog-sized,…

While participating in a leadership open forum recently, a fellow panel member told the story of a seminar speaker who engaged him about the responsibilities of his job. After rejecting everything that my friend described as his job as being secondary, the speaker told him that his one job, his sole purpose, was to make the Fire Chief of his department look…

Note: With the dawn of a new year, I'm determined to become a better blogger.  The Modern Fire Attack series has been running as a self-posted blog for about a year and a half now, and I have simultaneously, though less often, been submitting more general fire service articles under the title of my old column "From the Jumpseat".  Other than the topics, the size of the two (and the effort I put in to them) are roughly the same.  Having long ago begun writing for emergency…

When conducting a primary search, the Officer must take several things into consideration very quickly:

While en-route to the call you need to monitor the radio. Listen to where the fire is located.  Know the type of structure and occupancy you are responding too. As you arrive on the scene, look at as many sides of the building…

Over $2,500 in cash and prizes will be given away to Firefighters, EMTs and Medics!

YOU can Win and more importantly Motivate Others!

Don't wait, get your program and get started today!

The purpose of the contest is to motivate Firefighters, EMTs and Medics to change the…