Journal Entry 34 - After the Fire

Most of you who know me know that I write about either a training concept or things that inspire me. This month I’m inspired. It comes right in time for Fire Prevention month. Sorry to scare off some of you with the FP words but keep reading anyway.

On January 19, 2000, an arson fire took the lives of three college freshman and injured 58 others at Seton Hall University in South Orange, N.J. I was a Chief in New Jersey at the time and colleagues of mine had been to the fire. It was…

If you notice, the title is not "The Training Officer" and your first thought is, what is the difference? Much. Your thinking of the old myth that an Instructor has to be certified from an accredited group such as IFSAC or ProBoard. But that myth is wrong and here is why. I myself, your blogger for the time being, is a Certified Fire Instructor from both Massachusetts and New Hampshire and I have the "Certs" to prove it but, does any of this make me a good or a better Instructor than anyone…

We as Firefighters are trained to handle most anything that comes our way , and with that comes the added stress of handling our own family's needs , esp when your spouse becomes ill . The journey I have been on since last October of 2013 has been a whirlwind experience , going from having my spouse being they had Stage 4 Brain Cancer to the Operation to recovery  to treatments and the ups and downs of dealing and becoming the go to guy.

We really have no idea what are spouse's do… 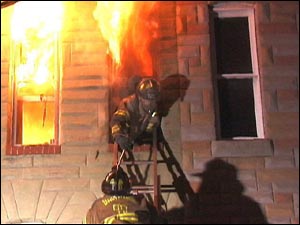 As we start the week off, lets take today to review your departments MAYDAY policies. These tasks, procedures and policies need to be practiced and reinforced through training constantly. We sometimes put this off to one time a year or when the next…

~A few quotes from pg. 248 of the book "25 to Survive:  Reducing Residential Injury and LODD" tells a story of reflection, introspection, humility and refinement for personal and professional progress...

"We know that few firefighters or company officers have experienced the 'perfect fire'. In that scenario, every fireground task said and done is accomplished right on…

Mental therapy for me is sitting around with the men and women discussing the "job" and how we can effectively learn from each run and training scenario.  As with any incident, the most rewarding time for the Incident Commander, Company Officer, and Chief is when the "team" executes every play from the play caller.

Training programs are essentially one of the most critical programs in any fire department.  Having a pro-active training plan can and will eliminate chaos on the fire…

The recent defense verdict in Connecticut (Ultegra LLC v. Mystic Fire District No. 3:09-cv-01284 (MPS)) brings to light the need to evaluate your fire departments hiring process used in bringing a new candidate into your organization. There are numerous ways to recruit and hire a qualified volunteer or career firefighter ranging from legacy hiring (a family member nominates the candidate and they are voted in) to a comprehensive hiring process…

One very common problem with Standard Operating Procedures (SOPs) is their propensity to be way too long.  Therefore the only people that read them are those who absolutely have to.  Administrative SOPs (policies) sometimes have to be long due to the fact that there is often legally required information included.

Operational SOPs, on the other hand, are SOPs that address incident scene response or on-scene procedures.  When these become lengthy the objective can get lost in the text,…

It is in great sadness, that we as a Brotherhood, post the 64th Line Of Duty Death for 2014 from the United States Fire Administration. Fellow Brother Firefighter Allen Westby has made the ultimate sacrifice in love for their fellow man. Our sincerest condolences go out to his family, friends and our Brothers & Sisters with the East Islip Fire Department. …

The television programming in my house is changing. Our children are getting older and the programming is moving to a more diverse genre. The other night my oldest was watching the show Jersey Shore on MTV;  so I sat down and decided to see what he was taking in.  It didn't take long to figure out the cast had a mantra for "summer life" on the shore.  Mike "The Situation" and another, Pauly D. often stated their day was going to consist of "G-T-L"; and it took me some time to figure out what…

Is It Time To Change Your Obsolete Leadership Style?

If there’s one frustration I experience more often than others, it’s when someone says, “My leadership style is ….” Why do so many leaders believe they must follow a particular leadership style or model, when most issues can be addressed by a variety of approaches, or even a combination of them? Maybe it’s time to ask ourselves: “Is my leadership style obsolete?”

Today’s fire service leaders are facing more danger, complexity, and uncertainty. And it’s not slowing down. Whether it’s…

It is in great sadness, that we as a Brotherhood, post the 63rd Line Of Duty Death for 2014 from the United States Fire Administration. Fellow Brother Firefighter & Captain Anthony “Tony” Lynn Grider has made the ultimate sacrifice in love for their fellow man. Our sincerest condolences go out to his family, friends and our Brothers & Sisters with the Campbellsville Fire-Rescue Department.

I am a firm believer in earning your place - starting from the bottom of the ladder, doing the less desirable jobs, while climbing to the roof. New firefighters must prove themselves in what seemingly matters little, and more experienced firefighters will notice - and in turn trust them with more important jobs. The old adage “shut up and listen” still holds true today… We’ve all been there at one point or another.  We’ve had our idea shot down, we’ve been moved to a station or a shift we didn’t like, or we’ve been labeled as something we aren’t.  If you haven’t been there yet…just wait you will. This is a quick tip showing an alternative push base for a Hydraulic Ram. Spreaders pinched on the rocker panel may or may not be recommended depending on your individual hydraulic manufactures recommendations. This is just a quick option to keep the ram base from "running" down the rocker panel. Drive the halligan spike into the rocker with a axe,…

Are You a Hoarder?

Have you seen the recent articles, classes and information on hoarding? It is a real problem for us as a society and for us as firefighters.

The dangers are obvious based on the conditions of the homes and buildings we have to enter and search. It can make our push very slow and can easily disorient us with so many obstacles.

Just like with these homes, some firefighters are hoarders. Not in the sense…

Looking out for your guys

Have you ever heard someone use the phrase, “they look out for their guys”? I have heard it on several occasions and it has often made me wonder, what the true meaning of these words is. I have had conversations with fellow firefighters and it typically is directed at the company officer. Sometimes the conversation consists of firefighters being in trouble and things being swept under the rug. Sometimes, there is talk of things that are going on around the station that are unprofessional and…

I would like to continue with the search blogs.  As a reminder, I will post a video of the fire scene and provide some basic information.  I would hope you would respond to the blog by commenting at the bottom of the page.  If you are a little timid, (you’re probably not a “B” shifter) at least think about the situation and figure out what you would do if you were assigned search at that fire.

This fire occurs in a three story garden type apartment. One level is mostly below grade…