The Brotherhood's Not Dead

The Brotherhood’s Not Dead

The Brotherhood. A fraternal order that has existed for centuries within the fire service; it’s a bond amongst firefighters unmatched to any other organization on earth. To gain admittance, one can’t simply get hired or join but must first prove ones worth. Not by talk, but by action. It’s the fellow brothers/sisters who say when and if you become a member. Once admittance is granted, you become a…

Part 1 - What are we talking about?

Courage is considered by most to be a vital firefighter trait, and its lack has been cited by some as the cause of a decline in fire service effectiveness. Whether it's a perceived pre-occupation with safety, or a choice of fire control tactics that are considered less valiant, the willingness of our members to display sufficient bravery in the pursuit of protecting life and property has been called into question. Unfortunately, an…

Odds are at One point in time you've experienced encountering a bully by now. My nephew had been dealing with a bully in school and of course he followed what he was told and went to the teacher. Surprise nothing really ever happened with it unfortunately. It got to the point where he had to get physical and stood up to his bully.

What did he learn, well going the proper route doesn't work and he had to stand up for himself. And a lot of times, as a child, unfortunately altercations…

We have spent so much time talking about mental wellness issues with First Responders. Politicians, activists, writers, therapists and anyone else with a stake in this conversation has leapt up and screamed that we need support for PTSD.

But, there is a dilemma. We are focused on the wrong area to invoke real, long lasting change. With our unfortunate, myopic viewpoint, we are tackling a problem at its most difficult state. By the time ‘PTSD’ is on the table for…

As Buffalo (NY) firefighters arrived at the scene of a reported propane leak in a four-story radiator warehouse (Type III Ordinary and Type IV Heavy Timber construction), a massive explosion occurred, killing five firefighters and injuring nine others, three of them critically. The force of the blast blew BFD Ladder 5′s tiller aerial 35 feet across the street into the…

As I sit here on Christmas Eve at the firehouse by myself, something dawned on me that has nudged me to make my first ever blog post. I come from a small seaside community in Southeastern Massachusetts and am a Shift Commander and Training Captain in a department that averages 1800 annual responses with a staff of 7 full-time sworn personnel and approximately 55 paid on call sworn personnel. Our department has done a great job of holding on to the combination model and still providing… 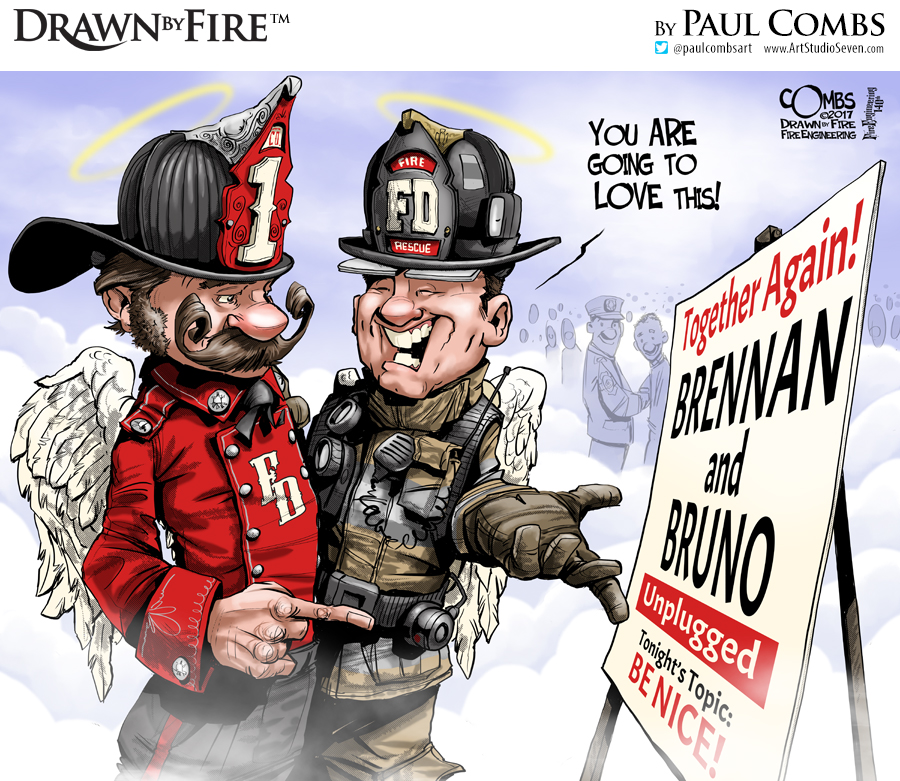 Here's a link to my previous post and memories of Chief Brunacini. Rest easy, Chief... and thank you!…

On the topic of fire ground searches, I often hear a gross amount of misinformation and fear speak. This normally perks my ears and readies my mind for a conversation of great importance to me. After the talk, which usually turns into an argument that ends with “Well you just have to do what I tell you to,” I find myself thinking. Why should I have to convince firefighters to do a search? This topic of search culture usually leaves me searching for something else. Some of my associates think…

Pass on Your Knowledge - A Method to Teaching New Skills

As the fire service has evolved, we have had to adapt from our original conception of just putting out fires. In today’s fire service, we must be jacks of all trades! We are medical professionals, hazmat guru’s, technical rescue specialists, among many other things. With all of these different disciplines there is an abundance of knowledge that we have had to acquire/learn.

How did we learn these skills? Some have gone through a basic entry level program, whether that…

A great video on the BlastMask, which is featured in the Tech Today section of FE this month. If your department hasn't taken a look at the unbelievable training aid- now is the time! www.BlastMask.com ; 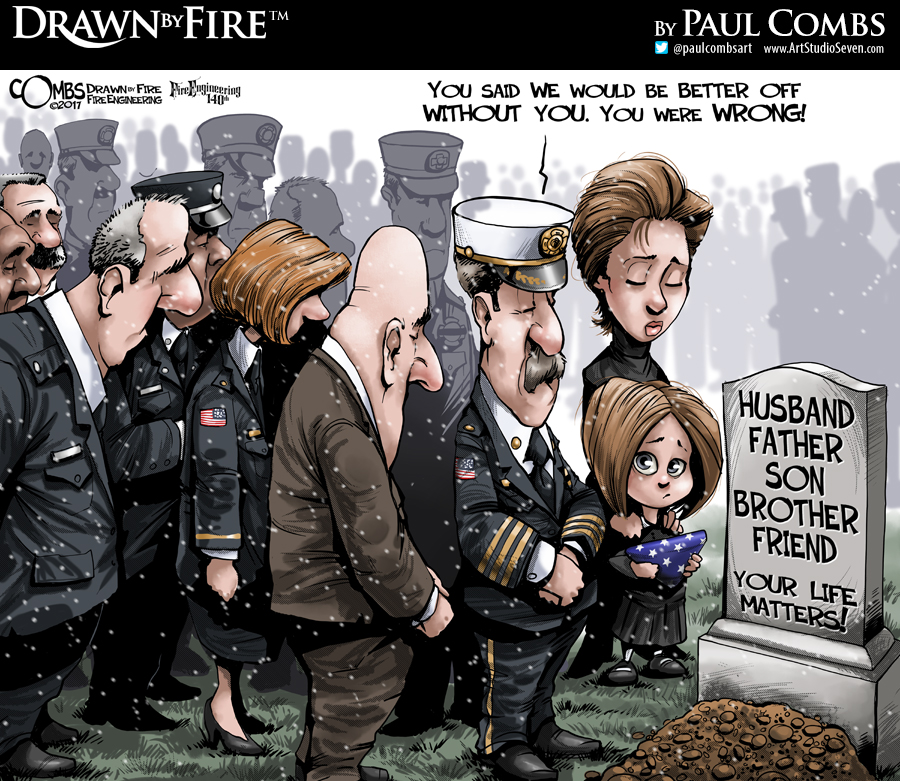 There is a common understanding among the firefighter and EMT community that there are lives that can’t be saved or rescued. It’s a fact of life, and death. Usually those lives are lost due to circumstances beyond our perceived control, and most of us have come to grips with this certainty so we can focus on the next savable life. Understanding doesn’t make it…

Let's look back to that very moment you received your gear after being voted into your local volunteer station or your first day at your career job. From those moments on there was always that person that's been on the job for quite a while, with years of experience that just took every new guy under their wing or anyone willing to listen. We can probably all look back and think about who our on the job mentors were or still are. They taught us about what it meant to be apart of this great…

DON'T FORGET ABOUT ME! 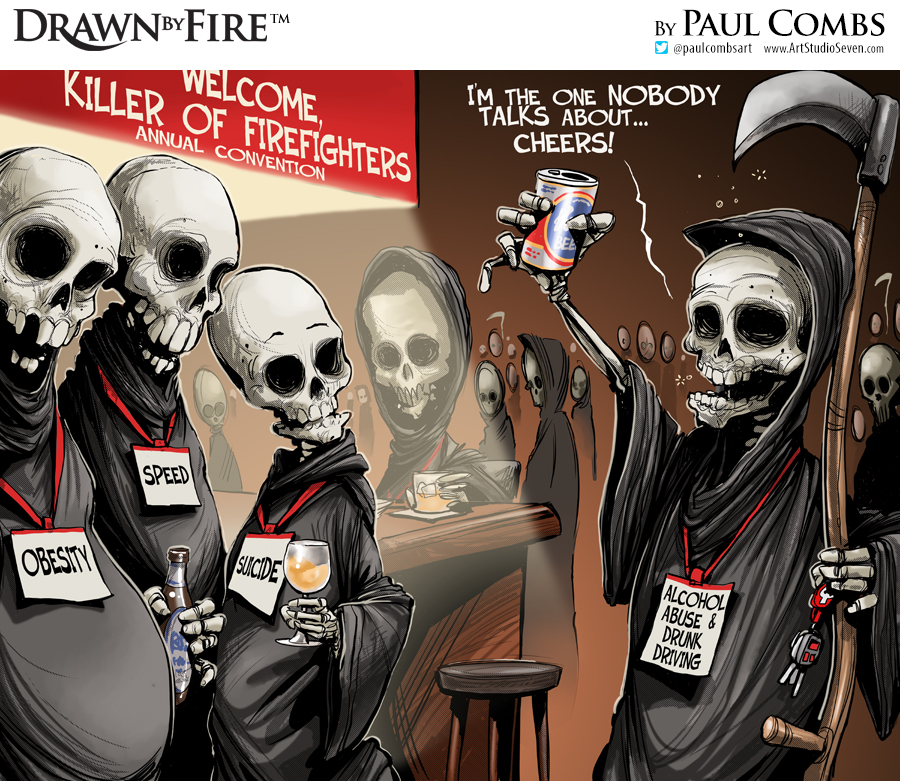 Today I publish an illustration that was harder to draw than I thought it would be - and I knew it would be hard! The subject of alcoholism, alcohol abuse, and drunk driving is at times a taboo subject in the firehouse and our national conferences. We eagerly discuss tactics, obesity, cancer, suicide, depression, seat belts, speed, health and fitness… the…

Underwriters Laboratories Firefighter Safety Research Institute (ULFSRI) last week released their three reports on the Fire Attack Study - Water Mapping, Air Entrainment, and Full Scale Experiments. They can be accessed from the Fire Engineering home page, or at www.ulfirefightersafety.org. These were the experiments that looked at the effects of interior attack, among other things, in order to provide more realistic comparisons amongst…

eLearning Design & Development Cost Analysis…How do I prepare for 2018?

As a pioneer in eLearning, I have been part of over 5000 plus projects from Project Management, Instructional Design, Instructional Development and LMS management. The biggest roadblock I experienced, in the beginning, was pricing the jobs based off of fair market value. I looked at sites such as Salaries.com, Career Builder, and Indeed and looked at the hourly cost for each of the assignments. I also pulled out past logs to see based on word count and slide count as well as level on how…

Becoming a Better Version of Yourself

Today is  going to be about becoming a better version of yourself because you have to want it. If you're going to do it and it really starts with an end goal.

Where do you want to see yourself? Then you have to create the daily disciplines or habits and keep repeating them and then you're going to get closer and closer. Just like working out, you can't go to the gym one day and be as fit as you want to be. You can't go read one book and just be done with it. You can't go to one fire…

Journal Entry 49: What a Year

What a perfect day to sit down at the keyboard and write about this year. It’s December 7, Pearl Harbor day. Thank you all veterans for what you’ve done for our country.

As most of you know, I battled prostate cancer this year (surgery in March) and am very happy to report the blood tests are coming back clean. Like the folks who lived in Pearl Harbor and persevered through the attack and never saw it coming. I was back in the O.R. three times since March…