There's an epidemic in the American fire service, and terrifyingly little is known about it. Some estimate that as many as 1% of your brothers and sisters might already be infected, while others claim that number is as high as 10%,… 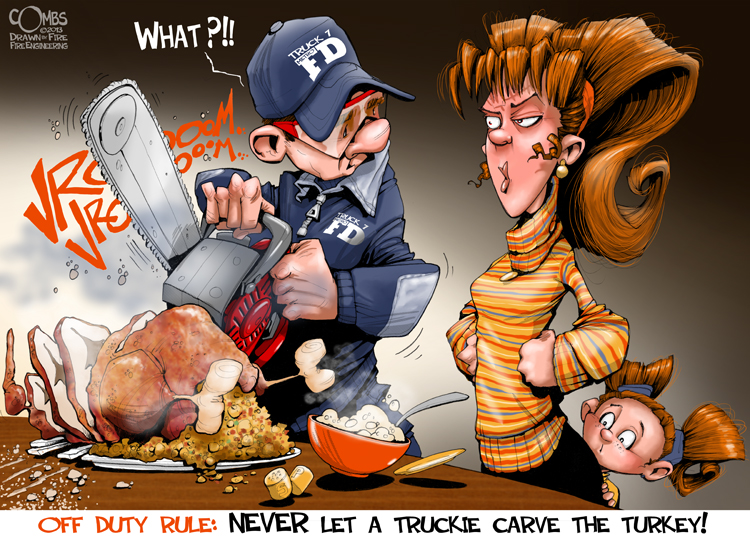 You laugh, but you know you've thought about it!!!

Have a safe and blessed Thanksgiving, everybody - and for Heaven's sake, clean your chainsaw after the carving.

Click link below to see more of Paul's work or to order prints:…

It is in great sadness, that we as a Brotherhood, post the 92nd Line Of Duty Death for 2013 from the United States Fire Administration. Fellow Brother Firefighter & First Assistant Chief Russ Gow has made the ultimate sacrifice in love for their fellow man. Our sincerest condolences go out to his family and friends and our Brothers & Sisters with the Factoryville Fire Department.

“Never Forget” is a slogan that the American fire service enjoys using. People never forget major events, brothers that have gone before us, or historical fire service moments, though it often drifts far from a firefighter’s daily thoughts over time. Sometimes a small show of brotherhood is delivered in a way that makes it difficult for one to have an important memory far from their thoughts. I have questioned over the past few years if true brotherhood is a dying breed. All too often it is…

I have spent a significant amount of time lately talking about and finding examples of utilizing speed on the fireground. It is my belief (and the belief of many others) that the surest way to increase our survival and the survival of the people we serve is to operate with a high level of tempo. I am not advocating blindly sprinting around and tripping over ourselves. I am talking about the kind of speed which is a product of high quality/fidelity training and a thorough knowledge of fire…

Are you an Instructor? Why NOT?

I completed my Instructor several years ago and at the time I was only interested in teaching short, hands-on classes if any at all.  I always liked passing on information to my members at the station.  I started teaching (assisting) some basic firefighter classes and quickly found how much I enjoyed it.  Not only was it fun and fulfilling to see a new firefighter go from learning to don gear to making actual fire attacks; but it is also a great way to stay current on basic skills and new…

Why the Quint Works for us.

Why the Quint works for us.

In many firehouses across the country you mention the word “Quint” and you might have well just insulted that firefighters favorite football team.  Even in our own department some guys still wish we would run just a Ladder Truck.  Slowly the culture is changing and the reality is setting in that running a Quint actually works in our department.…

DRAWN BY FIRE, TOO Looking for a fun Christmas gift idea? Well, pre-orders for my new book Drawn By Fire, Too are now being accepted on the PennWell bookstore. Over 150 cartoons in a beautifully bound hard-cover book. A link for personalized copies will be available on my webstore by tomorrow. Thanks,… 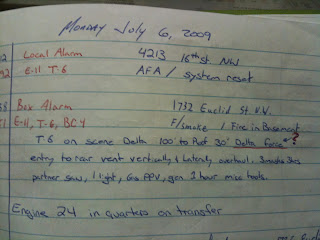 These log books vaguely capture what the company did. Who captures the how you performed at an individual level?

I have a re-visiting guest blogger this month. My good friend and associate Captain Rob Beattie of the North Plainfield (NJ) Fire Department has returned, infiltrated my Journal and penned an amusing analogy of team work and the firehouse coffee pot. Show this to your probies/rookies/new guys and where applicable, your old guys. Thanks Rob for your insight. I enjoyed this one! Ronnie K … Watch your giblets - it's budget time!

Click link below to see more of Paul's work or to order prints:…

Overcoming the Wall on Recessed Doors

Commercial outward swinging doors can be some of the most difficult forcible entry situations due to the locking systems and added fortification but what is often overlooked in training is access challenges. The outward swinging door below was on the back of a commercial building. You can see this situation has a half wall on the hinge side and the jamb side…

It is in great sadness, that we as a Brotherhood, post the 91st Line Of Duty Death for 2013 from the United States Fire Administration. Fellow Brother Firefighter & Lieutenant James Goodman Jr. has made the ultimate sacrifice in love for their fellow man. Our sincerest condolences go out to his family and friends and our Brothers & Sisters with the Nedrow Volunteer Fire Department.

We are not all "Big City Fire Departments"

We are not all “Big City Fire Departments”

We see the hats, t-shirts, posters and even TV shows that advertise the “Big City” fire departments.  The reality is, we all can’t be the big city.  Most of us work or volunteer,  in comparison, small towns, in all types of departments (Paid, Combination, Paid on Call or all Volunteer).  It’s nice to think we can operate like a big city but in…

GETTING AHEAD OF THE GAME 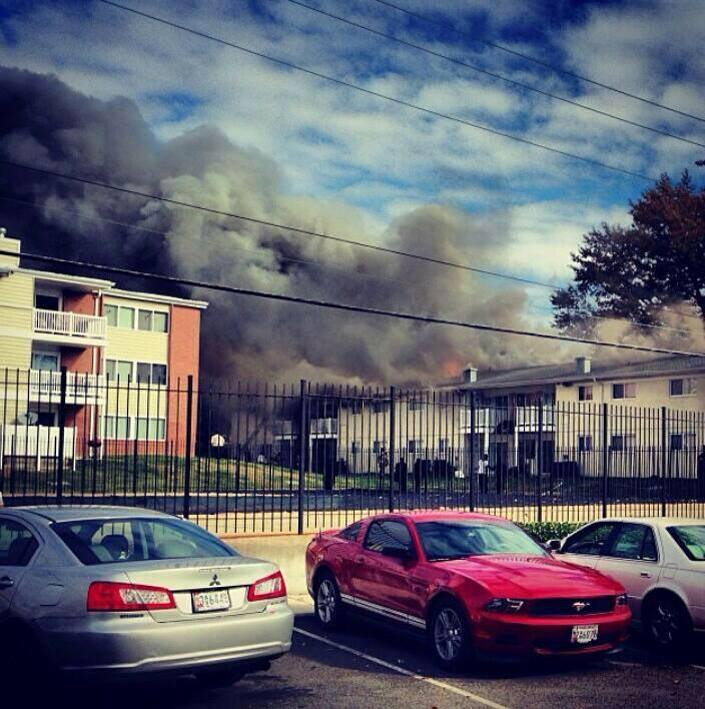 Units from my department and other companies in Prince George's County, Maryland responded to this second alarm fire last week. It involved a strip of two-story, attached, ordinary constructed, garden style apartment buildings.

Companies on the initial alarm had a well advanced fire in an entire apartment unit with substantial extension to the attic space.…

Find Those Learning and Practice Moments

Training is not just for the drill ground or the classroom. We need to look for learning moments and practice opportunities whenever we can.

We recently responded to a fast-food joint for a fire in the kitchen. I was on overtime and we were on the engine that was second in. The first in company used a Type-K extinguisher to put out the small grease fire on the grill.

It is in great sadness, that we as a Brotherhood, post the 90th Line Of Duty Death for 2013 from the United States Fire Administration. Fellow Brother Fire Police Captain David Roland Barr Jr. has made the ultimate sacrifice in love for their fellow man. Our sincerest condolences go out to his family and friends and our Brothers & Sisters with the Community Fire Company of Perryville. The term two-hatter has traditionally been used in the fire service to recognize firefighters who work for a career fire department, as well as volunteer for another. However, on this Veterans Day, I would like to recognize another two-hatter - the men and women who serve as firefighters in their communities, and serve our country as warriors here at home and abroad.…

In September I began writing a web column for fireengineering.com titled "Modular Concerns".  My goal is to generate a discussion among fire service members on the hazards inherent in certain construction techniques used by the prefabricated (modular) construction industry.  The first submission was designed to frame the discussion; modular construction is everywhere, these buildings are nearly impossible to distinguish from traditional stick built construction, they often utilize…