Author’s Note: The kid in me comes out twice a year; Christmas and Halloween. I hope that I have managed to entertain you with this tale. Please enjoy the loose ends and see how many obscure references you can find as you read on.


It’s the morning of Halloween in Mockingbird Heights.

Mockingbird Heights is a sleepy little hollow that is nestled in between Haddonfield and Savoy. It has been said often that you can… 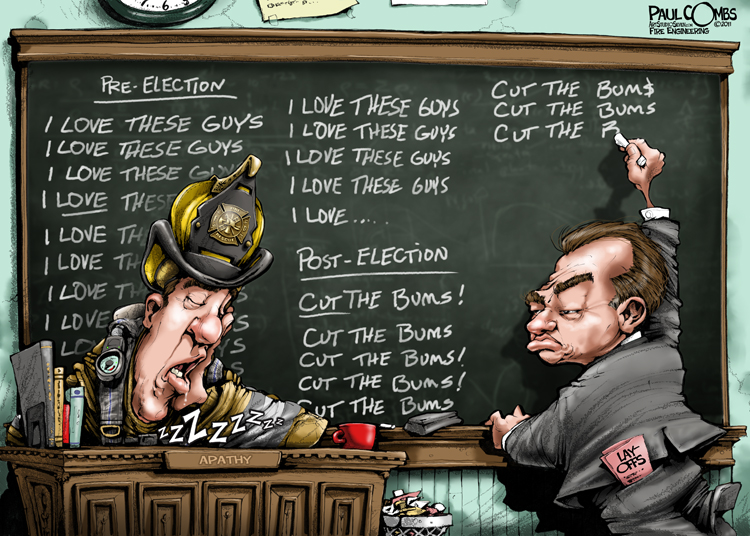 Are you feeling drowsy? Lulled to a sense of slumber by the pleasant handshaking, smiles, and promises of utopia? Have the photo-ops and media exposure left you with an exaggerated state of importance? Well here's a wake-up call: YOU'RE IN FOR A BIG SHOCK, BUDDY!!  Politicians promising everything this side of the moon is as old as... well, politicians. Yes, some are… Continue

ARE YOU WHISTLING PAST THE GRAVEYARD? 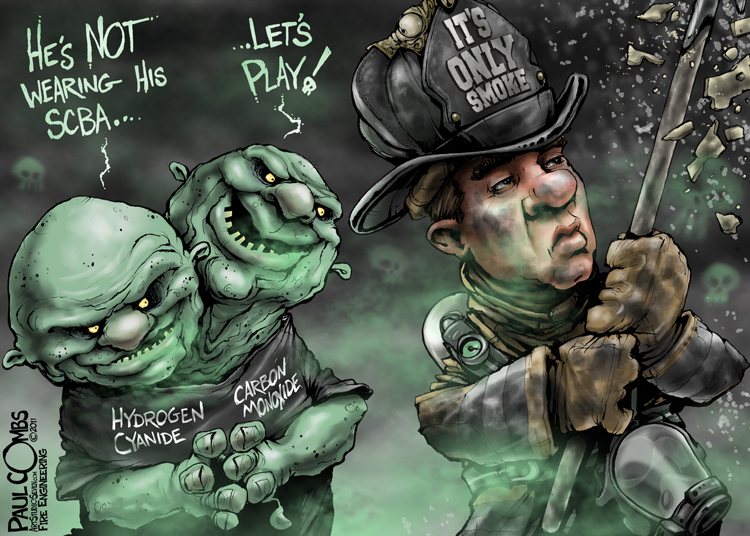 Unlike our favorite Halloween monsters and ghouls, the Toxic Twins are very real, and very deadly! Sometimes they kill quickly using heart attacks as their form of malice, other times they kill slowly in the form of cancer and respiratory illnesses. They are invisible, silent and odorless - and indiscriminate!

Are you wearing your SCBA during overhaul and…


The Moline, Illinois city council, on the advice of the city administrator, plans to cut 12 firefighter/paramedic positions and privatize EMS in the city.

Immediately after the decision was made, Chief Ron Miller announced his resignation/retirement. See associated links:…

I have stood by and watched this “Occupy Something/Anything” movement move from a crawl to almost motionless and all the while, telling myself to keep quiet.

But I cannot any longer…

Those of us who grew up in the 60s/70s have an appreciation for the protests and demonstrations that rolled through the better part of two decades. It was in those days that I spent my time as a radical. I did not consider myself a liberal, though in the strict definition,…

The social media world is providing instructors with numerous options to pass on knowledge.  As an instructor, I am often wanting more time in the classroom or on the training ground.  Here’s a way to gain valuable class or training time.

By making a video preview of an upcoming lecture or hands-on drill, instructors can increase the knowledge base of their students prior to them even stepping foot in the classroom or on the training ground.  This will allow for greater conversation…

Here’s a piece brother firefighter Charlie Hillman (Norwalk (OH) FD) wrote about a chimney fire last winter.  He brings up several fireground basics that we all should remember.  Pass it on!

On Wednesday, January 26, 2011 at 0850 hours the Willard Fire and Rescue department was dispatched to a chimney fire.  The chimney fire was reported in a 1 ½ story wood-framed, single family dwelling, ranch style home.  Upon arrival the supervisor initiated incident command and a…

I am wondering if anybody knows any good websites/articles on how to give a good size up ? I understand the basics for instance wescom 2229 is on scene we have a two story residential structure with smoke on the c/d side of building occupants evacuated, will be starting our attack going to fireground red.  Our there any good memorization aids for giving an intial size up?

I am sure many of you like me wish you could be in Emmitsburg this weekend to honor or Fallen Brothers and Sisters and share time with families and all that the Brotherhood is about.

Here are a few links you can watch the NFFF Memorial Weekend live video on http://statter911.com/ http://www.fireengineering.com/index.html or http://ironfiremen.com/…

Dual role firefighters? Still in the cards for the future of the Fire Service, or obsolete cost saving system?

1.) What are the thoughts on dual-roled firefighters? (Firefighter/ Medic)

2.) Do you see this trend continuing in the future?

3.) Does the community seem to benefit from this type of service?

4.) What draw backs to this trend have you noticed?

I am with an organization that has had FF/Medic's in our system since 1995.  I myself, am a cross trained officer and came in under this new program.  There have been several noted…

Kansas City Was a Ghost Town

I arrived in Kansas City on a late Tuesday afternoon and would not leave until Friday morning.

While in Kansas City on company business, I would rise early in the morning and would return to my hotel room in the late evening and would grab a cigar, go outside and call my wife. I would return to my room, turn on the TV for the day’s news, grab a bottled water from the fridge and I would sit down and read the Kansas City Star and the USA Today.

Then, I would check my emails, put…

A Chance to Recognize an Outstanding Firefighter and Gentlemen

Capt William Caviness From Greensboro North Carolina collapsed and passed away yesterday from an apparent heart attack while participating in the Chicago Marathon. Capt. Caviness was running to raise money for the IAFF Burncamp and the other efforts which the IAFF extends in order to provide opportunities to burn victims. The last time I checked this link below is still active where you can see a photo of Will running and make a contribution. What a fitting opportunity to be able to… 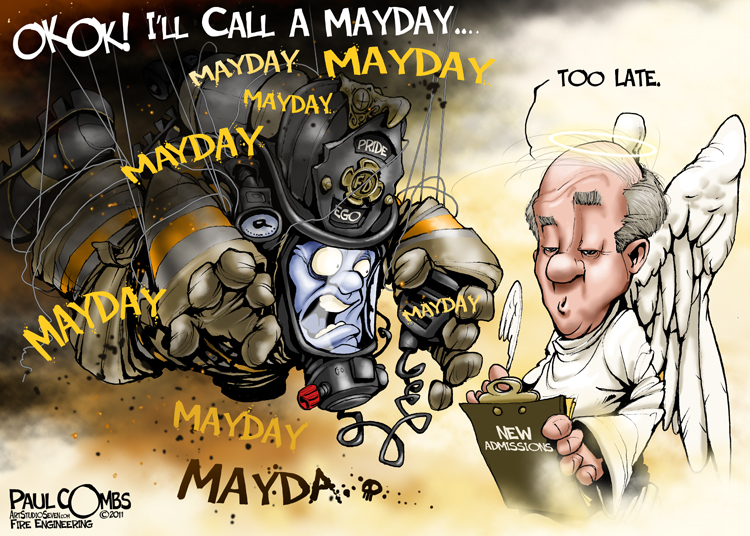 I have never been very good at math, but even a cartoonist can solve this equation: ((EGO + PRIDE) x BRAVADO) - MAYDAY TRAINING = TROUBLE!!!

Don't get me wrong, I am all for aggressive tactics and training to keep yourself out of trouble. Understanding building construction, fire behavior, the laws of gravity upon a structure being…

Whenever I take a business trip, it also gives me the opportunity to cover a wealth of issues in my mind.

As I drove to Kansas City, Missouri, I was thinking about an article that I had read in the Sunday paper.

In the article, the author attempted to identify where we lost civility and an unwillingness to compromise in our political system.

I can easily understand the…

The USFA has received notice of the following firefighter fatalities: Guam

It is in great sadness and with heavy hearts, that we as a Brotherhood post the 74th Line Of Duty Death for 2011 from the United States Fire Administration. Fellow Brother Firefighter II Vince Cruz has made the ultimate sacrifice in love for their fellow man. Our sincerest condolences go out to our brothers family and the members of the Guhan (Guam) Fire Department.

The USFA has received notice of the following firefighter fatalities: NC

It is in great sadness and with heavy hearts, that we as a Brotherhood post the 72nd Line Of Duty Death for 2011 from the United States Fire Administration. Fellow Brother Firefighter & Captain George Fisher III has made the ultimate sacrifice in love for their fellow man. Our sincerest condolences go out to our brothers family and the members of the Sandy Bottom Volunteer Fire & Rescue.

The USFA has received notice of the following firefighter fatalities: IA

It is in great sadness and with heavy hearts, that we as a Brotherhood post the 71st Line Of Duty Death for 2011 from the United States Fire Administration. Fellow Brother Firefighter Michael Collins has made the ultimate sacrifice in love for their fellow man. Our sincerest condolences go out to our brothers family and the members of the Shelby Fire & Rescue Department.