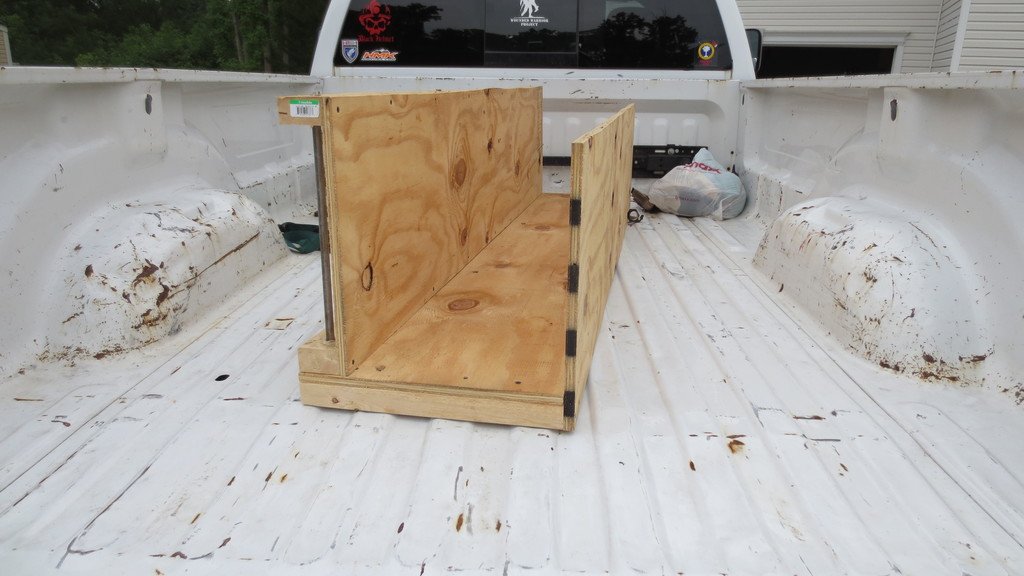 HOW EFFICIENT CAN YOU MAKE YOUR COMPANY? "GETTING OUT THE DOOR"- 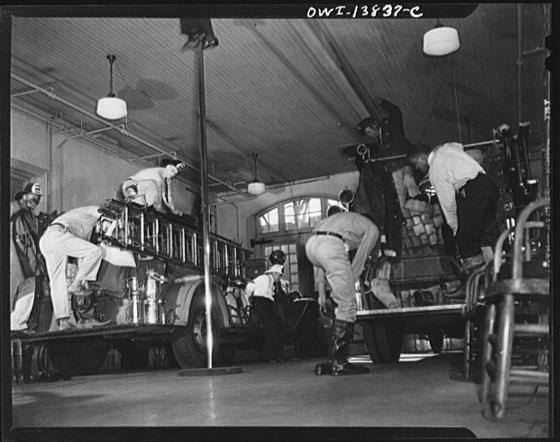 As the old saying goes, "you make up time getting out of the door (firehouse) on an emergency run, not on the street (driving fast)".

To compare todays "turnout" times to those of times past, a few different stories come to mind. The first is of Engine Company No. 4 in the (Washington, DC) District of Columbia Fire Department.… 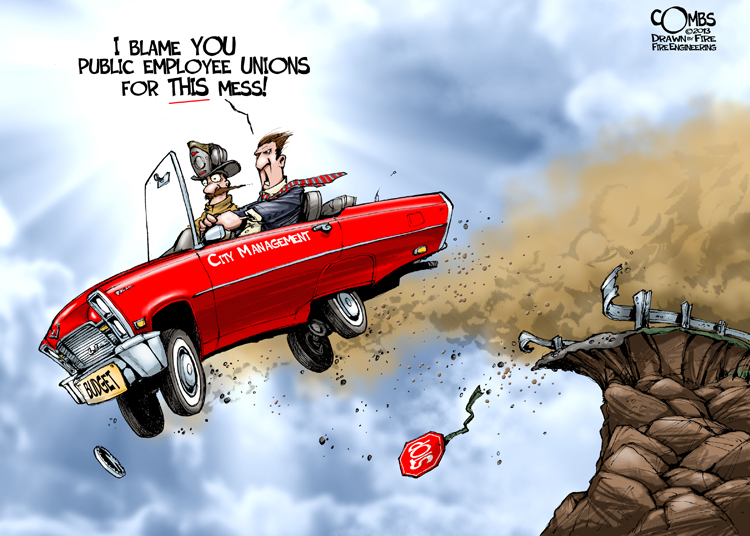 Many cities are feeling the economic pinch of poor budget management or simply bad economic luck. Whichever the case may be, some city managers are pointing fingers at everyone else, of course, for their plight. This cartoon is not stating that some public employee unions are blameless, because in part, they are (that's why they are in the car and not standing along…

The Most Important Person on the Job

This phrase has been used countless times in the fire service to describe nearly as many positions: from the chief, the company officer, the senior firefighter, to the guys riding the backstep; although in my experience the most important person on the job is the training officer.

Being a firefighter today is not an easy job; our shareholders (the citizens we serve) expect us to be experts at everything from haz-mat mitigation, to wildland firefighting, to paramedicine, to vehicle…

Drilling for the Prevention of Bad Things

Drilling for effectiveness cannot be overstated enough.  In posts and articles firefighters and officers are imploring that we, as a fire service, put a heavy emphasis on drilling and training on a regular basis.

Not just when training is scheduled, but everyday we are at the fire house, we must use the equipment and techniques to master our craft and to know the capabilities and intricacies of our equipment and that of ourselves.  What have we forgotten?…

Over my short career in the fire service, I have been asked many times: “Why do you care so much?” I often answer with: because I can.

Everyone should have that reason to get out of bed and get the day started.  Many days it…

Are You Ladder Ready?

A few months ago I posted about operating on a quint and the idea of reverse laying for first due engines that run with quints.  A great deal of us are operating on these apparatus everyday and don't have a single designation as an engine or a truck, rather we are assigned based on our order of arrival and on what tasks need to be done.  Most of the time we are not assigned by what type of apparatus we arrive in.

We are also running thin in regards to…

DO YOU REMEMBER WHY WE ARE HERE? 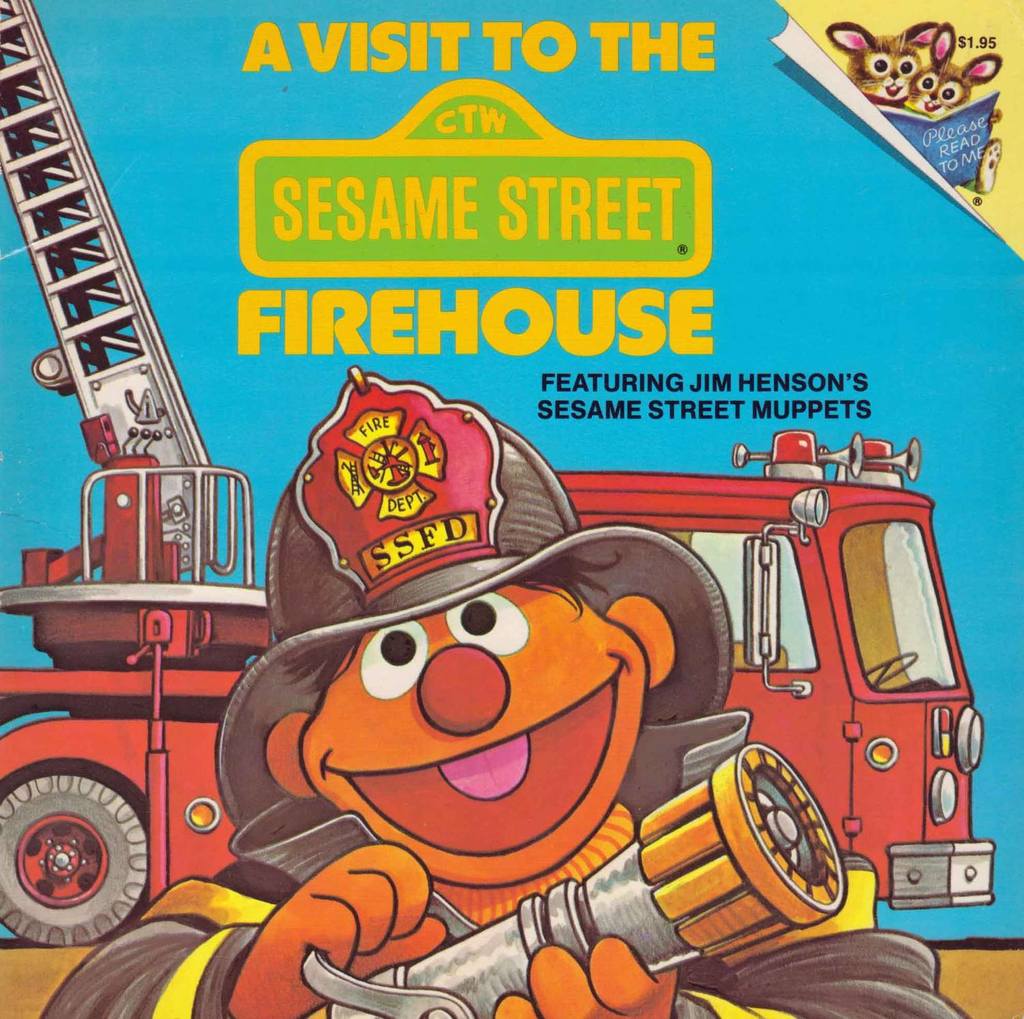 Politics, attitudes and every other negative thing you can think of is in and around our firehouses at any given time. Its an unfortunate, yet true fact of our culture/life.

But, through the thick of this negativity, do you ever take a minute to step back and remember WHY WE ARE HERE? Why do or did we have the passion that a…

It is in great sadness that we as a Brotherhood post the 68th Line Of Duty Death for 2013 from the United States Fire Administration. Fellow Brother Firefighter Bruce Sensenig has made the ultimate sacrifice in love for their fellow man. Our sincerest condolences go out to his family and friends and our Brothers & Sisters with the Quentin Volunteer Fire Company.

It is in great sadness that we as a Brotherhood post the 69th Line Of Duty Death for 2013 from the United States Fire Administration. Fellow Brother Firefighter & Assistant Chief has made the ultimate sacrifice in love for their fellow man. Our sincerest condolences go out to his family and friends and our Brothers & Sisters with the Loris Fire Department.

It is in great sadness that we as a Brotherhood post the 67th Line Of Duty Death for 2013 from the United States Fire Administration. Fellow Brother Firefighter & Lieutenant Matthew Blankenship has made the ultimate sacrifice in love for their fellow man. Our sincerest condolences go out to his family and friends and our Brothers & Sisters with the Mansfield fire Protection District.

Talk is cheap. Let's mount up and get moving...Talking in Circles-Heads Up Firefighting

Talk is cheap. Let's mount up and get moving...

Are you engaged in this job?

I was reading an article today about the single biggest problem with America's workforce. Engagement. The author of that story feels that engagement with your job is the worst problem with our workforce. I tend to agree with him.


It is the same for the fire service. The bottom line is engagement. In short, are you innovative and willing to work toward bettering the fire service? are you simply going through the motions? Or are you actively seeking ways to undermine… Continue

IT'S UNDER CONTROL, NOW! 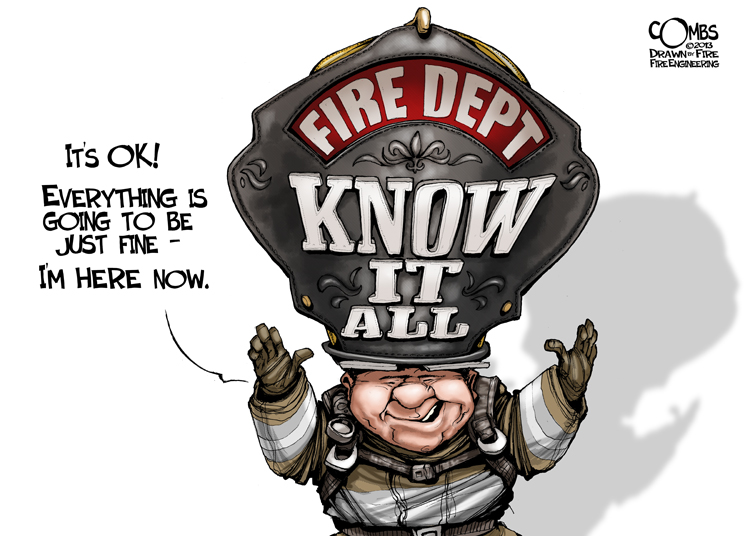 We all know this guy, right?

Click link below to see more of Paul's work or to order prints:
http://www.artstudioseven.com/page-LE_Prints.htm

Are you prepared for you enemies?

"Strategy without tactics is the slowest route to victory. Tactics without strategy is the noise before defeat.”
― Sun Tzu, The Art of War

We are engaged in a war. A war that never ends. As firefighters and even fire officers we must be able to understand our enemies or even think just like our enemies so we can be successful on the Fireground, our battle field. We must be students of fire dynamics and building construction.Then we must learn about our strategies and tactics to… Continue

When you walk out of the station for the last time, what will remain...Leaving a Legacy-Heads Up Firefighting

The Duty To Lead - Part One

THE DUTY TO LEAD - PART ONE 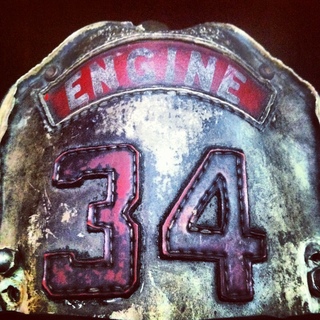 The duty of being an effective leader in today’s fire department is not an easy one. Notice that I referred to it as a duty, and not a task. When you accept your position as a company officer, you inherently assume the duty of leading the men and women under your command in a variety of environments.…

A few blogs to check out, and why we bother with this blogging nonsense...Spreading the Word

Behind Scenes Of Recent UL Test

Note: This isn’t a official video of UL. The purpose of this video is to allow you a look at testing conducted this week at UL and provide you a little preview of  more great things to come from UL and our committee research.…