How many of you have been on fires where your first lines off the rig are not working? Its like your wasting your time with these hoses because your not getting anywhere. THE FIRE IS NOT GOING OUT.

I recall one I was on. The crew I was supervising was slinging the water yet it was not working at all. I took the pipe from them and noticed that it was at like 30gpm's. Now the attic was rolling, the roof was nearly gone, the 2nd floor was free burning I mean it was going. The flows we where delivering were not enought. The streams were not doing enough.

That was with a selectable gallonage nozzle.

Now there was a training burn I was at and the lines were being placed and flows established and there was this one handline had a smoothbore tip on it and getting a good stream was impossible we were flowing water like crazy we went from full tank to 3/4 tank in no time flat. What happened was the tip on the shutoff was off a deckgun It was big.. We had the flow but we were going to be right on the fire for the stream to reach the fire. 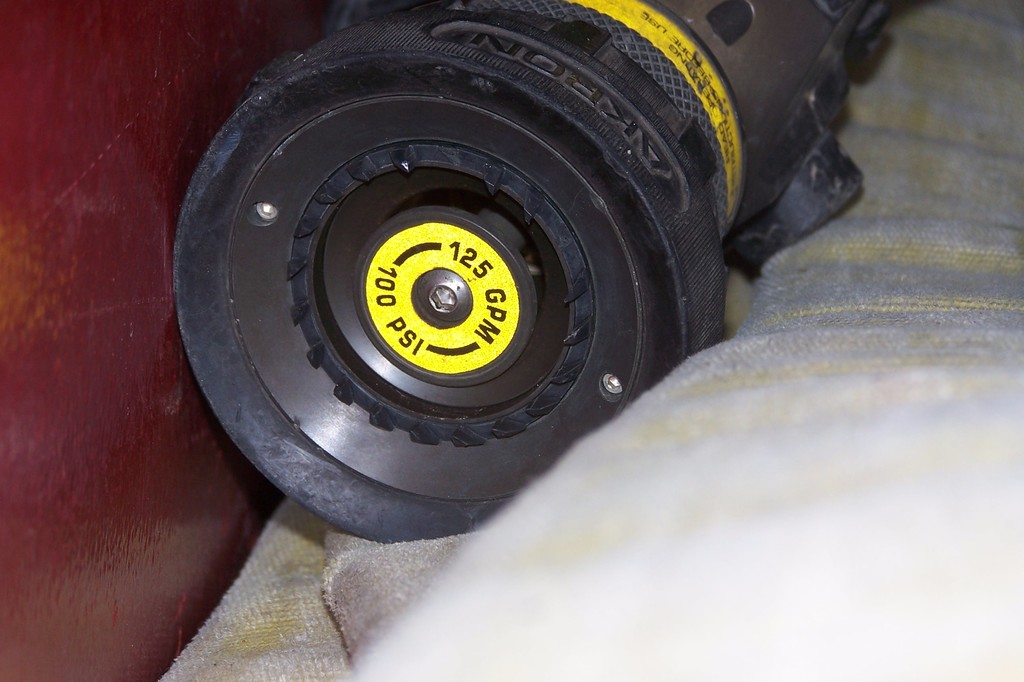 Take a look at the above picture. 125gpm's at 100psi. Seems simple right but as we all know if your flowing say 75gpm's it will look like its flowing correctly right. In short looks can be diseving. We need to check these combination nozzles out. We need to flow with them learn how they perform, what flows we can get from it, make sure your streams are good.

We got a truck once that came from Pennsylvania. There was a nozzle that stands out to me that came with the truck. It was not flowing right it sounded like it had gravel in it(which it did) and the stream was all messed up. we tore it down and sure enough packed with gravel. To some it would have been fine " it flows water, so whats wrong with it?" Thats the mindset some have. For grass fires and such, sure it would have worked. But honestly is a nozzle operating at 50% something we need, is it appropiate for this line of work........... I say no.

Another big thing is pumping the truck under pressure.

We need to make sure that we are pumping those pumps to achive the flow we need to.

One of the best ways to test your flows is to simply get out there and flow the water. Many departments budgets dont allow them to spend alot on hose and they rely on donations and making the most of what they have. That results in different age hose, different brands, and friction losses. To make sure your pressure is set right you need to flow them.

Im sure we have all seen the results of incorrect flows. And if you havent well, its not a good thing to witness.

So get out there flow them lines and know your flows.