This year at FDIC, I was a lone wolf. I guess that made me more mobile and I didn’t have to worry about the schedules of others. I only had ME to worry about and my nights there were shortened considerably.

I buy two shirts when I get to the Indiana Convention Center.

I always go to the Indianapolis FD Emerald Society booth and purchase their shirt, because the money is going to a great cause. It is an awesome group that provides a valuable, time-honored service that is such a…

So being new here and being new to the Fire Service, I have a few questions here, but first my background , I have over 30 years of public service [ retired Trooper ] , recently appointed to fill a vacant seat , Now understand I have no real background so this is a time for me to learn.  Thanks to my new son in law [ happens to be a Fire Chief and my daughters both Wildland firefighters] he convinced me that I should submit my letter to the Board to be considered. So  I have been appointted…

. As an experienced Officer and owner of my own Firefighting Training company, LEGACY Firefighter Training , we all realize the importance of training and education. These are extremely valuable tools, especially with less experienced firefighters. Train for the basic fire and educate you and your members, then they will be ready for the unusual situation. The foundations we teach in the fire service will benefit all at the fire scene, now and always. Stay Safe....… Continue

From budget cuts hurting both career and volunteer departments to the changing attitudes of the public, “doing more…

FDIC Wrap-Up - What a week! 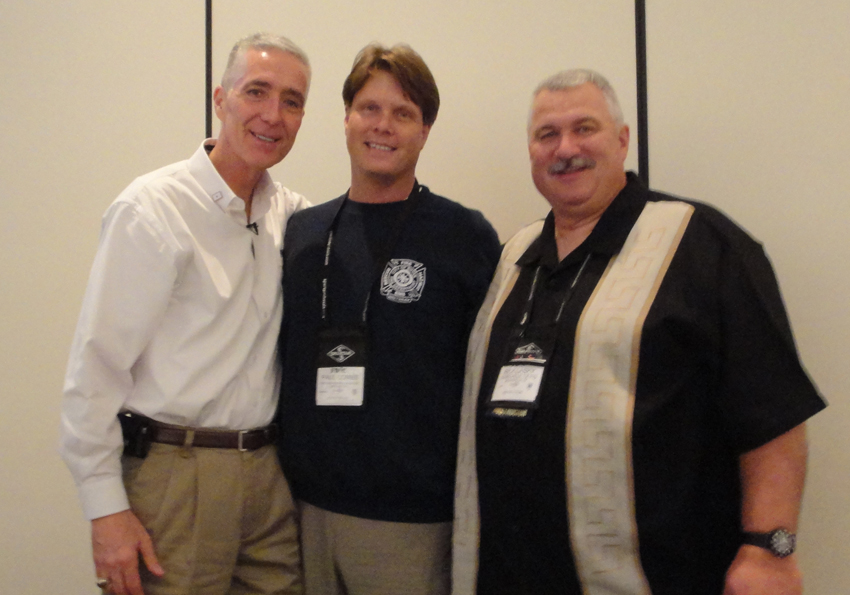 What an exciting FDIC! This year's event was an incredible experience of meeting new friends, laughing loudly with old ones, autographing prints, and book signings. The popularity of Drawn By Fire continues to skyrocket and it's humbling to see it fly off the shelves - I never would have imagined this success!

However, they real joy of the week was getting to meet new…

Surviving on the Fireground

While attending FDIC I had the prividlidge to meet a inspirational firefighter who has authored a brand new book "The Combat Position".

Please check the below article and consider picking up his book you won't be disappointed!

The Law Enforcement has its Fallen Hero's honored in Washington D.C .

I do believe the Firefighters/Fire Police/EMT are due one! This would include both paid and volunteer's. I, being a volunteer, knows how much training, constant education, and time spent away from love ones ,is just one aspect of a firefighter. But we also put our lives on line each and everytime we respond to a call. Whether its a loss from the fire or explosion, or a heart attack or whatever, its still a human…

Big fans of your artwork here !

Please check your email (paulcombs@cityofbryan.net) regarding an annual fundraiser we do here for the Great Lakes Burn Camp. Would love and appreciate a donation of art from you. 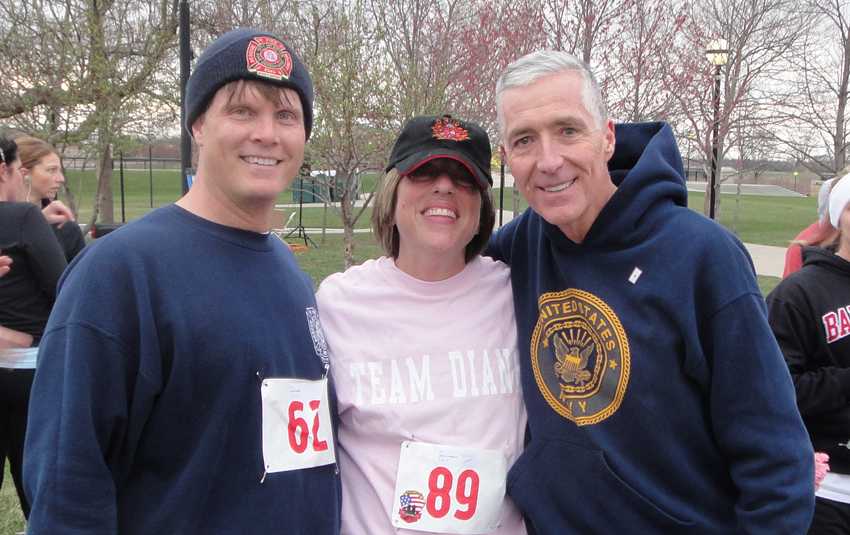 Ran the Courage and Valor 5k this evening and had a blast doing it! Hit a PR with a time of 32:05 - hey, I never said I was fast! But knowing you are wearing a chip-timer tends to get your butt moving a little faster. We had over 300 registered competitive runners with over 850 overall participants. It looked very impressive! With me in this photo are my Fire Engineering…

Posting from my phone because internet connection from my hotel room has been out since last night. Hopefully will get to post more shortly. Sorry.

Are you part of the ONE PERCENTERS ?

For the sports-challenged, my title means that FDNY Capt. Mike Dugan hit a home run with his keynote address.

I was fortunate; like so many of us who couldn’t be there today, to watch the live streaming video. A big shout out and thank you to the FDIC technical staff for making it possible.

FDIC has been described as the Mecca and the Super Bowl of fire conferences. It is Woodstock, Lollapalooza and Farm Aid all rolled into one. And for some, it is like Spring Break at Daytona…

Dressed For The Occasion 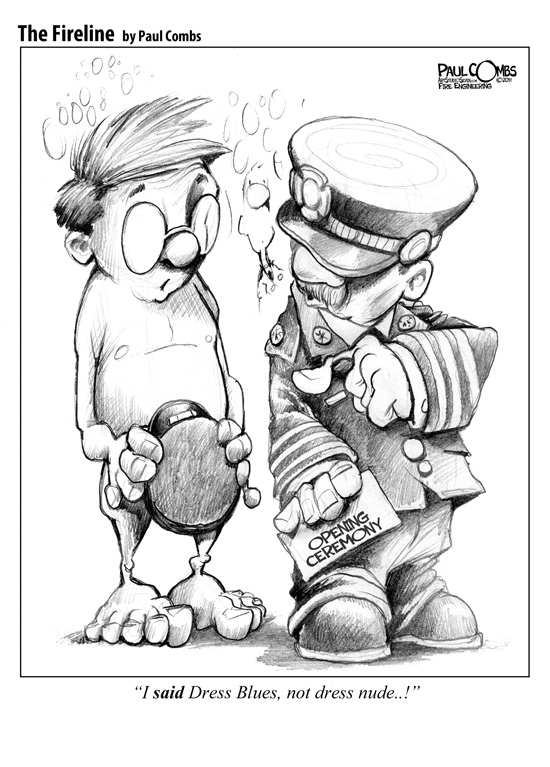 Of course this didn't happened, but it would have been funny!! Ah, the things that run through a cartoonist's head...

Blog Note: Don Rickles (young ones will need to Google) said: “We make fun of the ones we love”. So, feel the love!

For the record, I am a fire district trustee and I have struggled to find a diplomatic way to address my thoughts on this issue, so I am going to just jump in and use my usual recipe of humor, sarcasm and just a dash of cynicism.

There have been several discussions and blogs written on the “aging of the fire service”. Most of the conversations have centered…

They were my boys!

FDIC is, of course, well known for it's first class training. If you want to train with the best and be taught by the best, FDIC is where you go. When you think about the de facto standard of fire training, FDIC is what comes to mind first.

But one of the offshoots of FDIC is experiencing the camaraderie, and, if you're lucky, being able to listen to the…

Back to the basics


During a recent live burn training we discussed different tactics as it pertains to attacking the fire.  We watched the fire develop and had the attendees take turns knocking the fire down and then watching it develop again.  During this evolution we had exceptional thermal layering and smoke that helped reinforce the lesson of "less water is…

Anyone running  a quint as the first out piece? 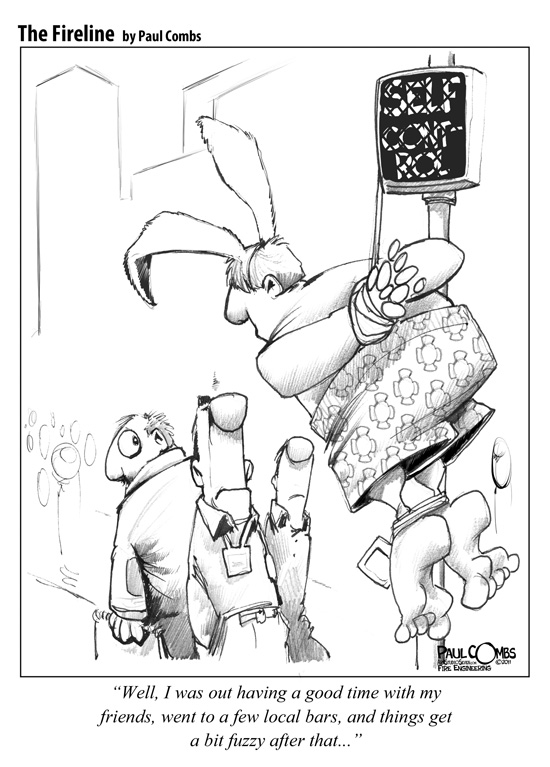 Why is it that every year here in Indy a group of guys have to show the world what an a** they can be? Please! Is it too much to ask that you at least pretend you've been to a city before? I'm not saying you can't go out after hours and have a good time, but grow up and act like a responsible adult. A little self control, please!

That rant being said, there were… 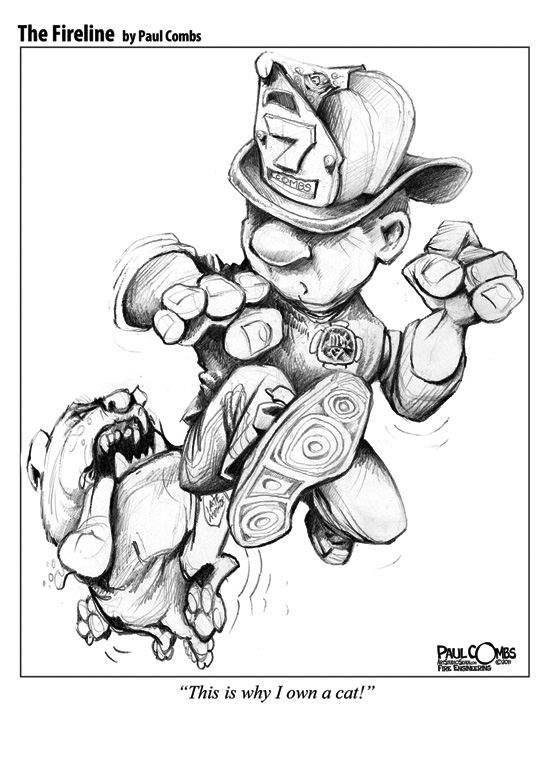 This is not exactly how I wanted to start my blog posts this week, but I just have to share.

I went for a jog last night along Indianapolis' beautiful channel walkway in an attempt to work off the 50 lbs of meatloaf I ate at the Weber Grill. The weather was amazing, there were very few people out and I had the entire path to myself - that is until I met digger (I…

I don’t know if I have been lucky, in the right place at the right time, blessed or a combination of the three.

I started writing my thoughts down and sharing them over 10 years ago; not only on discussion boards, but in op-ed pieces.

It started at Firehouse.com. They were in the process of rolling out a “MembersZone” section and for a subscription, you could get additional content that wasn’t accessible as part of the free membership. I was a charter member of MembersZone and…