It is in great sadness that we as a Brotherhood post the 60th Line Of Duty Death in 2012 from the United States Fire Administration. Fellow Brother Junior Firefighter James Towsend has made the ultimate sacrifice in love for their fellow man. Our sincerest condolences go out to his family and members of the Dagsboro Volunteer Fire Department.

Which type of thinker are you?

Listen to this episode 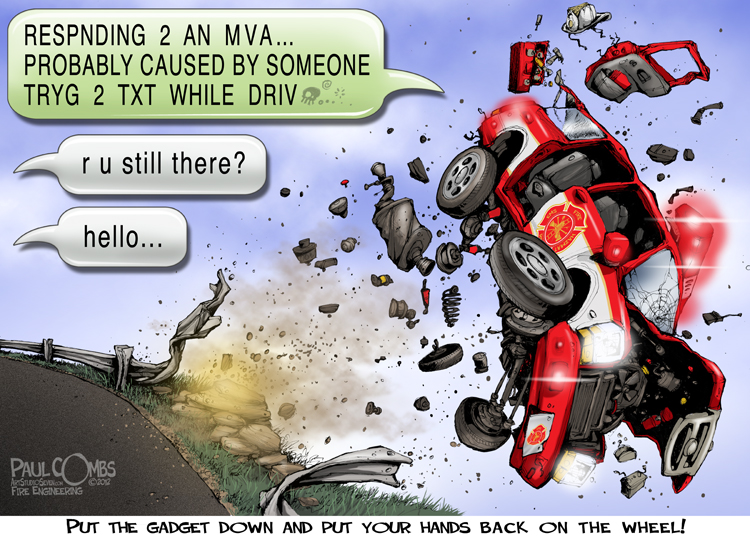 This illustration is in response to the many letters and emails I've received from followers of my commentary. They state that texting and responding in department vehicles or POVs is becoming very commonplace - and has resulted in a few accidents, as well. To be honest, I'm guilty of doing it myself on occasion. Not while responding, but driving to the station or…

In our classes we spend a lot of time showing firefighters how to stay out of and how to get out of bad situations.  Our fire service is seeing an increase in firefighters who are falling through floors into basements or sub-levels.  This is large part due to the engineered flooring systems that do not perform well in fire conditions.

Fires are growing more intense much…

Turn Out the Turnout Gear

Here we sit in 2012 and there is still a need to address. discuss or simply admonish the lack of turnout gear on incidents. We are still seeing chiefs or incident commanders of some sort running into buildings and homes or walking about a mvc with the sole protection of their hand held radios. Then we see firefighters jumping off the rigs wearing a leather helmet and tennis shoes or a ball cap and turnout pants. It makes for a fine commercial for that particular brand of shoes or hat, but…

Motivations of Member's in the Volunteer Fire service

The Chatham Fire Department is in the process of expanding its membership. In order to do so focus needs to be made on what drives member to join and to continue to perform the tasks that are given to them. The purpose of this project is to determine how to keep current members motivated and to provide direction for new members.

To accomplish this, descriptive research was conducted to answer the following questions.

1. How did members become involved in the fire… 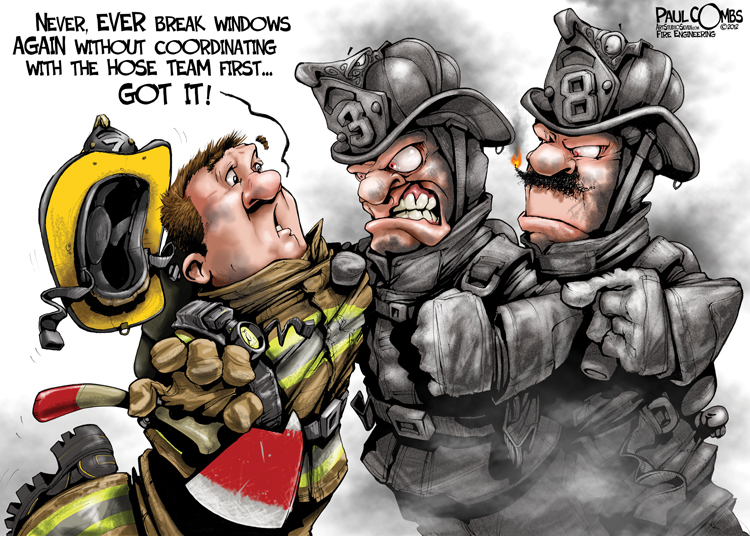 If you've ever had someone vent windows without coordinating their efforts with your hose team, then you'll empathize with these two firefighters. Whimsical look at a very dangerous situation.

It is in great sadness that we as a Brotherhood post the 59th Line Of Duty Death in 2012 from the United States Fire Administration. Fellow Brother & Wildland Firefighter Chris Seelye has made the ultimate sacrifice in love for their fellow man. Our sincerest condolences go out to his family and members of the U.S.D.A. Forest Service .

It is in great sadness that we as a Brotherhood post the 58th Line Of Duty Death in 2012 from the United States Fire Administration. Fellow Brother Firefighter & Captain Neal smith has made the ultimate sacrifice in love for their fellow man. Our sincerest condolences go out to his family and members of the Atascocita Volunteer Fire Department.

As you may or may not know, the great people here at Fire Engineering Online have allowed me to be a Featured Blogger. All my FE post will now be in that section. Thank you to all those who have supported, read and followed me on this amazing journey. So many new friends have been made because of this online forum and I look foward to making many more. So from now on please stay up to date with this link:…

Everyone reads in different manners and within specific media. Some like certain magazines, others certain sites. The technology and speed make it more important to use varied means to get lessons in front of readers. Such is the case of using "Speak Like a Pirate Day" to highlight the never-forget basics. - Bill

Thermostat or Thermometer...Which one are you?

#fireofficertrust "Thermostat or Thermometer" which one are you?

Last weekend several of us competed in the Revolution 3 Cedar Point triathlon that tested varying degrees of endurance.  Does this type of endurance translate into endurance on the fireground?  You bet it does.  Leading up to the triathlon, we trained together and pushed each other to new limits.  Read previous posts leading up to the latest triathlon …

Achieving the Immortality (In Spanish and English)

It is in great sadness that we as a Brotherhood post the 57th Line Of Duty Death in 2012 from the United States Fire Administration. Fellow Brother Firefighter & Fire Police Captain Steven Henry has made the ultimate sacrifice in love for their fellow man. Our sincerest condolences go out to his family and members of the Columbia consolidated Fire Department.

Remembering With Our Actions

Today is a solemn day. Eleven years ago this country was attacked by terrorists and changed us forever. That day is remembered not only for the horrific events of the attacks, but also for the heroes of that day. We lost 343 of the bravest our profession has known and some of the most influential fire service leaders and instructors we have seen.

I understandably get a little reflective whenever September 11 comes around. There’s the usual reflecting on where I was when I first heard the news about the first plane striking the first tower and where I was when the second plane hit. This morning though, I decided to…