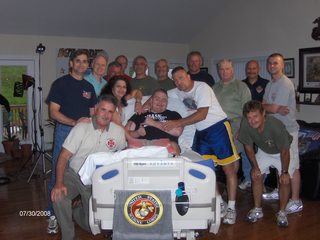 This story should have run Wednesday but it was moved to Thursady see it tonight!!!!!

Eddie Ryan is an American hero, he is a part of the NEXT Greatest Generation of American who are manning our firehouses and our military. Eddie is the son of a marine who in June 2002, after graduating high school immediately enlisted in the Marines for a four-year hitch. One month later, he hit boot camp. In September that year, he left for Iraq, manning a machine gun. He fought in Nasariya and Ramadi, 70 miles northwest of Bagdhad. On April 13, Eddie was shot twice in his head, once in his lower jaw and once above his eye. Eddie was severely wounded and suffered a brain injury. Now, because prayer is going strong for our American hero, Eddie is recovering and doing well.
Watch what the brothers in FDNY are doing to help Eddie, the real heroes recognize other real heroes, not because they are different because in their world they are not.

Comment by Bobby Halton on August 22, 2008 at 11:51am
Please check out this link God Bless the FDNY SE-RATSABC World News/Bob Woodruff:

Comment by Joe Morstatt on August 20, 2008 at 6:07pm
Due to last-minute pre-emptive scheduling (Madrid air tragedy) the full segment is re-scheduled for tomorrow Thursday, 8/21 at 1830hrs. ABC gave us short notice to communicate the change.