It is in great sadness, that we as a Brotherhood, post the 65th & 66th Line Of Duty Deaths for 2016 from the United States Fire Administration. Fellow Brother Firefighters & Lieutenant Christopher M. Leach & Senior Firefighter Jerry W. Fickes have made the ultimate sacrifice in love for their fellow man. Our sincerest condolences go out to their family, friends and our Brothers & Sisters with the Wilmington Fire Department. 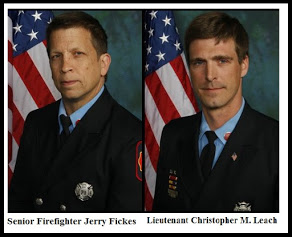 
Incident Description: In the early morning hours of September 24th, Wilmington firefighters were dispatched to a burning brick row home on the 1900 block of Lakeview Road. Soon after arrival, believing that there were still residents trapped in the home, firefighters entered the structure. While searching the interior, several firefighters fell through a collapsing floor killing two of them: Lieutenant Christopher M. Leach, 41, and Senior Firefighter Jerry W. Fickes, 51. Two other firefighters were critically injured but reported to be in stable condition. The family in the home at the time of the fire, including six children, managed to escape through the back of the residence. The cause of the fire has yet to be determined. Investigation into the fatal fire continues by local, state, and federal authorities.