It is in great sadness, that we as a Brotherhood, post the 20thLine Of Duty Death for 2016 from the United States Fire Administration. Fellow Brother Firefighter & Paramedic John Ernest "Skillet" Ulmschneider has made the ultimate sacrifice in love for their fellow man. Our sincerest condolences go out to his family, friends and our Brothers & Sisters with the Prince George's County Fire/EMS Department. 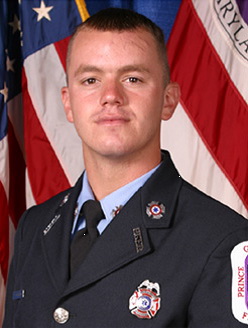 Incident Description: Prince George's County Fire/EMS Department (PGFD) responded to a home for a welfare check call regarding a man with medical conditions that had not responded to relatives attempting to contact him. After arriving on scene, checking for any open doors or windows, and after making themselves known several times, firefighters forced entrance to the residence. As they entered the home, the resident fired several gun shots striking PGFD Firefighter/Paramedic John Ulmschneider, Morningside Volunteer Firefighter Kevin Swain, and the relative who had originally called for help. After being transported to the hospital, Firefighter/Paramedic Ulmschneider succumbed to his injuries. Firefighter Swain remains hospitalized in serious but stable condition. Police said the resident of the home believed his house was being broken into and fired in self-defense. No charges have been filed. Investigation into the fatal incident continues by authorities.


Tribute is being paid to Firefighter/Paramedic John Ernest "Skillet" Ulmschneider at http://apps.usfa.fema.gov/firefighter-fatalities/