It is in great sadness, that we as a Brotherhood, post the 51st Line Of Duty Death for 2015 from the United States Fire Administration. Fellow Brother Wildland Firefighter Michael "Mike" Hallenbeck has made the ultimate sacrifice in love for their fellow man. Our sincerest condolences go out to his family, friends and our Brothers & Sisters with the U.S. Forest Service Lake Tahoe Basin Management Unit. 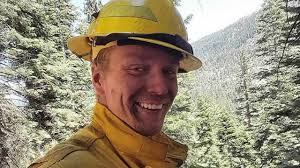 
Incident Description: Firefighter Hallenbeck, a member of Organized Crew 36 on the Lake Tahoe Basin Management Unit, was struck and killed by a tree during the initial attack on the Sierra fire that broke out south of the Echo Summit mountain pass in California. A second firefighter was injured in the same incident but was treated and released from the hospital.


Tribute is being paid to Firefighter Michael "Mike" Hallenbeck at http://apps.usfa.fema.gov/firefighter-fatalities/