It is in great sadness, that we as a Brotherhood, post the 50th Line Of Duty Death for 2015 from the United States Fire Administration. Fellow Brother Wildland Firefighter & Acting Assistant District Fire Management Officer David “Dave” Ruhl has made the ultimate sacrifice in love for their fellow man. Our sincerest condolences go out to his family, friends and our Brothers & Sisters with the Big Valley Ranger District of the Modoc National Forest. 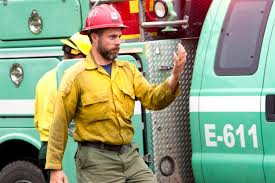 Incident Description: Acting Assistant District Fire Management Officer Ruhl was reported missing during the initial fire attack on the Frog Fire Wildfire in the Modoc National Forest. The Modoc County Sheriff’s Office was called for assistance in searching for the missing firefighter. Search and rescue personnel started the initial search at approximately 2000hrs and continued until about midnight when it was halted because of hazardous fire conditions. Efforts began again at 0600hrs, July 31, and continued until Captain Ruhl’s body was discovered at 0917hrs. The incident remains under investigation by local, state, and national authorities.