Can the Company Officer (CO) increase morale on his/her own? Do you think it’s possible for one person (CO) to change the outlook of firefighters who seem to be down in the dumps, bicker, moan, groan, and complain about how everything in the department is being done wrong or how bad another shift is but never offer a way to correct the issues? I’m here to tell you that it’s very possible, the Company Officer carries the weight of the crew and a good CO can change the morale of his crew through direct and indirect actions.

Morale is defined as: the confidence, enthusiasm, and discipline of a person or group at a particular time. I love to go to work. I would say I have a high personal morale and try to carry that throughout each shift, regardless of what’s coming down the pipes. I remind myself on the daily that I have the best job in the world and would like to maintain my high morale, and to do so I usually surround myself with like-minded individuals and ignore the people who have anything bad to say about me or what’s going on in the department and stay on track to constantly and consistently drive myself towards continuous positive improvement each day in and each day out. When morale is low; it’s very obvious. Doesn’t it seem like the most disgruntled people in your department are always the loudest? Their complaints and problems usually ring louder than the good of what’s going on in the department and eventually those louder voices seem to gain headway and the misery around them gains its company. How is this possible? Why didn’t their CO step in and nip the rumor mill in the bud, or is that even possible? Let’s look at some of the characteristics that a firefighter with low morale may have.

FIREFIGHTERS WITH LOW MORALE MAY:

• Point fingers at their brothers/peers and blame them for things
• Have increased absenteeism
• Less work ethic and a drive to be better
• Grievances are filed more often
• High turnover ratio with firefighters leaving for other departments or jobs
• Less training
• Complain about everything but never offer solutions
• Have a “don’t care” attitude towards customers, runs, and items around the fire house

So, can the Company Officer fix these items? I believe they can, but they may need a little help from the senior firefighters, and more importantly, everyone needs to know that they have a part in increasing and maintaining the morale around the station and to help make the department better. I want members who work with me to be excited to come to work. I want the environment to be so good that people will almost be afraid to take off or call in sick because they’ll worry about missing a good ol’ fashioned firehouse prank, an awesome training that day, or just good comradery with their peers.
I’ve taken several Company Officer classes, including retired FDNY Chief John Salka and Chief Rick Lasky’s Company Officer Academy in Atlanta, Georgia and they offered a lot of things to help with morale and to overall be a better Company Officer but several really stuck out to me and they are:

1. LEAD BY EXAMPLE. The CO can’t be the one in the middle of the rumor mill and holding the spoon while someone else holds the pot. If he’s stirring the pot; everyone else will assume he’s right and start to pass on the misled information and rumors that create a negative impact. We know that not all information passed down to CO’s that is to be passed on to their crews is going to be taken well. The CO really has to find a way to make every situation a positive one and remind his crew that they will work together to reach their individual goals and stay on track to be the best firefighters and crew they can be. So, don’t hold the spoon and stir the pot, because people are watching and they’re going to act accordingly.

2. GOALS. I just mentioned individual goals. I’ve wrote in the past about how Company Officers need to develop individual personnel development plans for each of his members and aid them in reaching the goals they wish to reach. This is a must have. When these firefighters are working towards goals; their minds are almost always taken off of the negative things going around the fire house. They reach these goals and a fire is set under them to reach the next one, and as each goal passes you slowly set each member up for success, and not failure, and they will return the favor to the new guys hired and assigned under them or their crew when they get in your shoes one day. Set goals, both individual, and crew goals.

3. SAY THANK YOU. Why is it so hard for some people to simply say, “Thanks, y’all did a really good job today and I’m proud to have you on my crew.” That goes a super long way. There are a lot of personalities in the fire service and the majority of them like positive re-enforcement; they want to be told they did a good job and know they’re appreciated. Say it often and mean what you say, on the flip side, when things don’t go well or someone needs to be reprimanded then do so behind doors. We don’t want to belittle our peers and embarrass them. If they mess up they need to know that action isn’t acceptable and to fix it, but do so professionally and courteously. 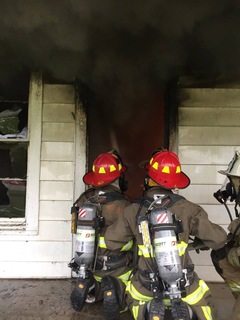 4. LOOSEN THE REINS. Ray McCormack has been quoted to say, “Give me aggressive firefighters any day, I have a leash if needed.” What’s this mean? I believe it means to let the firefighters do their jobs. If you have done your job and trained them to do the right things and to be the best firefighters they can be then not much can go wrong. You don’t need to have the reins on them so tight that you’re thought to be a micromanager. Let them spread their wings; we don’t learn how to be good by doing everything right the first time. So, keep firefighter safety in mind and don’t allow freelancing but allow them to do tasks’ on their own. This can be both on the fire ground and off with items and special projects around the fire house. Give them a task and let their minds do the work.

5. NIP THE RUMORS IN THE BUD. The CO needs to take any rumor or problem he hears of and nip it in the bud as soon as possible before it spreads to his or her crew and don’t allow them to spread the negativity as well. It’s all gossip, and firefighters can be worse than old women when it comes to gossip, so have transparency, tell the truth to your crew, and don’t let any rumors float around. When these items hover in the fire house they get multiplied and added on to by the hour, so end the rumor-mill quickly and cleanly.

6. TAKE THE TEAM APPROACH. When we work together as a team it seems as if everything goes more smoothly. I was asked in my first ever interview question if I could get a 400 pound woman down from the 4th floor of a burning 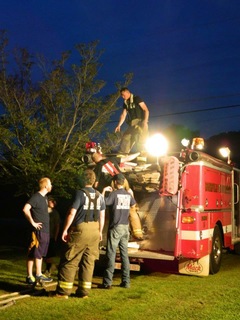 building and my answer was a quick and stern “Yes sir.” He replied, “You really think you can get a 400 pound woman down from the 4th floor of a burning building?” I stated to the civil service board, and him asking the question, that what I couldn’t do on my own would be handled by the team that I worked with and together we would all get the 400 pound woman down from the fourth floor. They all smiled and stated that was the best answer they had heard all day, so remember team work is key, know the strengths and weaknesses of each individual crew member and work to maximize their strengths and minimize their weaknesses by using each team mate to help each other be the best they can be. The CO needs to ask their self where they are leading from, and if they think it’s their office and a computer desk, they probably aren’t leading at all. You need to help run the saws, check equipment, squeegee the bay floor, assist with cooking here and there, jump in with the dishes from time to time, and even get on top and load some hose. We know the rookies have their things they need to do, but after they’ve proven themselves, help out more. It’s actually fun getting four people washing the dishes; one washes, one rinses, one dries, and one puts them away, but most of the time somewhere in there someone gets popped with a wet towel or a “small” water fight ensues! Enjoy your crew, enjoy having a team and people to turn to when you need them most.

7. SET EXPECTATIONS. We can’t measure success or hand out punishment if they never knew the expectations in the first place. Set the ground work for what’s acceptable and what’s not, and most importantly, live up to your own expectations. If you’re standing back and pointing or harping on someone not showing up to AFA’s with their SCBA on and then you do the same thing a week later, how does that look? That reflects on setting the example as well.

8. REMEMBER KEY DATES. Take the time to remember birthdays and special occasions. It takes very little time to make appointment notes or reminders on a computer to remind you of a crew member’s birthday, anniversary, or a special date like one of their parent’s deaths a year prior. This will allow you to let them know you’re thinking of them and if they need anything then to let you know. Firefighters are looked at a “tough people” and this is true to an extent, but remember sometimes we like to keep things inside until it builds and builds and this is un-healthy. Remember those dates to create happy environments on the good times and let them know you and the rest of the crew are there for them if they need y’all on the not so good dates. 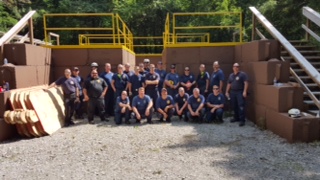 think in the end it all boils down to just doing your job and creating as positive of an environment as possible. There should be no surprises; everyone should know their part of the gig. I would encourage you to not forget where you came from and don’t belittle or step on others to get where you want to be! You’re the leader, so be first in!