Quint Crews Need To Be a Cut Above the Rest

I debated to myself on whether or not I wanted to open this can of worms because of the hate that this piece of apparatus tends to carry along with it. Obviously, after deep consultation with myself, I decided I would open the can and bait the hook too. The title says it all “Quint Crews Need to Be a Cut Above the Rest”. I think this is absolutely true and that is because most people do not like quints due to the fact that the crew members who ride them have to be cross trained for the most part in both Engine Company Operations and Truck Company Operations and this takes some “specialization” away from each complement. The quint truly isn’t that bad of a rig if properly staffed with the adequate numbers and the training is given to the Company Officer and the rest of the crew on how the will operate. If I had to use one word to describe what people in the American Fire Service thought about the quint it would be “misunderstood”. 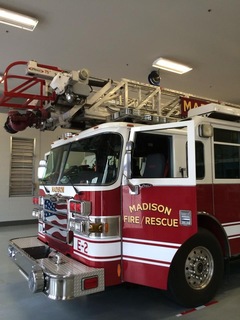 Before we go any further let’s look at what “quint” means. The term quint is short for five. The reason this fire apparatus carries this term is due to the fact that it carries five key pieces of equipment and they are: Ground ladders, an aerial ladder, a fire pump, a water tank, and fire hoses. This means the apparatus can be used as a Truck Company (aerial device and elevated master stream) or an Engine Company (water, fire pump, and fire hose), because this is the case a lot of departments have opted for using this style of apparatus. It’s a jack of all trades and a master of none. I do not by any means think a quint is a cure all apparatus but it really isn’t as bad as most people make it out to be but if I had my choice I would definitely rather have a designated Truck or Engine Company where each crew knew all the ins and outs of their assigned duties but we don’t always get our choice and because this is the case it is vital that the crew riding on this rig needs to be “a cut above the rest” per se’.

So what does that mean? In short it means the crew on the quint needs to be the smartest crew on scene. They have to be very good at Engine Company Operations and Truck Company Operations. We know engine work means finding, confining, and extinguishing the fire and truck work means search and rescue, forcible entry, ladders, ventilation, and all the other task that support the engine work. There is a lot to learn in each complement and to combine them really could put a burden on the crew members that ride this apparatus because it’s almost impossible to train on, and be efficient in, every aspect of the fire ground. The key word is efficient. That’s why I say the members riding on the quint have to be the best. They have to know every aspect of the job and be proficient in each one of them. They really have their work cut out for them, especially if the department they work for doesn’t outline what capacity they will be working in when arriving on scene. If they get thrown to truck work outside the structure then they need to be familiar with locks, forcible entry techniques, saws, and all the good stuff to gain access to the structure for the engine crews. If they arrive on scene and get assigned to engine work then they need to know their fire behavior, smoke conditions, nozzle handling, and more. The majority of departments who respond with quints, or run a Total Quint Concept (TQC), have the assigned duties of each apparatus dictated by arrival. St. Louis Fire Department is the best example I could give for a department that uses the TQC. The first unit to arrive on scene usually takes the Engine Company functions of the scene (fire attack) and the second due unit usually takes the Truck Company functions of the scene (first truck to fire floor for primary searches). The rest of the units arriving on scene are given assignments that are dictated by the fire conditions and the IC. The third due quint can back up Engine Ops and the fourth in quint can back up the Truck Ops, or the third unit may lay in a supply line and then the crew splits and two-three firefighters support fire attack while the other two-three make the roof and open up. The possibilities are endless, which is why each member has to know all the facets of each company’s job.

Regardless of how you’re responding and what you arrive on; the fire scene needs engine and truck work to be completed. The quint is just how you get there. The quint is completely useless if the staffing numbers on board doesn’t meet the demands we will face on today’s fire ground. We can’t do engine and truck work as well without the proper staffing levels, and most fire chiefs and city managers look at a quint as a way to consolidate apparatus’ and reduce staffing levels to save money. The biggest key is training. We have to train the Company Officers on whether to set-up as an engine or a truck and we have to train the Driver/Engineers to be mindful on apparatus placement and operations. It takes an above average Driver/Engineer to be in control of a quint. The placement is absolutely paramount due a lack of reach with most quints. If you’re on a 75’ quint your work is really cut out for you. It is imperative that the Driver/Engineer takes the extra 20-30 seconds to back into a drive or alley to work off the back of the rig and doesn’t just park at the curb or nose in and expect to make the reach to windows and roofs. That 75’ runs out very quickly, heck, even beaching the quint in the front yard might be a decision that has to be made if that makes the reach for life possible. The placement 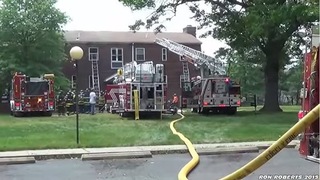 of the quint can sometimes be sufficient to deploy hand lines to fight fire and also have the aerial in the air at the roof or windows, but remember the “engine” needs to pull past and leave the most room for the “truck”. So just because you have that aerial ladder doesn’t mean you don’t pull past and leave the most room for the second in quint. If you’re arriving first-in on a 75’ quint and the second-in quint is 100’, it’s probably best to pull past like you didn’t even have the aerial and allow the most room for the 100 footer. It’s a tough battle, but it is easily worked around if the officer in charge knows his role at each incident and he has a crew that is trained on both sides of the fence like a well-oiled machine. When they arrive he should be able to tell them which capacity they’re working in and they should know what that means. This could be softening the structure with forcible entry, primaries, VES, ventilation work, ladder throws, and all the other truck work or it could simply mean deploying a hand line inside and crawling down hallways in search of life and fire from the line. We run a 75’ quint and it can be tricky on placement and work, especially since most of the houses in its first due are large homes and most often built up on a hill, which makes the reach even harder. Regardless of what capacity we’re in I always try to get the pump set and flowing water for interior crews, once that takes place, I drop the ground pads and put the stick in the air. We have to set a culture that ladders and aerials need to be used. They aren’t mounted up there for the sake of telling ISO we have “aerials”. We need to use them as often as possible because it’s for our safety and can make some work easier. 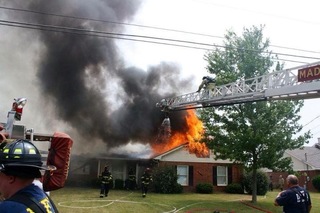 If your department is looking into purchasing a quint for use, or going to the Total Quint Concept (TQC), be sure the rigs are spec’d for that unit’s individual response area and not the department. You have to take into account of the structures it’s responding too individually (commercial or residential), the reach needed, the street sizes in that district, bridge weight limits, restricted areas for turns, rig weight, clearance ceilings, equipment being carried, water supply in that part of the city, the staffing levels, and so much more. I would highly recommend going with more ground ladders than the manufactures like to tell you can be put on the rig (yes I’m harping on ladders again) and go with tandem axle for a lengthier aerial, more weight allowed, and more compartment space. Training is the key so be sure your department’s training program is prepared to train members for quint use. Quints can be an excellent resource, but only as excellent as the crew members arriving on them and coming off going to work!

**Photo of the quints in the yard credit to Bristol Township Fire from a working apartment fire a few days ago.

Good article Chad.  Did you sit in on my quint class at FDIC 3 years ago?

Good Points Chad.  Many who own these apparatus are often misinformed. Most 75' quints are actually a 65' aerial with the manufacturer using the first ten feet from the ground to the turntable to account for a total of 75'.  Now if your truck is 36' long, and you are using the truck off the nose you have less reach than a three fly 35'.