Milwaukee, Louver, Rochester Peak, Syracuse, Tee Pee Cut. What is right for us?

What is right for us?

I had the opportunity to attend FDIC the past month and was fortunate enough to take the eight hour HOT class Urban Essentials.  If you ever get the chance to go to Indianapolis for FDIC take Urban Essentials, lots of skills that you can take back to your home department and implement.  At Urban Essentials one of Milwaukee’s finest truck companies demonstrated the Milwaukee Cut method for performing vertical ventilation on peaked roofs, after the demonstration we broke off into groups and practiced the skills for that cut.  It is a great, safe and quick method of getting a large ventilation opening, IF YOU TRAIN ON IT.

One of the questions asked before the demonstration was, “Who here cuts peaked roofs and how?”  I raised my hand and answer the question to the best of my knowledge and the answer simply was, “Yes we do, and it depends on who is working.” (This is not an discussion about weather or not to vertically vent, if you have questions about that I suggest you talk to Chief Jim Walsh of vententersearch.com, amazing speaker and has a great presentation) This isn’t right and it isn’t wrong in my mind, some people are more comfortable with one type of method over another.

Here in Upstate, NY vertically venting a peaked roof is not a four letter word, it is very common practice, most of the roofs in Upstate are peaked due to the snow.  I have been lucky to learn quite a few ways to open up a roof in my career.  The method I learned  was in FF1, the Louver Cut.  This cut at the time was performed working off a roof ladder but we were “tethered” to the ladder with what is known in the area as a “Wydra Belt.”  A “Wydra Belt” is simply a Lineman’s Belt.  The belt had a wire rope, six feet in length.  On each end of the wire rope was a carabiner and sliding along the wire rope was a very large carabiner.  We would clip the large carabiner to the top rung of the roof ladder and unclip one small carabiner, this would act as a stopper knot, and we were able to “swing” off the ladder and preform the cut.  In my home department this went by the wayside because of NFPA standards.  We still preform the louver cut but not on peaked roofs that we need to work off a roof ladder. 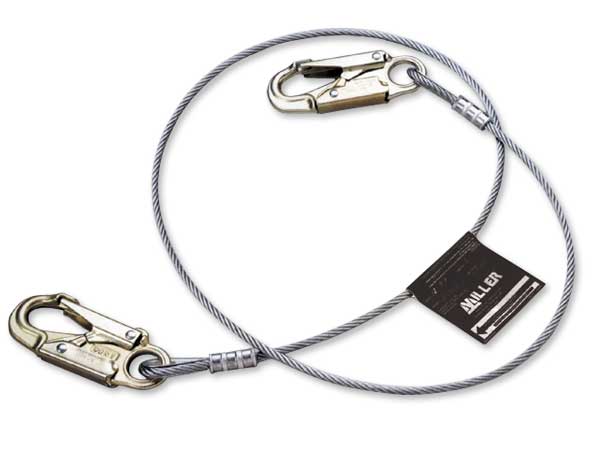 Above Pictures are the Lineman Belt and the Six foot wire rope tether.  Missing on the wire rope is a large carabiner that would slide along the wire rope.  The two small carabiners would be attached to the side attachment points on the belt.  Depending on which side of the roof ladder we were working off would dictate what side would be our attachment point.  If we worked off the right side of the ladder the left side carabiner would stay attached and the right side would slide up and lock in the large carabiner which would be clipped onto the top rung of the roof ladder.

The second cut that I learned was the Rochester Peak Cut.  Here it is know as just the Peak cut.  All cuts are done while straddling the Peak of the roof.  Another caveat about Upstate NY, we have a lot of legacy construction with dimensional lumber roofs built with ridge boards and rafters.  The firefighter can gain access to the peak of the roof by either Aerial Ladder or Ground and Roof Ladders.  Once on the roof and the location is determined for the vent opening, the firefighter makes numerous vertical cuts, starting low and pulling the saw back towards the peak (I was taught to use the box vents to gauge where to cut, roofers do not instal box vents over a roof rafter, if there are not box vents but ridge vent, pull up some ridge vent to expose where the rafters are), the more vertical cuts the easier the h*** is made.  Once all the vertical cuts are complete the firefighter can either stretch and make a diagonal cut across all the vertical cuts or take a cut across the peak overlapping all the vertical cuts.  Once the saw work is complete a second firefighter finishes off the opening with and axe or a maul. 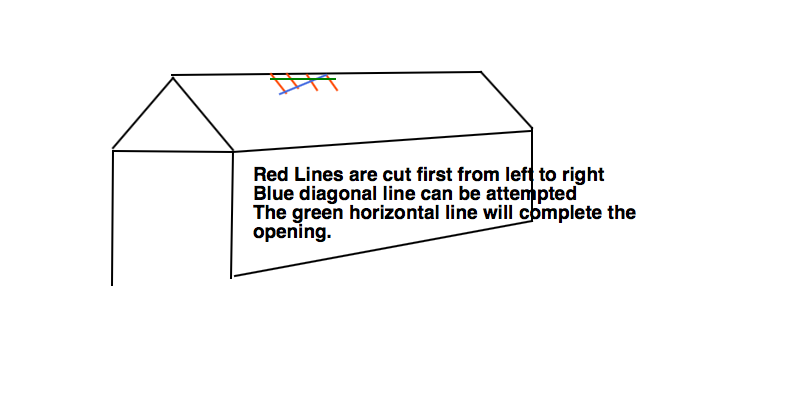 The third cut is more of a myth, I think, but we have trained on it in my home department.  While I was in my Recruit Fire Academy at the NYS Fire Academy, an instructor mentioned a cut called the “Syracuse Cut.”  I apologize to any Syracuse Firefighters that read this, I have no verification that this is truly how the City of Syracuse vents peaked roofs.  I only refer to it as the Syracuse Cut because an Instructor (who will remain nameless) called it the Syracuse Cut while explaining the method.  The way it was explained and the way we train on it is in simplistic terms, is a Milwaukee cut preformed off of one roof ladder.  The saw firefighter starts at the top of the roof (peak) and makes horizontal cuts every two feet or so, about eight to ten feet down the ladder, four to six cuts.  After the horizontal cuts are finished the firefighter makes a vertical cut by running the saw along the edge of the roof ladder overlapping all the horizontal cuts.  Once all the cuts are finished a second firefighter finishes off the opening with and axe or maul.

The third, fourth and etc cuts, like the Milwaukee, TeePee and Box are all cuts we watched on a video or read about in a magazine and went out an did actual hands on training for it.  I won’t do the methods any justice by describing them.

The point I am trying to make is there are 100 ways to skin a cat we all know this in the fire service.  Milwaukee does their cut because they have done it and trained with it for 100 years and are very good at it.  The City of Rochester preforms the Peak cut very efficiently.  When I answered the question at FDIC “Yes we do and it depends on who is working” is a great answer. My department trains on a variety of methods because we face a variety of roofs.  If we come across an older home that still has a tongue-in-grove decking we can use the TeePee, Milwaukee or Box.  If we have an older home but with a newer roof on it using either half inch plywood or half inch OSB, we can use the Peak Cut ore Louver Cut.  New construction with light weight trusses we most likely will perform a cut from the safety of the roof ladder such as the “Syracuse Cut” or the Milwaukee Cut.

Some of these ventilation methods are more geared towards departments that are able to get an aerial apparatus in place such as the Peak Cut, not saying it cannot be accompished with ground ladders.  Some cuts are great from an aerial device (bucket or straight stick) as in the TeePee, and some are strictly from ground and roof ladders. If we were to have an SOG that stated we will preform ‘x’ cut method for vertically venting peaked roofs, we would kinda be handcuffed to some extent.  Giving the Company Officer options is a great fireground tool, you just need to know when to use said tool, very cliche I know. Not one cut is right. Get out there and train and see what works for you.