It is in great sadness, that we as a Brotherhood, post the 11th Line Of Duty Death for 2015 from the United States Fire Administration. Fellow Brother Firefighter & Sergeant Kenneth M. Stanton has made the ultimate sacrifice in love for their fellow man. Our sincerest condolences go out to his family, friends and our Brothers & Sisters with the Sandy Springs Fire Department. 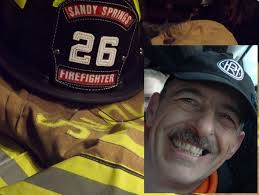 Incident Description: Sergeant Stanton was directing traffic at the scene of a previous vehicle accident when an approaching vehicle drove around emergency equipment and struck him. Stanton was immediately treated at the scene and then transported to the hospital where he passed away from injuries sustained. The driver of the vehicle who struck Sergeant Stanton is being charged with felony driving under the influence resulting in death and leaving the scene of an accident.


Tribute is being paid to Sergeant Kenneth M. Stanton at http://apps.usfa.fema.gov/firefighter-fatalities/