In part 1 we focused on window failure. Now we will be focusing on door failure. When I was first taught to enter a second floor window without the protection of a hand line to search a bedroom (VES) I was taught to immediately close the door. I was also told if there was no door, find a door, take it off the hinges and put it in place. Today, many beat the drum that there is no reason to include the “I” (isolate) into the VES acronym. We have all heard it “if you were taught the right way we don’t need to add the I”.  My reply back is why would we not want to add the “I” to make sure this critical piece of the skill is not ever missed. It’s that important and that critical to shut the door so why not?

During the UL-FSRI testing they found the following results on the door burns.

There was only one door failure experiment conducted. Failure was defined to have occurred when the unexposed surface of the door sustained burning. All of the doors failed at approximately 300 seconds. There was very little difference between the two hollow core doors. The fire ignited the unexposed side and quickly consumed what was left of the door. The solid core door had a similar failure time but the mechanism was different. Door 3 was a six panel door so where the panels were located on the door burned through because of its reduced thickness. The thicker portions of the door remained intact at the termination of the experiment. This experiment shows the fire containment ability of interior doors during a well-ventilated compartment fire is approximately 5 minutes. For the doors evaluated in this experiment it can also be concluded that the type of wood had no noticeable impact on failure time.

The doors evaluated in this experiment demonstrated that the type of wood had no noticeable impact on failure time. The failure time was dictated by the thickness of the door. The hollow core doors had the same overall wood thickness as the panels of the solid core door and therefore the fire breached them at very similar times. 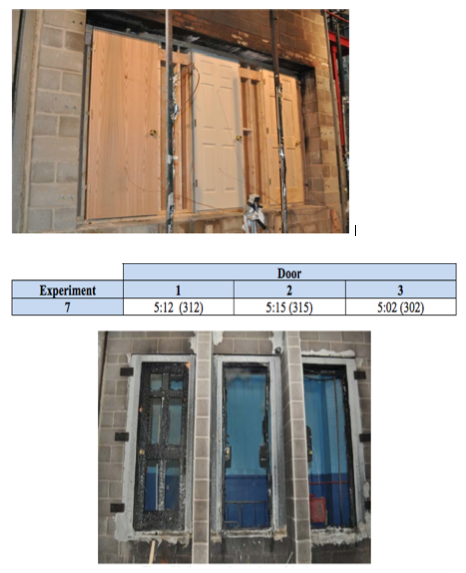 As incident commanders, officers and firefighters we must place a focus on timing. The timing it takes you and your crew to arrive, make the stretch and flow water. We must understand how long it will take your crews to get to the roof and open up. We must know how long it will take to mount a successful transitional attack. We must know how much time we have to commit companies to the interior. From the moment a fire starts, the clock is ticking. We must have a clear understanding what will influence that clock, how long we can safely operate and how long it take our crews to deploy and complete their tactics.

While the science is advancing the fire service each and everyday it is important to remember Engineers can't predict the time to failure and neither can firefighters.  Hence the need to size-up, wear your PPE and SCBA when you are in a building that you think is on fire, cool the gases to take away the potential of a rapid transition to flashover if a window fails, and operate from a location so that you are upwind of the bulk of the exhaust gases if possible.  Bottom line expect that the window or door will open/fail when you least expect it!

We must begin to combine the research with our experience while watching the clock to increase our fireground coordination. We must begin to adapt our tactics based on the clock, construction type and how the fire is behaving from every inlet and outlet. We also need to be able to successfully predict new flow paths and take actions to prevent additional unnecessary flow paths on our fireground.