Captain Laura Larson volunteered to help instruct the Omaha Fire Academy Class of 2012.  As the Chief of Training, this is where I had the distinct pleasure of working side by side with Laura.  Lasting 17 weeks, this academy took place during one of the hottest summers on record with temperatures regularly in the upper 90s and low 100s, and would be a challenge for all.

Laura Larson was hired by the Omaha Fire Department as a part of the recruit Class of 2000, and was assigned to Station 34 on the “C” shift during her probationary candidate year. In 2004 she transferred to Engine 20, now Engine 5 in the busy area of Northeast Omaha. Engine 5 is also a Special Operations assignment, so she was trained in hazardous materials, confined space, high angle rope rescue, and trench rescue response, as well as rapid intervention.

In 2008, Laura was promoted to the rank of Fire Captain.

Laura had a background as a college basketball player and youth coach, so her skills and abilities to motivate others were valuable to the Training Academy. So was her passion for duty and her personal character as she always went the extra mile. Over the previous 12 years she had gained the trust of her peers and the entire job.

With the Academy Class of 2012, Captain Larson not only taught the duties and tasks that lie in front of the candidates for the rest of their career, but she was also instrumental in setting extremely high firefighter expectations.

Laura demanded 100% focus and effort from every candidate. Whenever one of the academy class members would misinterpret, shortcut, or screw up an order in any way, Laura would be there to catch it, without fail.  For every slip, every 98% effort, there would be a physical price to pay.  Whether it be pushups, killers, killer-killers, climbing towers in full gear, or laps around the 120 acre training center campus, she made sure that there were consequences to every lack of focus, preparation, or effort.

The fair, but innovative, ways she had to make candidates “understand” both awed and inspired us, her fellow training officers, to push harder ourselves and to raise the bar of professionalism for all.

You see, Laura got “it.”  From her background as a college basketball player, Laura understood that there were never excuses for less than the very best every firefighter has to offer.  And she made sure the firefighter candidates lived that level of commitment every day.  She made 100% professionalism their new norm. But every candidate responded. They didn’t quit, they didn’t lay down. They would show up for work the next morning a little banged up, but ready to go.

She knew how hard she could push them, to failure, and then back again.

Leaders, rather, are the ones who we really trust, only because we know they serve those around them selflessly in the interest of the common good. They push us harder than we think is possible because they know our potential and want us to achieve it. That’s why Laura pushed those academy recruits so hard, because, you see, the job of a true leader is to create more leaders.

Leaders are the ones among us who stand up for what is right, even though it may not be popular or easy. It may even make the faint of heart cringe a little. They make a difference every day, by what they do, the example they set, the expectations they hold for themselves, and those around them.

In the fire service we believe in certain ideals such as Courage, Service, Duty and Honor. Sometimes we lose our way, and these ideals become nothing more than framed words hung on a wall. Laura was a leader because she LIVED these ideals. 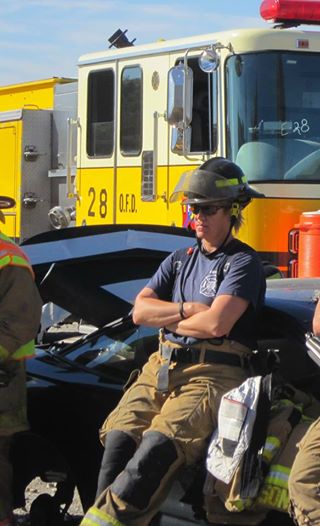 Laura taught me a very important lesson that I will carry through the rest of my life.  She taught me that when you challenge human beings, when you push them beyond what they see as their own internal limits, they respond and exceed your expectations.  But more importantly they will exceed their own!

Indeed, for the rest of their careers, the firefighters of the Class of 2012 will owe a debt of gratitude to Laura.  For every time that they achieve a new height, their very fate was set in stone by Captain Laura Larson.

As a veteran fire service instructor, she taught me to quit “taking it easy” on recruits. Teaching for a couple of different government entities and a community college, I got convinced through both policy and organizational complacency that we had to be nice to firefighter candidates or they might not want to stay and learn. They might not be happy employees. Well, that was B.S!

Career, volunteer, or paying student, the “blessing” she gave me was to quit accepting excuses for less than the highest level of performance because to do so is to leave something on the table.  To do so is only hurting the recruit firefighter, and will hold them back from becoming an excellent firefighter.  When you help someone else see their own potential, allowing them to see the light of excellence through sweat and failure and then success, they start carrying their own torch.

Laura passed away May 9, 2014, as a result of a hard fought battle with cancer.  She is honored on the IAFF Fallen Firefighter Memorial in Colorado Springs.

Our job now is to learn from the way Laura lived her life, to find the courage within us to pick up the torch that Laura lit, move forward, get back on the rig tomorrow and carry on the way I know SHE would want us to.

Like everything else she set her mind to, she fought this last fight courageously until the very end.

I write this, not in sadness, but with thanksgiving that we all had the chance to experience Laura’s friendship, and to witness her strength and spirit as a true fire service leader. Not because she had a gold badge, but because she had a gift and a passion.

We have lost many fire service siblings over the last year.  Let us all honor them by exuding compassion, and servant leadership over the holidays and beyond.