It is in great sadness, that we as a Brotherhood, post the 96th Line Of Duty Death for 2013 from the United States Fire Administration. Fellow Brother Firefighter & Lieutenant Jeff Little has made the ultimate sacrifice in love for their fellow man. Our sincerest condolences go out to his family and friends and our Brothers & Sisters with the Waycross Fire Department. 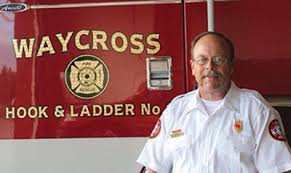 Incident Description: Crews were performing overhaul operations on a residential structure fire when the ceiling collapsed trapping Lieutenant Little. Rescue efforts were immediately initiated and Little was transported to the Mayo Clinic of Waycross where he succumbed to injuries sustained in the collapse. According to fire department officials, the fire has been ruled intentionally set and Lieutenant Little’s death is being investigated as a homicide.

Tribute is being paid to Lieutenant Jeff Little at http://apps.usfa.fema.gov/firefighter-fatalities/