On Scene Photos by John Spaulding

There has always been some questioning of the purpose of spending thousands of dollars in rope rescue equipment.  The Gates Fire District really doesn’t have the topography that would warrant a rope rescue incident, we do have some vertical embankments along the Erie Canal that makes up our northern boarder.  It would be a lie if the Canal wasn’t the driving force in our technical rescue cache, but there was some foresight by others thinking that the rope systems would more often be used for extricating a victim from a roof top incident or any elevated platform where our ladder trucks could not reach or there wasn’t any interior access.

This came to fruition an afternoon when both ladder trucks in our district were out of service and an Emergency Medical Call came in for a person down on the roof of a business located in our district.  Since the the staffed Quint was out of service, both crews were running Engines that do not carry any rope rescue equipment.  Both Engines responded along with the Captain in the command SUV (5 Firefighters and 1 Captain), the Assistant Chief also put himself on the assignment and immediately called for a volunteer response to get the Rescue en-route.

The two Engines and the Captain arrived on scene and found a roofing operation taking place on a flat top roof.  The Captain met with the supervisor, while both Engines laddered the building with 24 foot extension ladders.  Two fire fighters started evaluating the patient, who was having an unknown medical problem and started administering basic life support measures.  After the Captain had a discussion with the site supervisor and an additional discussion between two of the Rope Technicians, we concluded the safest way of getting the patient from the roof top to ground level was by using a lowering system with the patient secured in a stokes basket.  Once it was deemed to be a technical rescue, the Assistant Chief took Command, the Captain was Safety/Operations, and one of the Rope Technicians took the role of the Technical Rescue Officer.  Gates Ambulance arrived along with their Chief, one paramedic went to the roof to further evaluate the Patient and the Ambulance Chief assumed the EMS Division.

Due to the on going roofing operation there was not a lot of space to work.  The Technical Rescue Officer decided to use a rooftop HVAC unit as our bomb proof anchor.  We had limited supplies, and due to the size of the HVAC unit none of our webbing, or anchor straps would be able to wrap the unit.  Our only option was to use our dedicated Medic Line as our anchor.  We needed to manufacture two anchors out of one 200 foot half inch rope.  It started with an Double Loop Figure 8 which then wrapped around the HVAC unit and ended the loop with a Figure 8 Bend, this was our first anchor for the main line.  With the medic line still we played out enough rope and tied an In-Line figure 8, wrapped the HVAC unit and had to tie a Figure 8 Bend, with the rope bag, through our previously tied In-Line Figure 8, this anchor was then finished off with another Double Loop Figure 8, this created our anchor for our Belay Line (Picture 1).  After the anchor was manufactured, we used a 3:1 mechanical advantage to raise the empty stokes basket. While the patient was being loaded and secured into the stokes basket, the Main and Belay Lines were being deployed.  Our Belay Line system is a Tandem Prusik Belay using a 3.75 inch prusik minding pulley and two triple wrapped prusik hitches.  Our Main Line system is made up of a Anchor Plate, Rescue Break Bar, Radium Hitch (with a single prusik and a prusik minding pulley) and an extra pulley with prusik for making a simple 3:1 Z-Rig (Pictures 2 and 3).  The patient was secured into the stokes by lashing 1 inch tubular webbing in a “shoelace” pattern over the patient. The stokes “seatbelt” straps were used as well.  We also used a Class II victim Harness on the patient which added our redundant safety factor, this harness was directly attached to the bullring with via a pick-off strap (Picture 4). We used a bridal system that placed the stokes in a horizontal orientation, this was chosen due to the medical assessment done on scene, the patient was having syncope episodes and becoming weak if he stood.  The horizontal orientation made the edge transition difficult.    Man power also was a factor in the decision to not put an attendant on the stokes basket, we did have to over come the basket from swinging into overhead bay doors so we used two tag lines(Photo 5).  Four pieces of 1 inch tubular webbing were used for the transition from the roof to loading the main line (Picture 6).  The Technical Rescue Officer assumed the role of the “Edge Man” and relayed communications between the firefighters on the ground and the firefighters running the Main and Belay line along with communicating with the Captain (Operations/Safety). We transitioned the patient over the edge by putting the foot end over and “swinging” the head end down until the main line was loaded and the basket was properly orientated.  Once the Main Line was loaded with the Patient in the stokes the Patient was lowered via a Rescue Break Bar and the tag lines kept the basket from swinging into the overhead bay doors.  The Patient was safely lowered to the ground, transferred to the ambulance gurney and was transported to the hospital.

The entire evolution went relatively smooth.  In Gates we do a “technical rescue” drill every month, from spring to fall, it usually is technical rope work.  That being said, there were still questions, which there always will be, of why didn’t we just call a ladder company mutual aid.  We discussed this option during the evolution because of the weight of the patient depending on which type of ladder truck was sent to us we still would need the assistants of ropes in lowering the patient down the aerial.  We also realized days after, while talking at the coffee table, that transitioning the Patient from the turn table to the ground might have proven to be even more difficult situation.  We also had some question why didn’t we use the contractors crane that was on scene.  That question was answered by all the “what-if’s” that can occur: When was the last time the crane was inspected?  Has the crane operator ever preformed an operation with a live person on the load?  What if the crane swings unexpectedly and crashes the basket? These “what-if’s” could go on and on.

This job was our districts first Technical Rope Rescue since the implementation of our new standardized equipment.  It proved a couple of things, the first is that our monthly training paid off.  Secondly, it exhibited and justified the need for spending the money on the equipment.  With the training, and equipment now I think that our officers have become a little more confident in our skill set. 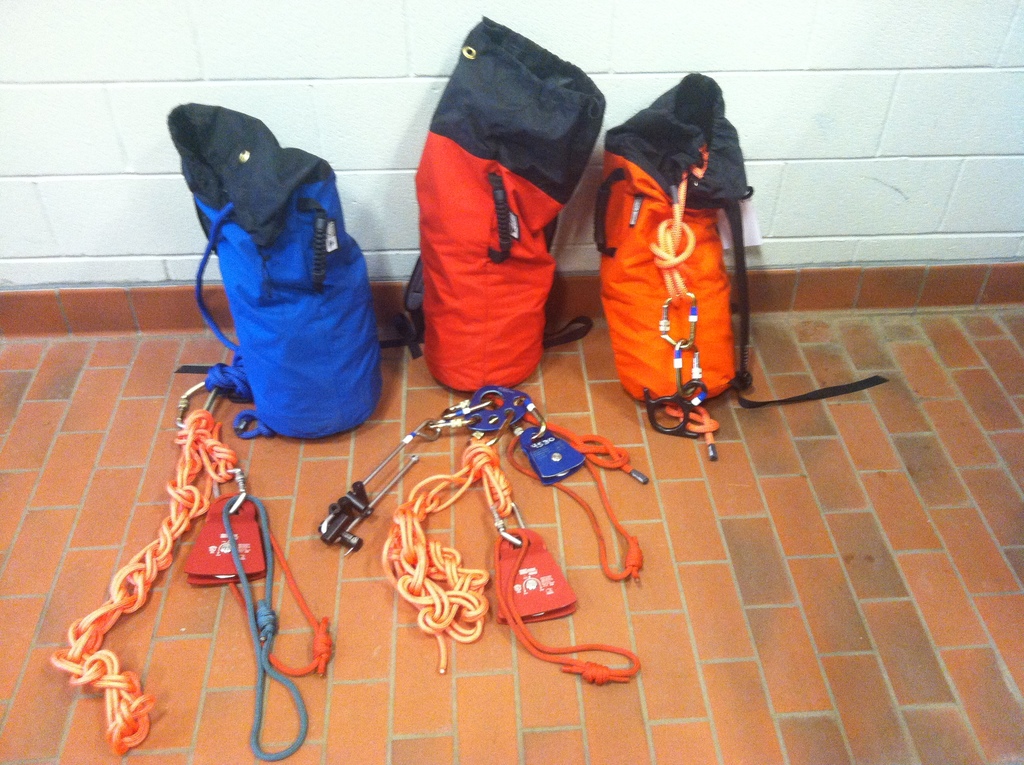 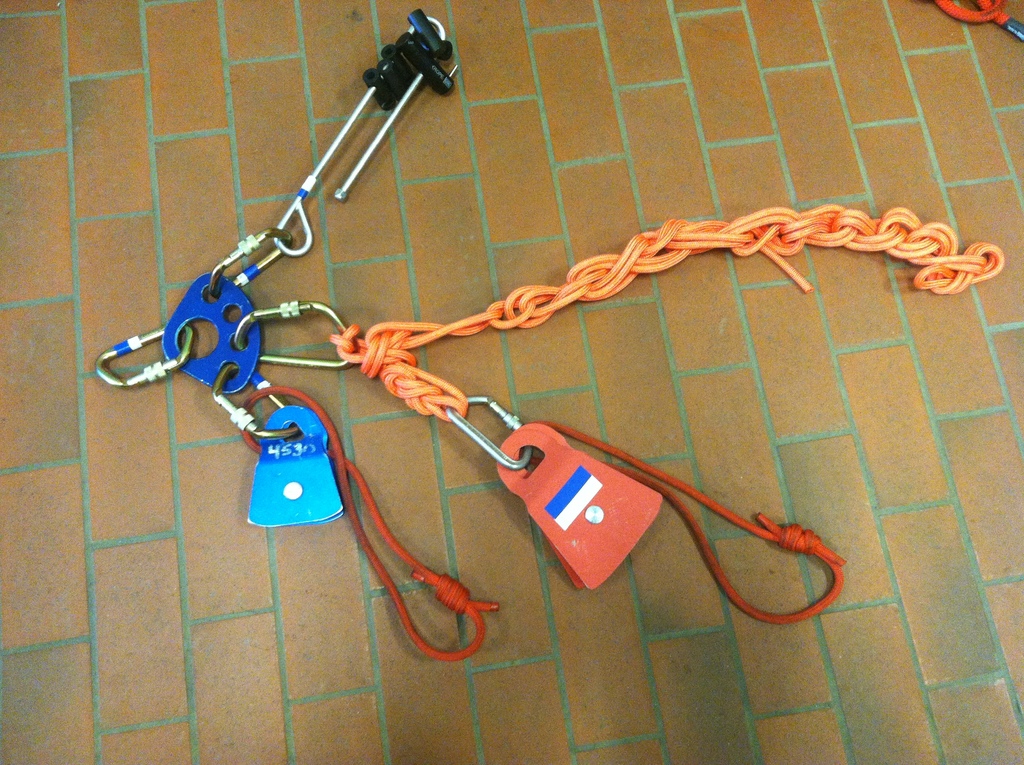 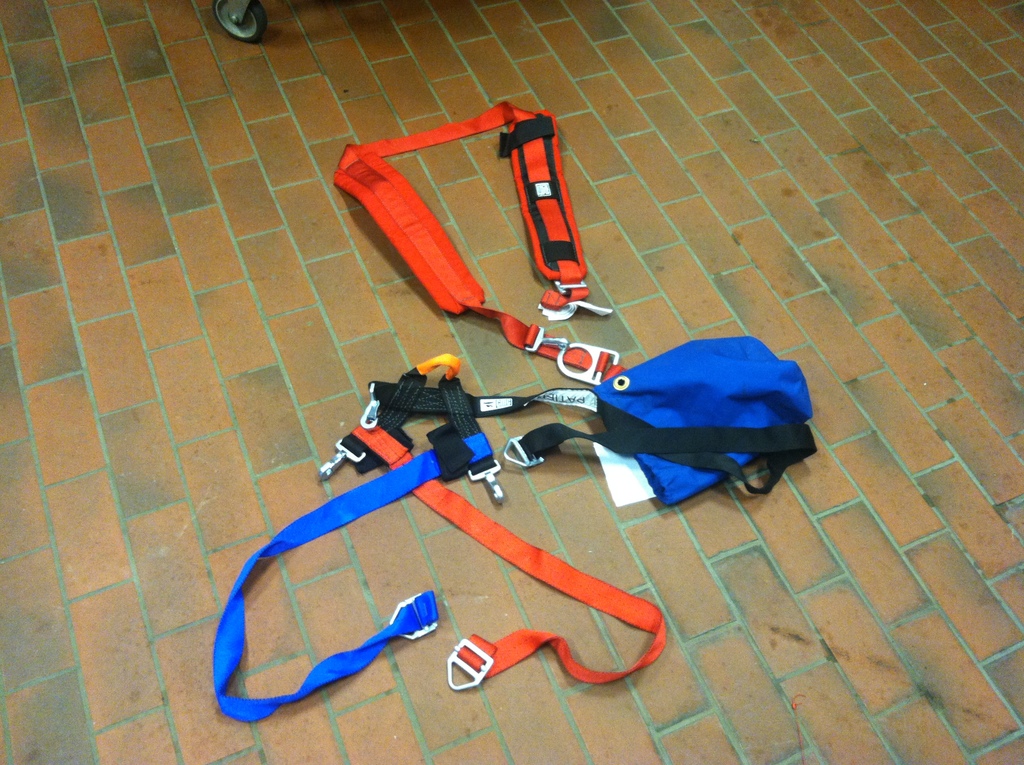 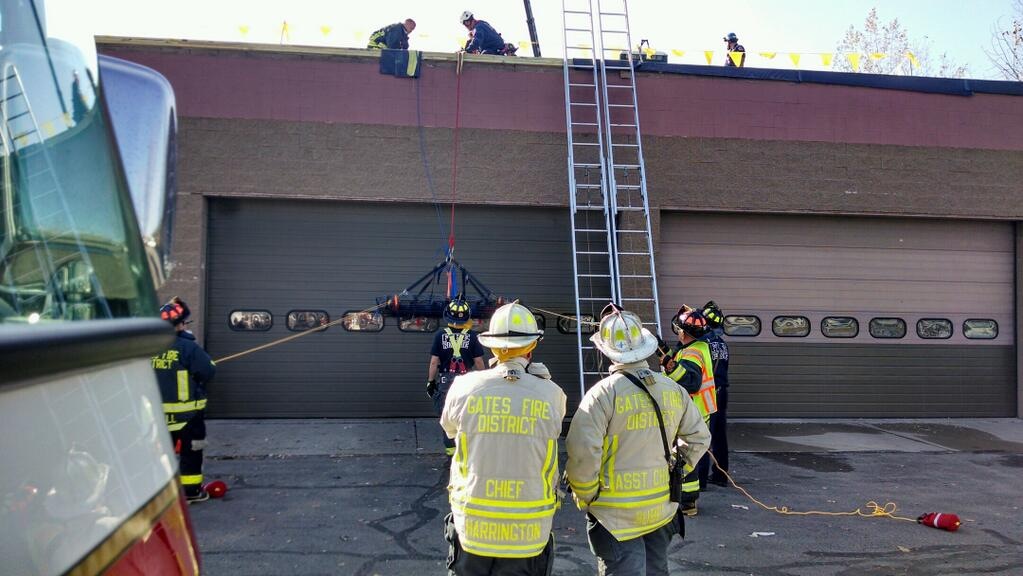