The U.S. Fire Administration has received notice of the following firefighter fatality: MO

It is in great sadness, that we as a Brotherhood, post the 78th Line Of Duty Death for 2013 from the United States Fire Administration. Fellow Brother Firefighter & Assistant Chief Joe Darr has made the ultimate sacrifice in love for their fellow man. Our sincerest condolences go out to his family and friends and our Brothers & Sisters with the Chillicothe Fire Department. 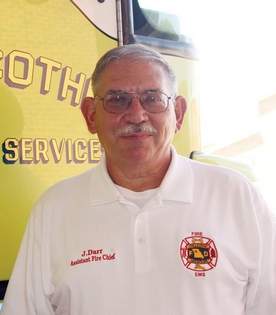 Incident Description: While working his shift and performing duties at the firehouse on August 17, 2013, Assistant Fire Chief Darr was found unresponsive. Darr was transported to the Hedrick Medical Center in Chillicothe and subsequently transported to St. Luke's Hospital in Kansas City, MO. Although he was released by the hospital, Darr was again found unresponsive while still on medical leave on September 4, 2013. He was transported back to St. Luke's Hospital where he passed away that day from a cause still to be determined.

Tribute is being paid to Assistant Fire Chief Joe Darr at http://apps.usfa.fema.gov/firefighter-fatalities/