It is in great sadness that we as a Brotherhood post the 54th Line Of Duty Deaths in 2012 from the United States Fire Administration. Fellow Brother Wildland Inmate Firefighter Jimmy Randolph has made the ultimate sacrifice in love for their fellow man. Our sincerest condolences go out to his family and members of the California Department of Corrections. 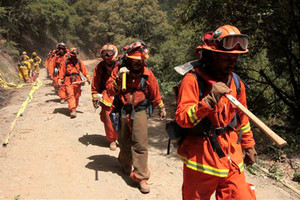 Incident Description: Inmate Firefighter Randolph passed away at Desert Regional Hospital in Palm Springs, California from a cause still to be determined. Within 24 hours prior to becoming ill, Randolph had been assigned to the Buck Fire in Hemet, California.

Tribute is being paid to Inmate Firefighter Jimmy Randolph at http://www.usfa.fema.gov/fireservice/fatalities/