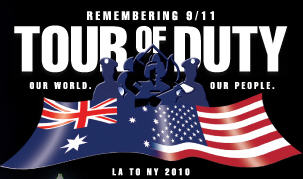 Every now and then there comes a cause, that at the fire service, all firefighters just have to get behind and support 100% The Tour of Duty Run is one of those events. The Tour of Duty Run is a journey that will end in New York City, early on the morning of September 11 2010. The fire-fighters of America and Australia are coming together as allies to remember our fallen colleagues, our brothers and sisters, our murdered citizens, our family. The run is being organized by a bunch of Australian firefighters who plan on running coast-to-coast across America to honor the fallen of 9/11.
The run is dedicated to the memory of all who are among fallen of that horribly infamous day. First and foremost the purpose and intent, to honor their sacrifice, respect their courage, and appreciate their commitment to service and devotion to duty. The run is dedicated to remember them and their humanity. It is also being done with an understanding that so many people have suffered and are suffering to this day, the survivors, the loved ones left behind, the workers involved in reclaiming the World Trade Centre Site, the families, friends and co workers of the passengers and crews of the American Airlines and United Airlines Flights.

It is our duty, our responsibility, our sacred honor to remember what happened on September 11. The run is an opportunity to acknowledge the sacrifices, courage and commitment that is exemplified by emergency services globally. Every day on every continent people are giving of their lives, risking their lives so our world can be a safer place. The military, police, fire and medical services represent just some of the people that give of themselves, so others may live a better life, their service can never be underestimated.

The run will begin on August 12. The runners will begin from the Santa Monica Pier, Los Angeles at 8.46 a.m. you have a chance to share the journey, to remember the people that have suffered and are suffering still. If you just like to make a donation to the runners or buy a T-shirt go to www.tourofdutyrun.com
If you're a runner check out their route it's available on their website and you're welcome to join in at any time they are looking for some folks out of the Chicagoland area anyone out of the DC area and also we still need runners from California in particular Santa Monica or any of the departments in the immediate area. I plan on joining them in California and Oklahoma City.

Currently the organizers are planning a few overnight stops on August 14 in Las Vegas, August 22nd in Oklahoma. August 26th in New Orleans, September 1 in Chicago in September 7 in Washington DC. Now I can tell you from experience at FDIC that these Aussies do enjoy an occasional beer or 12 in order to relax. Go to their site for more information if you're in one of those cities plan on buying the boys a beer.
I can't emphasize how important it is to support these guys, I can't ask you to run but I am. I can ask you to donate but I plan on doing so. Let's get behind these guys let's make sure that we always remember what happened on that awful day. Let's never let anyone ever forget the bravery of Americans and the cowardice of our enemies.

Comment by Corey Andeen on July 2, 2010 at 12:30pm
I would love to be there, but can't. The best I can do is buy a T-shirt, say my prayers and spread the word to never forget. From Casselton, ND please know that our thoughts and prayers are with you.