It is in great sadness, that we as a Brotherhood, post the 82nd Line Of Duty Death for 2014 from the United States Fire Administration. Fellow Brother Firefighter & Lieutenant John Burns has made the ultimate sacrifice in love for their fellow man. Our sincerest condolences go out to his family, friends and our Brothers & Sisters with the Myrtle Beach Fire Department. …

Recently, I have been reading articles on this subject with much uneasiness.

In fact; I hesitate to call suicide a “subject”, because for many; suicide is real and has impacted them. It has reached out and grabbed them in some way. It is someone very close to them, someone they know or someone famous, whose career they have followed.

And, are loved ones LEFT to make “sense…

PUT A TAG ON IT

PUT A TAG ON IT

The Fire Service as a whole and we who are fortunate to be a part of it need triage. In our day to day we seem sometimes unwilling to exercise the same honest, thorough, open and sometimes painful assessment that we use in a mass casualty incident.

It used to be that ventilating residential fires was pretty straightforward.  Even today, the process hasn’t changed, but the difficulties encountered while completing the task have multiplied.  Difficult roofs aren’t new; commercial flat roofs have long been a tough cookie to crack, with an infinite number of roof material combinations and challenges that pop up right in the middle of the cut.  With today’s engineering capabilities and ever-changing building construction technology,… 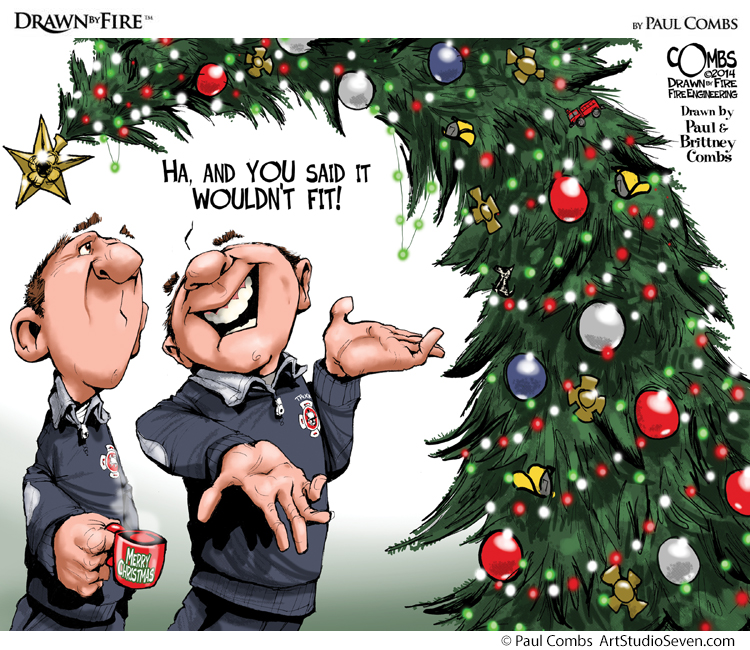 The fire service is rich in tradition, stories, pomp, and legacies - and it is legacy that brings me full circle to this cartoon. Some families can boast generations of service to a community, or having married into another fire service family to carry on a lineage that in some cases spans a century. Me? I’m the first of my family to hear and follow this noble calling, and…

Are We Chasing The Right Things?

Today I read the US Fire Administration’s report on the Worcester Fire from December 3rd, 1999.  It’s a significant fire in terms of life lost and lessons learned.  I’ve read the report before and many others like it, but today something struck me.  It was the description at the front of the report on the condition of the Fire Department at the time of the incident.  I’ve never given too much thought to it before. In some LODD reports you can see obvious problems (now that we know…

So What Are You Doing Around 1745 Hours Dec 3rd

Our youngest members were probably between 5-10 years old, our now more "seasoned" members were proby firefighters trying to learn, fit in, be a sponge, etc. But it's been 15 years since that cold night in Worcester, Massachusetts and if you're reading this without any idea of what I am talking about or a foggy mind I encourage you to take an hour or two from your busy holiday season and web search Worcester Cold Storage".

Is your fire department or municipality’s server and computer system connected to the Internet?  If so, your computer system is probably being attacked by a hacker as you read this article.

Those hackers are seeking information on your department’s EMS responses, looking at patient records, payroll records, emails, and other proprietary and protected information, if released, may make your organization vulnerable to litigation from your patients or your employees. As…

Branding Yourself...And What You Stand For" We have a standard we must adhere to in this business…and that is simply to prepare those who wear the uniform and donn the PPE every single time the bell rings. Those who call 911 are looking to us…

It is in great sadness, that we as a Brotherhood, post the 81st Line Of Duty Death for 2014 from the United States Fire Administration. Fellow Brother Firefighter & EMT Tom Rhamey has made the ultimate sacrifice in love for their fellow man. Our sincerest condolences go out to his family, friends and our Brothers & Sisters with the Western Holmes County Fire and EMS – Lakeville Station.

It is in great sadness, that we as a Brotherhood, post the 80th Line Of Duty Death for 2014 from the United States Fire Administration. Fellow Brother Firefighter & County Fire Coordinator / Deputy OEM Coordinator Arthur E. “Art” Treon has made the ultimate sacrifice in love for their fellow man. Our sincerest condolences go out to his family, friends and our Brothers & Sisters with the Cape May County Office of Emergency Management. …

As I write and I travel to talk and teach across this great country, I am humbled and honored by the feedback and comments that I receive. The comments that always hit home for me are from people who comment that they felt as if we were sitting around the firehouse coffee table just having a chat.…

My buddy Eddie Buchanan (VA) continues to write about transitional attack and the good work the “da guys” (Steve K and Danny M) from UL and NIST have done. He has also discussed S.L.I.C.E.R.S. at length. While Eddie is calling for calm, I’d like step in, support and agree with him. This new found information (which some guys wrote about a long time ago too) is in fact another…