I keep reading how departments insist on using 13/4 lines for Standpipe operations. Usually the set up includes a gated Wye, so a second line can also be stretched to supplement the lower GPM's. How many departments have ever trained on a tandem attack. If anyone is interested in learning more about how to do this leave your information on the comment page. A video on this topic will be available early next year.
Sincerely,
Ray McCormack 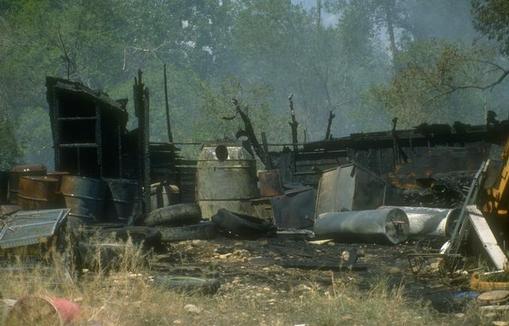 Due to the bizarre weather patterns this winter California got pummeled with rain storms while Oregon and Washington are at a deficit. Nevada and Arizona now have deserts, which have come alive with blooming and greenness. These events are even evident from satellite photos from 100s of miles above the Earth. Even Colorado, Montana, Wyoming are a rain deficits.

The greenery in the deserts… Continue

Does your Agency Have riding positions for Engine and Truck/Ladder positions? Are you familar with the concept? If you are please comment on how they work for you. If so does the assignment have a tool assignment also? Does the Position line up with agency Standing orders or SOG's?

Thanks again to T.S.L and Chief Goldfeder for reminding us to Never Forget!!!

When we think of staffing and Firefighters who gave their lives (especially where staffing was a contributing factor) ...we remember Keokuk, Iowa. Today is the anniversary of the Line of Duty Deaths of Keokuk Assistant Fire Chief Dave McNally, 48, Firefighter Jason Bitting, 29, and Firefighter Nate Tuck, 39...all of whom were killed while attempting the rescue of three trapped kids-who also perished. These… Continue

My brother sent this to me and since we are such caring group of people I wanted to help this young girls wish, which could possibly be one of her last, come true.

This is the true story of my 5-yr old 2nd cousin, Hannah Garman, who was diagnosed with glioblastoma multiforme, a rare and incurable brain tumor. She was going to be the flower girl in our… Continue

There will also be a Celebration of Life, Saturday December 20, 2008

- bring a dish and… Continue

A Fireman loaned has been returned!

It is with a heavy heart and deep saddness that I inform everyone of the Passing Of Micheal DeVaughn Asst. Chief (Ret.) of the Eielson AFB FD, Alaska. Chief DeVaughn had a huge impact on the fire service in Interior Alaska in the early 70's and up until his retirement last year. He was very active in his community and loved to watch his oldest son coach the Eielson Ravens HS football team. Chief was a huge advocate for fire prevention and fire safety throughout his time at Eielson serving as… Continue

Our recent news announcing proposed FAA rule revisions on Helicopter Emergency Medical Services (HEMS) and a public hearing by the NTSB in February 2009 cry out for fire service involvement (see: www.fireengineering.com/display_article/346289/25/none/none/HLTHS/FAA-and-NTSB-react-to-air-medical-crashes). 2008 promises to end as the most catastrophic year in the… Continue

A HUGE THANK YOU TO THE UNIVERSITY FD

I know that we are often sad and overcome by the events that happen to us and change our lives forever especially when it involves someone so loved, admired and close to us. I want to personally thank and applaud the outstanding efforts of the staff and students of the University FD for their relentless drive and long hours they all put in to make a fallen brothers celebration of life a very memorable and encouraging one for us all. I think everyone there felt that had a role to play in the… Continue