The eyes of my grandfather

I had occasion the other day to spend a considerable amount of time with one of today's youth. I was interested to speak with him due to all the discussion nowdays about the state of today's younger generation. I know it seems to be a topic the fire service is finding more and more worth while to address. I see this issue raise in the specific areas of training and management of new firefighters. So on to my meeting, I hope you find it as eye opening as I did.

I was taking an… Continue

My Memory of the Chief

>I wrote this about the Chief late at night, a few hours after I found out he had passed. It has been three days since then and this is the first time I have let this out.

Today is the first time in my young career as a fireman that I have had to deal with losing one of our own. It was not to fire, an apparatus accident or a heart attack on the job. It was not one of these but it is no less heart breaking. It is no less devastating, personally or… Continue

I am a Fire Captain with the San Jose, California Fire Department.

I am also a student at the National Fire Academy (NFA) in Emmitsburg, Maryland. The NFA is part of the United States Fire Administration, which is under the Department of Homeland Security.

I am enrolled in the Executive Fire Officer Program,… Continue 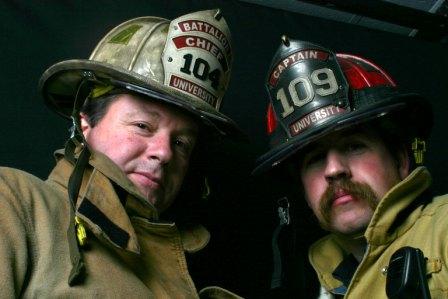 I am sitting alone at last. The firehouse is quiet and I can hear the pipes playing in my head. My Chief has fallen. While we ran from tone out to tone out, he slowly let go. As his boys ran the beat, he went to sleep. I miss him, you know. For some silly reason he used to call me "Watash". I think I'll write that on the back of my helmet. He believed in me.
He was our bull dog, our champion. He loved his men. We loved him. You couldn't help it.… Continue

Ever had to make the choice between ropes, etc. and utilizing a readily available on site crane or lift platform?

Hi everyone I created a group called Our Family in Need . It's a group where anyone can list and share requests for helping our own in need or prayers and condolences for our Brothers and Sisters in the Fire Service and their immediate families. What I listed below is also in my new group.

I have a friend who is a Battalion Chief in a local fd. He has been fighting a good fight with cancer and just got sick and is now in the hospital for the last few days. It appears they have not… Continue

The Role of the Fire Instructor

Fire instructors play a critical role in the development of firefighters. When the recruit begins training, their first exposure to the fire service is the instructor. That experience can often determine the firefighter’s view of training and future classes. Looking back through one’s career in the fire service, or life in general, it is easy to pinpoint teachers and instructors who have made a great impact. What were some of the characteristics of these instructors? What was it about them that… Continue

Lesson on the Human Heart

In the wake of this sad week for firefighters, I can't help but feel bewildered by the attitudes of some firefighters.

Two of our brothers and sisters died this week while completing routine training exercises.
While there is no evidence or even speculation that the recent deaths of FDNY-Probie Jamel Spears, 33 and Volunteer-Cecilia Turnbough, 42, for Dale City Fire-VA were in poor physical shape or that a lack of fitness in some way contributed to their death (nor am I implying… Continue

We have about 6 young men ,that is in training .(Explorers)) One issue that requires particular attention is what the Fire and Emergency Service Explorer will be allowed to do at the emergency scene.Many departments allow Explorers to respond on the apparatus with trained personnel.A solid policy must be established as to what the Explorer may not do once he or she arrives on the scene.
Explorers may not be substituted for trained personnel
''''''''must be equipped with personal… Continue

I just went to and scene where two car accidents was involved .Two deer run out in the road,the car entered the other lane.,and hit on coming car..I want to know what would you do,if deer run in front of your car or truck.
Would you go into on coming traffic,or what?
Their was 3 PI's ,this time,the people was lucky they was not going to fast,on and major hwy.
In our area,deer cross the roads any time of day or night...

Chad Berg, my good friend, wants a story. I have recently read Chief Halton's latest editorial, much on my mind. I take pen in hand,..or keyboard and this is what comes out. Please read it all, the major point is in the end. 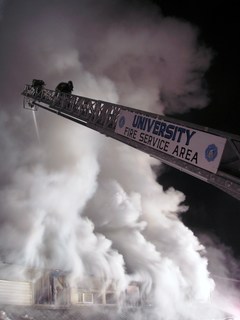 So, Brothers, there we were....Hey, I'm not gonna lie to ya, it wasn't the coldest night in Alaska, we've seen much worse. But lend your ear (or eyes) and I'll tell you a tale of frozen fingers, ears and eyelids,… Continue

The Russians made and vaccine-proof anthrax.The Americans asked to see it,and the Russians refused.If that's not frightening enough,Alibek told Diane Sawyer that Russian scientific publlications have reported a genetic marriage between smallpox and a brain virus called VEE.He believes they have engineered yet another deadly genetic merger -
Infectious diseases may be introduced into an unsuspecting U.S.population not only from natural human,animal,or plant sources but also deliberately… Continue

The Company Officer and Fire Prevention and Investigations