As firefighters, we tend to consider ourselves generally fit and healthy individuals capable of carrying out a physically demanding job.  But are we really as fit as we think we are?  Are our bodies really in good enough shape to handle the frenetic pace of the first twenty minutes at a working structure fire; the extremes of heat we typically encounter during interior fire attack and search/rescue operations?  There is no doubt that the physical demands and stressors placed on the body of a firefighter during a working structure fire are enormous.  It goes without saying then, that a firefighter who is unfit and out of shape posses an inherent risk, not only to themselves, but to the rest of their crew when working in these conditions.

In reality, our fitness must be at a level where we are easily capable of working under physically demanding and challenging conditions for relatively short periods of time (i.e. 20-30 minutes) at a working structure fire; Then having recovered sufficiently enough to be able to attend the next working job within a short period of time and work at the same rate as we did at the first scene.  No one wants to see a firefighter bent over, out of breath in the street, after merely running a length of feeder hose from the hydrant to the pump, or after establishing a ground ladder to make access to the roof of a residential dwelling!  Annual or bi-annual firefighter fitness testing is one way of ensuring that an appropriate level of fitness is being maintained by all operational staff.  The New Zealand Fire Service has a fitness testing regime required to be completed by all career firefighters/officers every two years, referred to as the PCA.

In 2003 the New Zealand Fire Service in partnership with the New Zealand Professional Firefighters Union (NZPFU) introduced a bi-annual firefighter fitness assessment.  The fitness assessment, referred to as the Physical Competency Assessment (PCA) was developed as a means of encouraging the on-going fitness for duty, of all career firefighters. From the newest recruit, through the firefighter/Officer ranks up to and including the National Commander; all staff who have an operational response role are required to complete the PCA.  Volunteer firefighters however, are not subject to the PCA, and are not required to undergo any regular "fitness for duty" testing.

The PCA developed by a team of Sports Scientists from the University of Otago School of Medicine, encompasses six job specific tasks.  The assessment tasks were designed specifically to test a firefighter’s ability to meet the realistic physical demands placed on our bodies while working at a fire/incident scene.

Firefighters undertake the PCA wearing their Level 1/Class B (work uniform including L1 boots), helmet, gloves and an SCBA set (donned, not started).  The assessment is a timed event, with the clock starting at the commencement of the first scenario and stopping at the completion of the sixth scenario.  The time required to achieve a Green Zone pass in the PCA, is completion of the course in less than 7 minutes 24 seconds.  A time of 7 minutes 25 seconds or greater but still less than 9 minutes 19 seconds is referred to as the Amber Zone.  Firefighters completing the assessment in the Amber Zone will be provided with a tailored, self-guided training programme based upon the standard gym equipment provided on each career fire station.  The individual will then undergo the PCA again after a period of training. 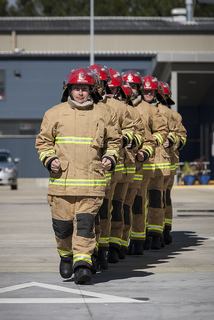 The PCA tasks are described below and completed in the following sequence:

Firefighters will be required to step up and down 25 times on two 20cm stair risers, carrying an additional load of 18kg.  In this scenario an 18kg weight is draped over the SCBA cylinder.  This simulates a 10 metre stair climb with load.  The scenario is completed when the 25th step has been completed.

Firefighters are required to carry a standardised drum of liquid weighing 20kg a distance of 25 metres to a marker cone and return, completing the carry a total of 50 metres.  The scenario is completed when the firefighter has carried the container continuously for 50 metres, without the drum being dropped or put down, and has placed the drum on the ground behind the start line.

Firefighters are required to hoist a 16kg weight, by rope (through a pulley), to a vertical height of 10 metres and lower it back to the ground.  The firefighter must maintain a stationary position and utilise a hand-over-hand technique (without wrapping the rope around their hand).  The scenario is complete when the weight has been hauled up 10 metres and returned to the ground.

Firefighters are required to drag a victim weighing 90kg, a distance of 10 metres to a marker cone and return (total distance 20 metres).  An anatomically correct rescue mannequin is utilised in this scenario and is fitted with a shoulder harness.  The scenario is complete when the firefighter has dragged the victim (utilizing the harness straps) around a marker cone 10 metres away and returned to the start for a continuous distance of 20 metres without dropping the victim.

Firefighters will be required to step up and down 25 times on two 20cm stair risers without an additional load.  This scenario simulates a 10 metre stair climb without load.  The scenario and total PCA is completed when the 25th step has been completed.

Scenarios are spaced 30 metres apart, with firefighters required to walk at a self-selected pace between each scenario.  The walking transitions effectively provide a period of active recovery from the bouts of high intensity exercise required to complete each scenario.

All firefighters, regardless of gender or rank are subject to the exact same assessment and associated time parameters in order to be deemed to have successfully completed the PCA.  To insure uniformity of testing and fairness to all firefighters throughout the country, the PCA is conducted utilizing a standardized set of testing props over the same measured course. With the introduction of the Physical Competency Assessment, came the introduction of a fully equipped gym on each career station.  Firefighters were provided with initial instruction in the gym and a basic workout programme to ensure exercises were performed correctly, thus reducing the risk of injuries during training.

Gym equipment is standardized across fire stations throughout the country, so no matter whether a firefighter is stationed in a large metropolitan city station or a small provincial fire station they can expect to have access to the exact same equipment to train with.

Firefighter participation in fitness training in fire station gyms has increased significantly over the years since the introduction of the PCA, with the result being a continual, steady improvement of fitness levels being achieved across all career ranks. 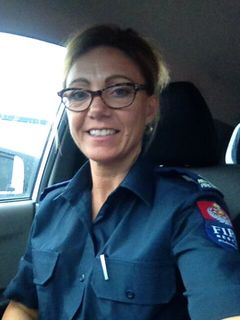 Disclaimer: The opinions voiced in this blog post are mine, and do not necessarily reflect those of my employer.