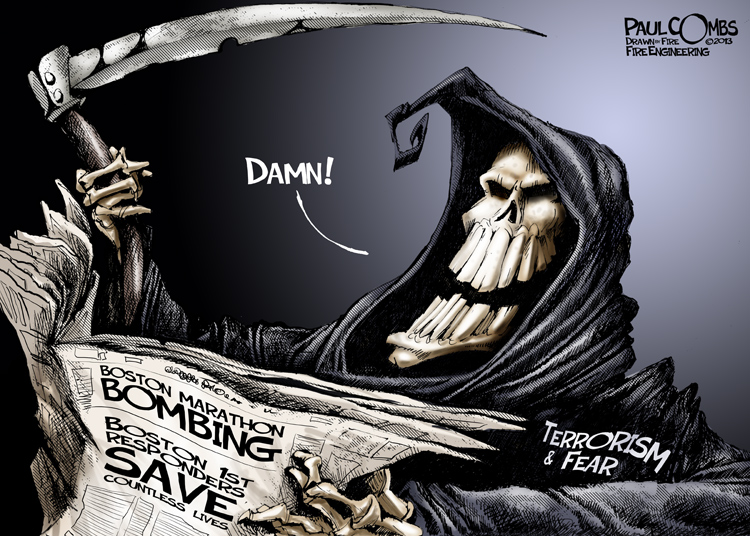 In the aftermath of yesterday's cowardly act of terrorism in Boston, and as the injury report began to rise, I could only think about how much worse this violent act could have been if not for the quick action of Boston F.D., P.D., EMS, and U.S. National Guard. As I sat and watched the same horrific images over and over, my thoughts, prayers, and empathy were for our brothers in red and blue who were dealing with the carnage first-hand. But I have to admit, as the injury rate climbed, and the death tole stayed pat, I swelled with a sense of pride.

Terror and violence is an ever-present, ever-growing reality for the U.S., and the world. A world in which combatants are not targeted, but the innocence of everyday life. But something that the terrorists overlook, whether abroad or domestic, is the American first responder will ALWAYS be there to stop the pain, the bleeding, and heal their blow. We will not cower, we will not run, we WILL fight their demented cause and the inevitable devastation with our every breath. They will not win! Because as long as the American first responder is on the job, fear will not overcome hope and perseverance.

The American first responders are super heroes without capes, and they gave death a very bad day yesterday in Boston!

Sometimes we have to live with the images that we recorded of the emergencies attended ... We do what we vocation and technique allows, a laudable work of the fire department in the tragedy suffered in Boston.
Best regards on behalf of the Fire Department "Nuevo Milenio 155" in Lima - Perú.

Kudos to Boston for good planning, response, involved civilians and talented EMS, physicians, nurses, military, our brothers and sisters in Blue and all of those resources available to assist those injured. Horrible tragedy and hopefully they find those who perpetrated this heinous act.

Don't blame you. What is p****** me off is that all of the pundits and politicos are making it a partisan du jour.

People's lives changed forever yesterday. America changed, but for the politicians, it's the same old song and dance. Boston didn't happen because of sequestration. It happened because a subhuman scumbag wanted to send his hate message. May he rot in Hell.

Just a little passionate and pissed this morning!