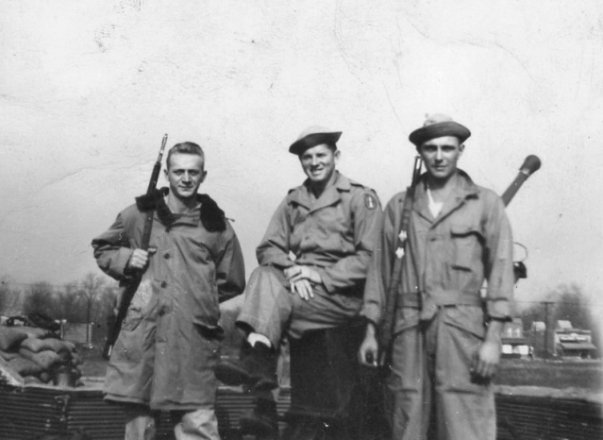 Note: Dad is on the right as you look at the picture.

The envelope measured four inches wide by six inches long. It has held up rather well. It almost has a waxy feel to it. I am sure that it was white at one time, but is now a dark beige color.

In the top, left corner scribbled in pencil is: “after 5 days return to Pvt. W. H. Goodrich, Fort Leavenworth Kans".

In the top, right corner of the envelope are the postage cancellation lines and the word “free”.

Inside the envelope is one page of what appears to be paper torn from a pad of school note paper. It measures five and one-half inches wide by nine inches long. Written in pencil is the following:

Just a few lines to let you know I got down here OK. Got in last nite about 9:30 and got up at 4:30 this morning. Sure was a change for me. Well how do you feel by now. I hope you are fine. I sure hated to go to bed last nite all by myself.
I was talking to Carl P. today he said the folks was up at Winterset last nite did you go along if you did, did you have a good time? Well sweetheart I guess I’ll ring off for now And please take care of yourself and don’t worry about nothing tell all the folks I said Hello.
Don’t write till you hear from me again because I probably won’t be here long enough to get any mail. Over
Well honey I guess I’ll close this time. And until I see you I’ll be thinking of you all the time.
I’ll write later.

My dad passed away in 1992, having served in both theaters of World War II. Yes; his nickname was "Gotch".

Like many other soldiers, he said good-bye to his pregnant wife, his parents, his brothers and sisters and left to serve his country. I have his GI-issued Bible, a small, olive drab version that zips up. It is my most cherished possession of Dad’s. Inside it is a uniform patch (Tech Staff Sergeant) and a picture of him on an anti-aircraft gun in Washington, DC; his gig after he returned to the States, while awaiting his discharge.

My mother passed away in 1999. While we were clearing out her apartment, I found a small suitcase to the back of her closet and inside the suitcase were letters and cards that they exchanged while they were apart.

This letter that I share with you is to show you what gave our soldiers their strength. Letters were the only mode of communication for the three years that Dad served in the war.

No phone; no Internet; just letters written in pencil on tablet paper.

When we discuss the importance of writing; ultimately, the discussion will turn to those who don’t feel that writing skills are important.

But, I can tell you that writing letters that clearly communicated feelings exchanged between husband and wife; mothers to her sons and daughters; and boyfriends to their girlfriends gave those serving in the war the will to accomplish their mission.

And THAT is powerful!

I hope that Dad’s letter to Mom has given you all warm hearts and good thoughts on this Veteran’s Day.

I miss you, Dad and I am so very proud of you and thankful to those who have served our great country and continues to serve us all over the world.

Comment by Jean clak on November 13, 2010 at 12:41pm
There is a song specially written for our great American soldiers and veterans
at youtube under " nameless heroes by miyeh"

Comment by John K. Murphy on November 12, 2010 at 10:31am
Very powerful. The written word has a lot of meaning and conveys more personality than electronic media - thanks for sharing