Here is one of our instructors from Engine House Training, LLC showing some very simple techniques for webbing storage.   He is going to be running a series for different uses of webbing, so stay tuned!

What's In Your Pockets: Wire Cutters

When we started offering classes and offering hands on training, the one thing we wanted to make sure of was that the training was as realistic as possible.  We had all attended hands on training drills and classes and we know what we liked as a student and what we didn't.  So, when we run our drills we want the student to have as realistic of an experience as possible in a safe…

Two Questions to Ask Yourself

I get asked frequently by up and coming firefighters all of the time about what they
should concentrate on in order to be prepared for promotion. Of course, there are the
typical replies about certain types of training and education along with career
development paths. Most are enthusiastic and really into the job and others want an
easy way to a gold badge.

Take a look at the pictures and think about getting water on the fire to the upper floor and/or making rescues.  This building is one that is old and not sprinklered.  It sits off of the road and aerial access is extremely limited, almost ineffective.…

Take a look at the video and let’s have a discussion. It is not a critique of what the video shows, but more of what are our considerations if we pull up to this fire. We all have buildings like this one and depending upon our resources and response area, how would we deploy on this fire? Watch the video and ask and discuss these questions with your crew:

Jason Hoevelmann presenting "A Firefighter's Own Worst Enemy" at FDIC 2012

A Firefighter’s Own Worst Enemy: A Synopsis

When I created this class it was in response to my own attitudes and behaviors that I had developed over a period of time. During those 18 months of “darkness” I allowed outside influences to dictate my perception of the fire service, what my job is and should be and the direction of my future. Luckily, I had other influences around me that recognized I was drifting and helped to set me back on course.

After I was re-calibrated I…

Tools for a Purpose

We have taught a lot of classes and trained extensively on numerous firefighter operations. One thing that always interests me is the choice of hand tools by firefighters. Each has their own preference and favorite, but in many cases when challenged as to why that specific tool is their tool of choice, the answer is not clear to them.

Here are some more pictures from my A Shift buddies, Jim, Bob and Dave at Florissant Valley Fire Protection District. These photos show the challenges of just getting into some of our buildings. It’s a lot easier to get a good look at the working mechanisms and traits of these obstacles during daylight and in non-emergent situations.

Take time to know what is behind these doors and grates. What are they protecting and how secure are they? Is just a…

Challenges Everywhere--Get In the Buildings

Hey, here are some pictures sent to me by a Brother who is going out the DOING the job. The whole job.  He and his crew are getting out and checking on things.  Bob gets IT and thanks for the pics.  These are in his still area and these are buildlings that get inspected and then they go right back to doing this kind of stuff.   We have to be prepared for everything and anything.  Imagine being the RIT and forcing the back door to make access for a Mayday and…

This past weekend we at Engine House Training, LLC had the distinct honor to interview and just talk with some of the leaders of the fire service at the 31st annual Missouri Winter Fire School. We were able to sit down with Billy Goldfeder, Dave Dodson, Forrest Reeder, Doug Cline and John Norman. To say the least, it was a great time. Click on the photo below to hear all of the podcasts. We also sat down with some of the great firefighters that attended. Challenge coins were flashed with two…

More Building Construction for Size Up

Here is a quick look at a building that offers more than one considering in regards to construction characteristics. The building in the photos is currently a resale shop. This building has been a tack shop, lawn equipment, sold boats and trailers. If you look hard at the front, it has been added onto.

We have all heard and been taught to do a 360 of the structure during a working fire.

There is some debate, but this is becoming common practice and there are several things to look for.

The picture is a bulk head for a basement. We have always been taught and trained to look for and create a secondary means of egress for upper floors. Well, it’s no different for basements.

When you make entry, especially if the fire has not been isolated, make sure that either you open…

A couple of weeks ago I wrote about "The Sickness" in the fire service. There was a great deal of conversation from this post that was constructive and on point. I must admit that I wrote it with this post in mind. Actually, this post came to me before that one did, but I wanted to define the problem in a way that most could relate to.

While reading the responses to the post a great guy and respected chief posted a response, "OFFICERS" as the solution. I couldn't agree with him more… Continue

If you have a high rise or respond on mutual aid to a high rise district, do you know if they are marked for floor identification? If so, do you know how they corresspond with the interior labels? High rise buildings are marked differently, if at all. In our area the windows are typically marked with a reflective sticker, one on every fifth floor. Where this gets tricky is when the interior floors are labeled differently.

I occasionally get requests for advice on problems others are having in their respective departments. The topics range from how to get away from officer elections, officers who don't train, senior firefighters who are not buying in to new ideas and how to get their departments to train more. Every situation is different and it is tough to offer much without being directly involved. So, inevitably, I offer a diplomatic thought, which I hate to do. But, we know there is always two sides…

Take a look at the pictures and ask a few questions. There are always variables that we don't know about using a still photograph, but we can put ourselves in that picture and think about what we would do. The idea is to consider different approaches and outcomes and keeping ourselves ready should a similar even occur. 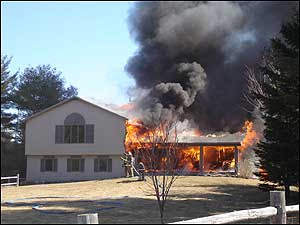 1. Is there tenable space in this…

Anatomy of a Basement Fire:Basic

Here is a short video that you can use for a drill or training night. Feel free to use however you like. This is from a recent basement fire and what was looked for and what was done. There are some considerations to think about. This is not everything for all basement fires. Just a simple tutorial. Feel free to add your experience and ideas to this video.

I've done it and you've done it. It is going to happen again and it's going to happen soon. With every line of duty death the Monday morning quarterbacks come out and tell us all what they should have or should not have done. We preach and teach to learn from these tragedies by understanding the circumstances surrounding the incident. But, what are we doing to make sure that this doesn't happen?

Our job is dangerous. Worcester Fire Department is a highly trained department and… Continue