My idea of a quint is more simplistic and easier to explain.  The real difference between a quint and a traditional ladder truck is that the quint is designed to function as an engine (attack lines, booster tank, pre-connected hose, etc.) with an aerial device on it and the ladder truck is designed for getting to high places and to be pumped in to for elevated master stream operations as its primary function.

There are some nuances that could be argued about what the differences are, but there is no doubt that a quint presents its own special set of challenges that every officer operating on one must consider. There are benefits as well, but this is not an article about whether a quint is good or bad, rather to address the real challenges of operating on one.   It could be argued that being on a dedicated engine company, rescue company or truck company is easier than operating on a quint and having to fill multiple roles on any given call.

These are some challenges that I came to realize and understand after being a company officer on a 105’ quint that was fairly busy.  The demands on our company was similar to those all over this country; be all things to all people.  We ran EMS, vehicle and technical rescue, hazardous materials, building fires, and any other incident that you could think of.

Our responsibilities were always dictated based on order of arrival and needs of the mutual aid agency.  This creates a challenge for any company, but it also never gets boring.  Here are few items for any company officer on a quint to consider and understand when operating on a quint.  This is not an exclusive list, just a short list of the most significant challenges we identified as a company.

The first question begs to know “who am I” in terms of what my role is as an officer and crew when operating on a quint.  It can be a challenge in more ways than one.

First, when training we must focus on many skills and that come with the services provided or expected from the apparatus. For example, when I was a captain on our quint we would move up to St. Louis City FD and were typed as a hook and ladder.  Our job there, and on other assignments was to be a truck company and to operate as such.  This required us to be good and familiar with those skills.

Knowing that we could be called to fill the role of an engine company or a truck company required us to train and to get proficient at more skills.  The problem is not the desire, but the time that is available to fit it all in.  A dedicated engine company may spend a little time on truck skills, but they largely focus on their primary function; deploying and moving attack lines.

But, as I mentioned above, we enjoyed the challenge and worked hard to be proficient is those areas, creating some awesome training opportunities.  We just want to avoid the “Jack of all trades and master of none” when it comes to our proficiency on the fire ground.  This is by far the easiest challenge to work with and overcome.

Quints are designed and built to be an all-purpose apparatus.  In doing so we may have to compromise in some areas to accommodate that system.  One of the areas that we see reduced significantly is the amount of water in the booster tank.  Depending on the configuration and how much emphasis is put into other areas of functionality, the water tank can be as small as 300 gallons.

As the officer on the quint, you must be very intimate with your flows and stretches and how they relate directly to the amount of tank water you have available to work with.  It can have a direct impact on your standard operating guidelines in regards to water supply for first due companies.  A lack of knowledge beyond the fact that you have 300 gallons of water is setting your company up for failure.

We must drill and train on a regular basis to determine our limitations with tank water and fire flow.  Gaining that intimate knowledge will better arm you for the call that doesn’t go exactly like you expected.

A great way to ensure this is to flow test your lines and know exactly how much time you have with each attack line. If you don’t have flow meters, Curt Isakson has some great information on timing your tank at Countyfiretactics.com.

Looking at what is trying to be accomplished with the quint, fire attack and water supply is in the equation.  There are small hose beds and crosslay trays for attack lines built into these designs.  Anybody that has ever worked on one will tell you stories of loading supply line by sliding hose up through a shoot under the turntable and how cumbersome that was.  Although great design improvements have been made, in most cases there are still significant limitations as it relates to hose capacity.

Here are some considerations for you as the officer regarding hose and line deployment. 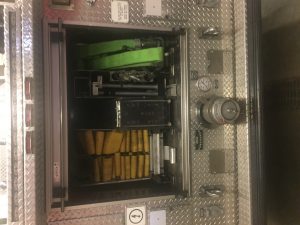 Depending on your standard operating guidelines are written, it is likely that if you’re running a quint, when it is first arriving it is the first attack engine.  This can vary per agency, but it is common for the  only apparatus with an aerial device in a department to arrive first and be the first due engine.

This can cause some positioning issues, even when the quint arrives after the first or second due engines.  As first arriving, it is the standard to get three sides of the fire building, which could put your aerial devise at a disadvantage from a positioning standpoint.  Extra care and planning needs to be conducted to ensure that the full potential of the quint is available on fires.

As we have discussed in the other areas of consideration of the quint, we again have to understand the limitations of space.  On some quints ground ladders take a back seat.  There are many configurations, but it is not uncommon to have some challenges in regards to access, number, and length of ground ladders.

Some examples of the bullets above might be like our situation. We don’t have a 35’ ground ladder on our quint. I was told because of the slide out hose beds and the water tank, there wasn’t enough room for the larger ground ladder. It was a trade-off to try and get as many options as possible on the apparatus.

As you can see, there are limitations in many aspects of operating on a quint.  It’s not an indictment of quints, just some challenges that the company officer must understand and learn to overcome when operating on similar apparatus. Over the years design and technology have allowed for some improvements in these apparatus and we see some of the same issues with engines designed to be all things to all people.

The important thing is that you are intimate with your apparatus and are aware of its limitations and capabilities and that you learn how to operate with consideration to both.