Firefighter Down from Suicide.

As a firefighter, we face death in a million forms every day.  It could be the crash of a falling roof beam, entrapment in a quick-moving blaze, or the slow poison of the toxins we’ve accumulated in our lungs.  But there’s one that seems to make some people especially uncomfortable: suicide. 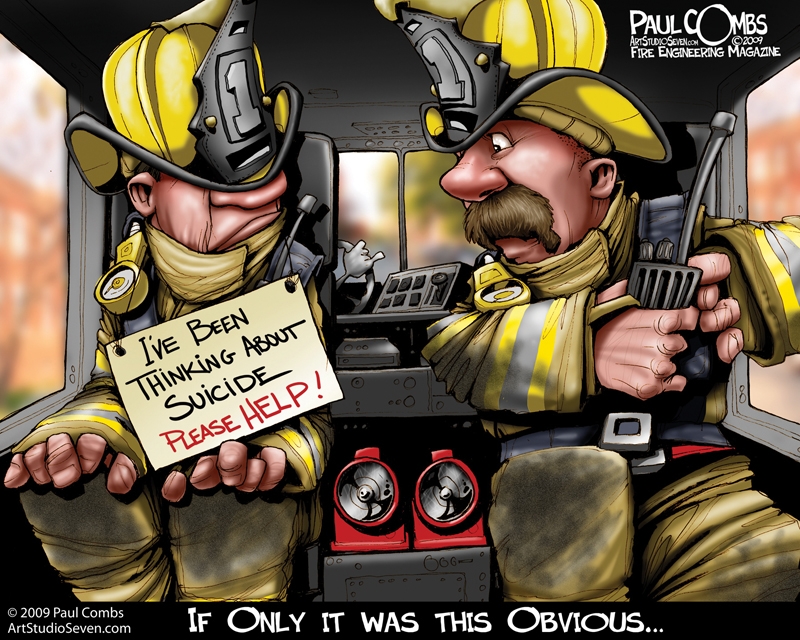 For those of us who have never felt the urge, it can be incomprehensible that anybody would want to take their own life.  Out of the pain and guilt of those left behind, accusations arise: selfishness, weakness, moral inferiority.  The Bible tells us suicide is a sin; Dante imagined a forest in the Inferno where the suicides were twisted into wailing trees, forever trapped in their misery.

The most useful way of understanding suicide is to view it, not because of character flaws, but because of a person experiencing a level of suffering that is literally unbearable. When a human being experiences pain beyond what is tolerable, they will take any means necessary to alleviate that pain.  For some unfortunate people, the only way out that they can see is through death.  Suicidal people are suffering, and often have been suffering for a long time, and look forward to the future and see only more suffering, more disaster.

Society has largely recognized the issue of PTSD and suicide amongst returning veterans.  However, the prevalence among America’s firefighters is generally less well-known, even to other firefighters. This is unfortunate, as it is one of the true hazards of the occupation.  A firefighter is three to four times more likely to die by their own hand that in the line of duty.  Of all the dangers, inherent in battling blazes, all the myriad hazards we know we must mitigate, this is the one that’s taking us out - three to four times as often. It appears firefighters are great at mitigating corporeal hazards, but perhaps less effective at mitigating problems inside ourselves.

In 2016 alone, 125 first responders have taken their own lives.  This is a little higher than usual, but roughly average.  Most years, a little over 100 first responders will die by their own hands.  Many, many more will struggle with urges and make attempts.  So who are these people?  The Institute of Medicine has compiled a list of backgrounds most common to suicidal people:

Does this sound like anybody you work with on your team?  If your department or crew is like most, it probably does.  These are exactly the people we know and work with in fire.  Young people - many of them male.  Many of them struggle to make ends meet.  Plenty are impulsive. I’m sure we all know a firefighter or two who has a “work hard, play hard” attitude when it comes to alcohol - it might even be ingrained into your unit’s culture and traditions.  Then, on top of that, we throw 80 pounds of gear on them and send them into the most stressful situations any human can ever experience.  Every day, we must live with the knowledge that we are responsible for the lives of others - that even a small mistake can result in injury or death of another firefighter or a victim. This is what the Institute of Medicine refers to as “acute and chronic stress”.  Odds are good that somebody you know in your department or on your crew is struggling with suicidal ideation right now.

So, what can we do to help? In the macho culture of fire, talking about feelings can be somewhat taboo.  This is especially true for deep, troubling feelings like an urge to self-harm.  In the past, many of these issues simply went unspoken.  However, that does seem to be a changing trend.  Fire programs have been acting to increase suicide awareness and discourse, but with so many individualized programs across the nation, it can be difficult to understand exactly what steps are being taken.  Government agencies do not track firefighter suicides or firefighter mental health resources.

The best resources for a suicidal person are mental health professionals.  But many suicidal people are wary of reaching out to these providers.  As a fellow firefighter, you can be an effective resource to a suicidal coworker.  If somebody expresses an urge to harm themselves, it is imperative that you take them seriously.  It may be a cry for help.  Try to open a dialogue with them.  Remind them that they are not alone, and that you care about them, and why.  Listen to what they say without judgment.  Remember that suicidal people are not psychotic or insane; they are normal people dealing with an overload of grief.  Urge them to seek a professional counselor.  They may need help doing this, as suicidal people can sometimes become so despondent that they can’t perform simple tasks like make a phone call.  Don’t abandon them, even if it gets frustrating.  By simply being there to listen, you can save a life. 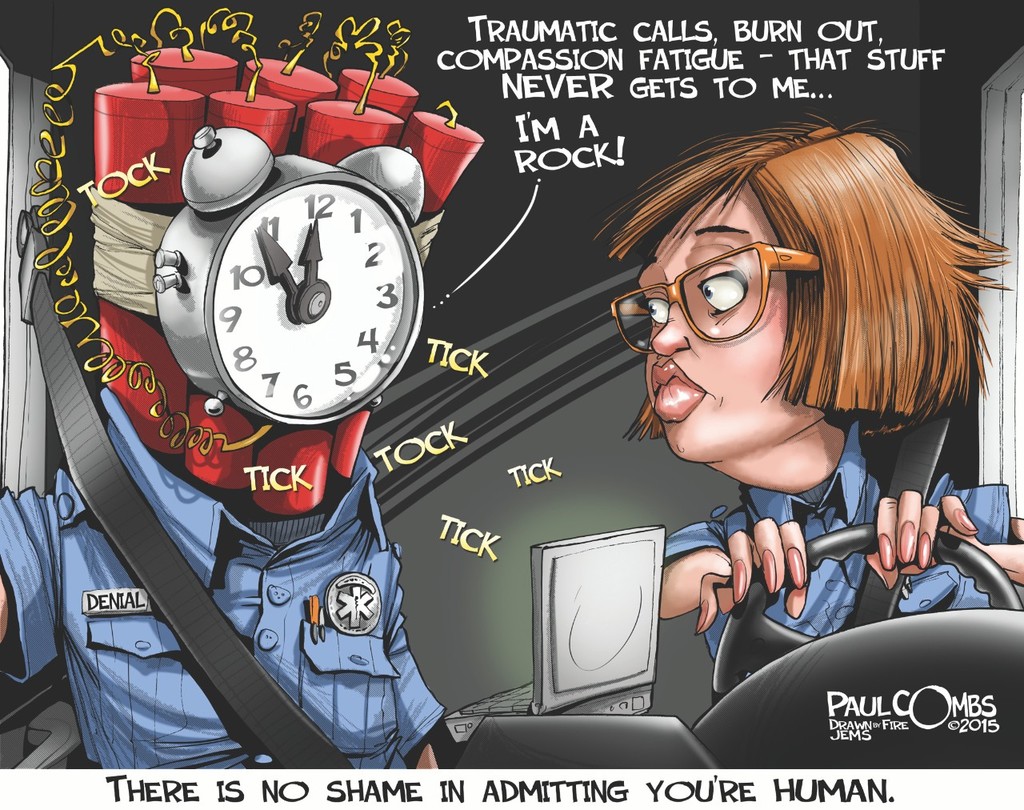 If you are suicidal yourself, first, recognize that there is no shame in what you are going through.  You are not a weak person for feeling suicidal - in fact, no feeling can make you a weak person.  Suicide and depression have a way of closing us off, making us feel like we are in a dark bubble with no way out.  The present looks bleak and the future looks grim, and it seems like there is no way out.  You must realize that this is just your illness talking.  It isn’t true, and at some point, in the future you will realize that it was never true.  It might seem inconceivable now, but one day you will see the high beauty in life.  Don’t leave the ones who love you behind to wonder what they could have done.  Start today by reaching out to somebody you trust.  You can always contact the National Suicide Prevention Lifeline at 1-800-273-8255.

There are many good resources regarding suicide online, most started by firefighters out of concern for their compatriots.

https://www.everyonegoeshome.com/ is focused on providing educational resources on hazard mitigation (including suicide) so that “Everyone Goes Home”. http://www.ffbha.org/what-are-these-numbers/ What Are These Numbers?

http://www.helpguide.org/articles/suicide-prevention/suicide-preven... Suicide Prevention: How to Help Someone Who is Suicidal and Save a Life