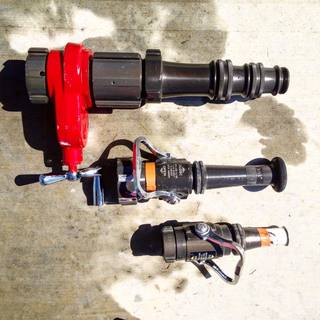 Before we go big guns blazing we can review our first due fire attack options. The 1 ¾” flowing 2.5 gallons per second is a rapidly deployed and highly mobile attack line for a room or rooms of fire. The 2 ½” attack line flowing 5 gallons per second is our heavy weight fighter looking for the big knockdown against the big opponent of a full residential floor on fire, commercial occupancy fire or any of the ADULTS situations. Finally we have the deck gun for those marginal situations where you arrive to find up to an  entire building on fire and the rapid application of your whole or partial tank at 10 gallons per second is required to nuke the fire's progress and prevent extension to exposure occupancies.

In these master stream situations it is my personal opinion they should be a smooth bore. These streams will be exterior where they will be influenced by wind, large bodies of fire will require greater stream penetration and set backs or positioning challenges for the engine mounted stream push us to maximize our stream reach and accuracy.

When a smooth bore of these diameters are used as master streams the operating pressure is typically 80psi. Most of the times when engines are set up with stacked tips I find that a full 4 tip or "quad stack" is in place with the 1 3/8” on top. The two main reasons for this are "because they came that way" or because the engine has a 500 gallon tank and to use a 500 GPM tip would give nearly a minute of operation before a supply is needed.

I personally recommend the 1 ½” tip as the first up for the first due deck gun. Having tried this on a variety of different engines I have found this 10 gallon per second stream to be the highest volume, best quality stream that can be delivered strictly from tank supply. As you begin to move to the 1 ¾” and 2” tips a lot is being asked of the unsupported pump and internal plumbing and the larger tip size also reduces the stream reach and pin point accuracy that you find in the 1 ½” tip. 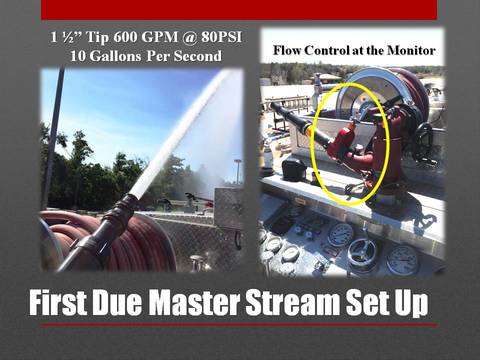 The appropriate tip is the first part of the first due deck gun set up, flow control at the monitor is second. Having a valve at the tips and more specifically a gate valve has several benefits. Flow control at the monitor reduces the potential for wasting water during positioning.  It allows you to open the master stream valve at the panel and charge up to the monitor valve at idle then throttle up. Anyone who has attempted to open that larger, less frequently used valve under pressure can appreciate this. It also sets the stage for a single person to serve as both pump and master stream operator.

In lightly staffed/volunteer organizations with 1 or 2 man engines this is important but also in fully staffed engine companies the efficiency of the pump operator making a quick knock down while the other members are making a stretch. 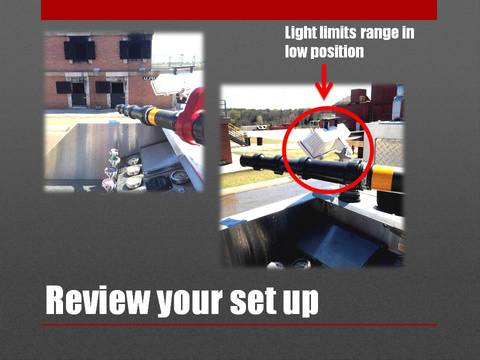 Utilizing a gate valve in this set up over a ball valve reduces the overall length of the set-up and due to the design of the gate versus the ball valve it eliminates the potential of a water hammer due to rapid valve closure.

Once the deck gun itself is set up with tips and a valve be sure to operate in all potential positions. It is important that any obstructions or limitations are identified prior to the fire. The devil is in the details here as even the location of a light can now dictate how you position the apparatus to use the tool in a specific situation. The final step in the set-up process is predetermining our pump discharge pressure (PDP) for this operation and it can only be done by flowing water. The PDP can be rig specific, even the slightest differences in plumbing, valves and or location can swing the friction loss by 20 PSI at this volume. Once you are flowing at the appropriate PDP close the gate valve at the deck gun and record your static pressure.For this engine we found that the static pressure was 140 to achieve the 80 PSI at the deck gun gauge once the valve was fully opened . This was not confirmed by a flow meter which would be the optimal way to pre-plan, however it will serve as an example.

By having flow control at the deck gun and knowing the static pressure the pump operator can quickly engage the pump upon arrival, pull the tank to pump valve, open the master stream valve and throttle up to that 140 PSI static pressure. This ensures that when the firefighter manning the deck gun or the pump operator jumps up to operate it they will know that the appropriate pressure is being supplied immediately upon opening the gate valve.

The hard work is done in the set-up, the operation is as simple as Ready, Aim and Fire. 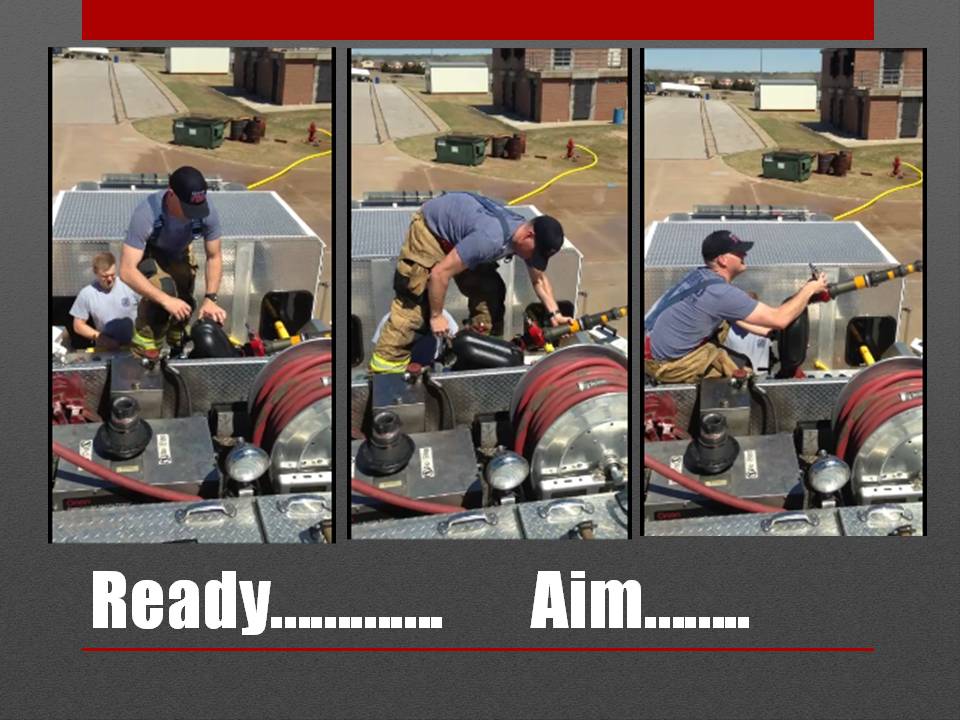 Ready is getting the pump set up, master stream panel valve opened and throttling up to the required static pressure.

Aim is setting up the deck gun in the appropriate position for the target if the one on your engine has a high and low set up. Then sighting in the tips for the target. Fire is opening the gate valve and delivering that high quality, fire killing, H2O at 10 gallons per second to the involved occupancy.

You will not get a marksman merit badge your first time out. Learning the reach and arch of the stream, and the mechanisms to adjust the monitor take some repetitions but it pays huge dividends. If we are choosing to go big at 10 gallons per second from our tank upon arrival in an attempt to take control of a rapidly changing situation we cannot afford to waste 10 to 20 seconds of water getting our pressures or our aim right. Getting good at going big with the first due deck gun happens in training. 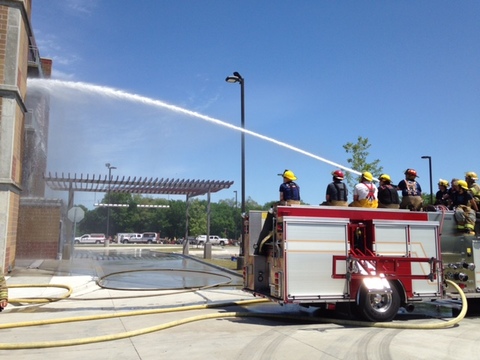 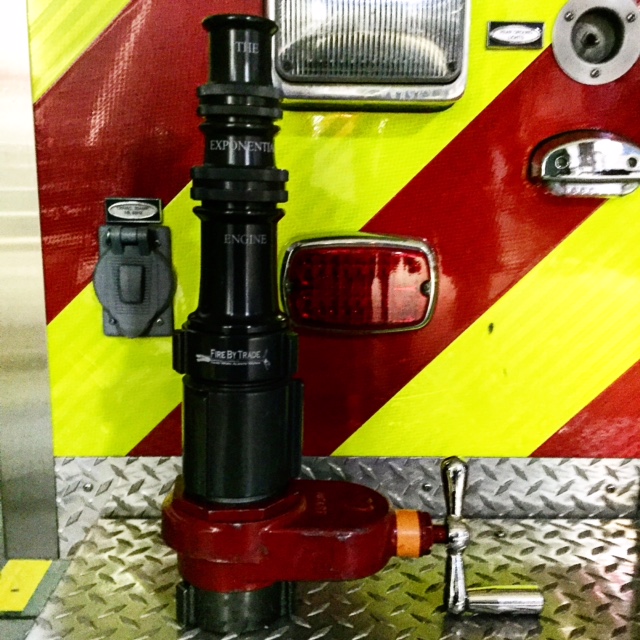 Here is a fire my Department had a couple of years ago. The engine laid in and knocked fire down with deck gun. While that was happening the interior attack line got as close as they could. As soon as master stream was shut down they moved in to knock remaining fire down.