It's the Small Things

I was listening to a recording of firefighters explaining how they feel like there is sometime not enough recognition being spread among the ranks. They were explaining how things like a simple hand shake and a job well done can go a long way. I agree with them 100%. This is something we all need to keep in mind. I feel like I don’t thank my guys enough for the work that they do. Award ceremonies and public recognition are all great ways to recognize people. I have noticed during my experience in the military and the fire department, it the small things that matter most.

There are many different ways people feel valued and a part of something. Some like to see it in their paychecks while others like those small things. Things such as station patches and coins, or wearing their company numbers on their hats. These are all ways that people feel a sense of pride and belonging to a unit and an organization. They may seem small in the grand scheme of things but items such as these foster pride, commitment, and teamwork.

I get the concept of uniformity and understand that things can go a bit out of control when there is not a little bit of control on station shirts, patches etc. This can be easily curbed with still allowing them in the firehouses. There can still be a pattern of uniformity. All people want to be a part of something. Let them be part of something and the performance you get in return just may surprise you, all because of a 5 dollar patch and a 20 dollar t-shirt. You will see the fruits of that investment. 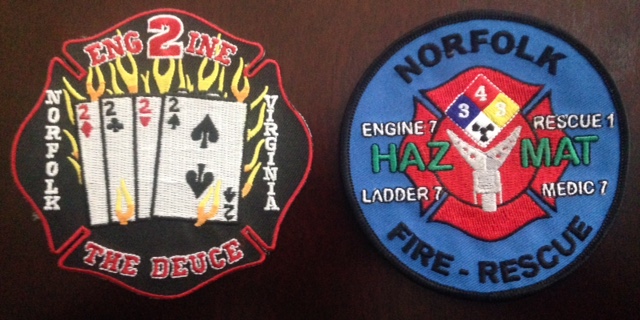 It is no secret that any organization is best run and remains running efficiently if it's people feel valued. There is nothing better to firefighters than their company officers, senior officers, and executive staff reaching out to them occasionally and giving thanks, shaking their hand, and telling them good job. Those two words can go a long way, and for some people, that simple gesture will mean more to them than all the pomp and circumstance of a formal ceremony.

When I was in the Navy, the Executive Officer of the command would always be out of his office and walking around the ship. He would stop and talk to all the junior sailors and have conversations with them about any random thing. He took time out of his busy schedule to ensure he was getting face time with his sailors. Not just to check a box, but because he truly cared about his crew and wanted them to feel like they were valued and a part of something. I think when  a Fire Chief or other executive staff member that takes the time to get out into the stations, have a cup of coffee with the men and women in the firehouses, is making an impact. Also, when going out into the stations, really engage in conversation. Talk to the men and women about the fires they have been to recently, interesting medical calls and any other exciting things. Sit with the FIREFIGHTERS at the galley tables and not the officers. It’s the firefighters who deserve the conversation and recognition.  This is just another small thing that matters. I think it is safe to assume just about everyone of us has some sort of promotional process. People spend six months to a year preparing, studying, and cancelling other events, just so they can have a shot at finishing well. They dedicate a number of hours to place themselves in a position to be a leader and influence others around them. Let’s make it meaningful when that promotion comes around. Anyone can hop on a phone and say congrats you got the job. Do like the Fire Chief pictured below is doing: Get out of the office and go shake their hand, and give them their badge and helmet. How are we supposed to send a message of just how important it is for that person to step into a leadership position, if we do such an informal job of passing the good news? Make it a big deal, because it is! There are plenty more examples of those little things that go a long way. We need to stay grounded and not forget about the ones that make our organizations tick. The minute we become disconnected from them and what drives their passion and performance, we become weaker.