Lessons from the Fireground: Houston FD LODD May 31, 2013 Lessons from the Fireground
Houston FD LODD May 31, 2013

The two fire fighters were assigned to Engine 68 (E68). Upon arrival, the captain of E51 (E51A) radioed his size-up stating they had a working fire in the restaurant with heavy smoke showing plus a temperature reading from his thermal imager. E51 made an offensive attack from Side Alpha with a 2½ inch pre-connect hoseline in the restaurant. District Chief 68 (D68) arrived on scene and established “Command”.

He ordered E51 out of the building because the engine operator of E51 (E51D) advised that E51 was down to a quarter tank of water. Engine 68 had arrived on scene and had laid two 4-inch supply lines from E51 to a hydrant east of the fire building on the feeder road. Once E51 had an established water supply, E51’s crew re-entered the building. Engine 68 (E68) was ordered to back-up E51 on the 2½ inch hoseline. Engine 82 (E82) (4th due engine company) was pulling a 1¾ inch hoseline to the front doorway that E51 had entered, when the collapse occurred.

The roof collapsed 12 minutes after E51 had arrived on-scene and 15 minutes and 29 seconds after the initial dispatch. The fire fighter from E51 (E51C) was at the front doorway and was pushed out of the building by the collapse. The captain from E82 called a “Mayday” and Rapid Intervention Team (RIT) operations were initiated by Engine 60. During the RIT operations, a secondary wall collapse occurred injuring several members of the rescue group.

Key Recommendations
•Based upon fire department procedures, the strategy and tactics for an occupancy should be defined by the organization for fire-fighting operations. The Incident Commander should ensure that the strategy and tactics match the conditions encountered during initial operations and throughout the incident
•Fire departments should review and update standard operating procedures on wind-driven fires which are incorporated into fireground tactics
•Fire departments should integrate current fire behavior research findings developed by the National Institute of Standards and Technology (NIST) and Underwriter’s Laboratories (U.L.) into operational procedures by developing standard operating procedures, conducting live fire training, and revising fireground tactics

We will be posting an in-depth multi-part series on Houston: Anatomy of a Collapse with building construction insights on PennWell's FireEMS Blog on FiregroundLeadership.com and Buildingsonfire.com 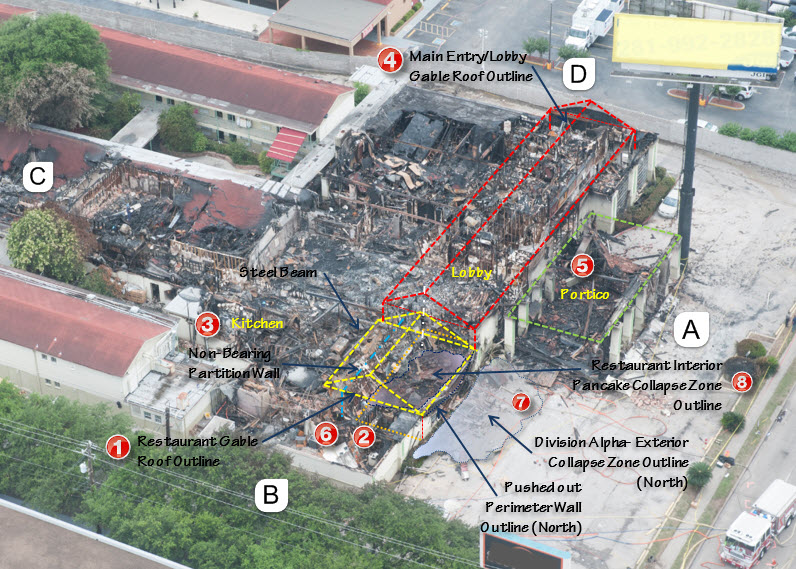