On Monday, January 19, 2015, a fire occurred at a residential dwelling located at 936 Childs Point Road, Annapolis, Anne Arundel County, Maryland 21401.  The two-story occupied single family dwelling was approximately 16,386 square feet in size and sustained a complete loss to the structure and contents. The damage was estimated to be approximately $16 million to $18 million.

There was a monitored automatic fire alarm system which provided the initial notification to emergency 911. The first units arriving on the scene received conflicting reports about the status of the occupants of the dwelling; some reports indicating that they were home, and others suggesting they were out of town.

It was later determined that the two adult home owners and their four grandchildren (ranging in ages 6 to 9 years old) were unaccounted for. A multi-agency investigation led by the Bureau of Alcohol, Tobacco, Firearms & Explosives (ATF) and the Anne Arundel County Fire Department (AAFD) ultimately concluded that all six individuals died as a result of the fire.

The ATF recently published the findings of their investigation that shed light on the circumstances of the fire, the postulated fire dynamics and extension and the performance of the large square foot residential structure (mega-mansion) that contributed to the death of the occupants.

The Building and Occupancy

This structure was located on approximately 8 acres and was situated on the dead-end of a peninsula. The location was accessed via a narrow private road to a columned and gated entrance. The driveway continued to the house and then past the house on the north side until it ended in a circle at the boat house near the water’s edge. The topography of the location has the house sitting on approximately the highest point of the property. The entranceways were largely on grade or a foot or so above grade and the structure looked out over the water on the south side. For purposes of the ATF report, investigators divided the main residence into three wings: the north wing, the main wing, and the east wing.

The residents purchased the property with an existing house on it, which they razed, and constructed the present house in 2005. The house is reported to be 16,000 square feet in size.

The house was a mix of construction types but overall it was largely two stories with one section that was three stories. The Great Room was a high ceiling one-story room and a basement or crawl space ran under the majority of the house. This structure was built in the Tudor-style and reportedly was referred to locally as “The Castle” for its construction and appearance. The majority of the front of the main house was covered on the exterior with an approximately 6″ thick, greyish colored, stone façade, the roof was covered with slate, there were multiple turrets, three tall stone covered fireplace chimneys and a shorter chimney for the guest house. The exterior of the remainder of the structure was a mix of largely stone façade and stucco. The house was built in essentially a circle around an open paver stone covered parking court that had two vehicular entrances. The main entrance was via a stone columned opening with stucco covered walls between the main house on the right and the guest house on the left. The second entrance to the courtyard was via an arcade or covered breezeway that connected the guest house to the main house and was between the parking court and the previously mentioned entrance road that continued by the house proper. Link to FiregroundLeadership.com for the remainder of this comprehensive post on the building's construction features and expanded insights on Mega-Mansion Firefighting Operations for discussion Points. 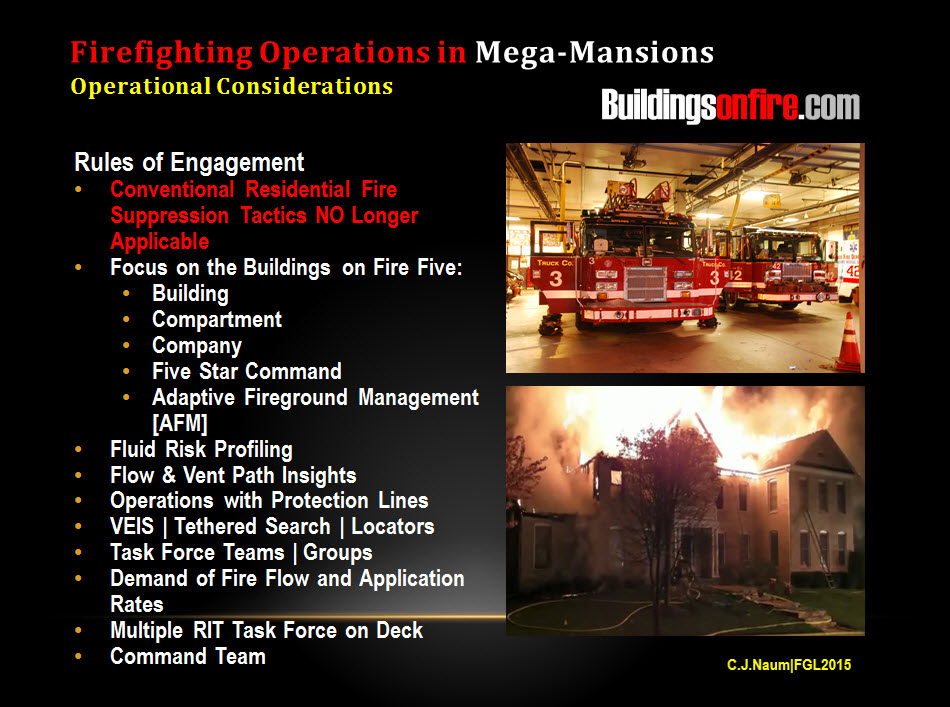