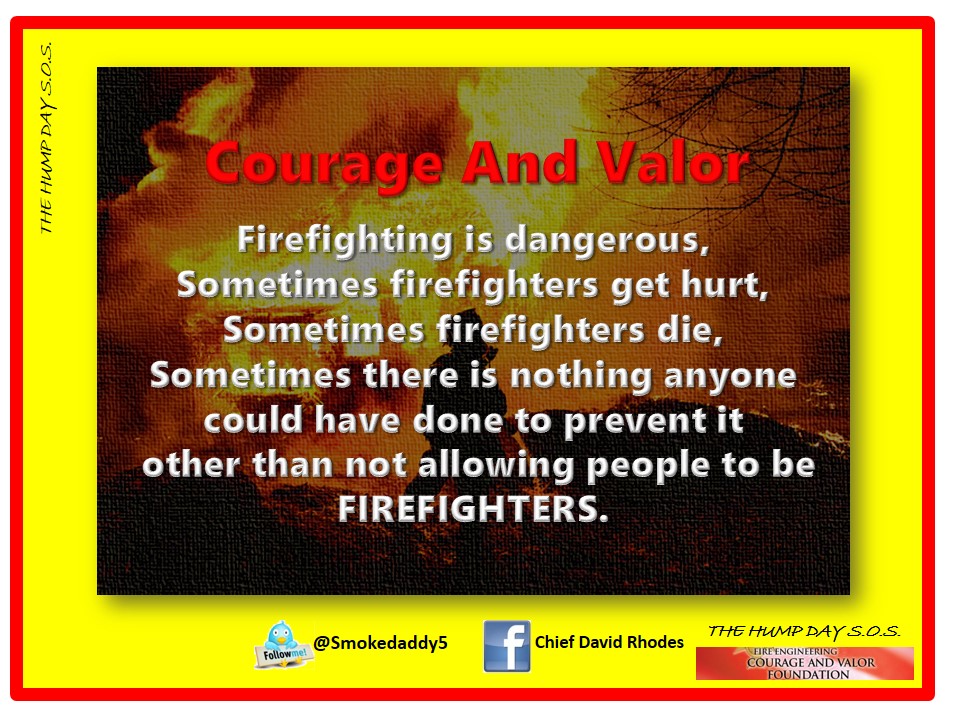 This Hump Day SOS is in honor of Lieutenant Gregory Pickard who posthumously received the Ray Downey Courage and Valor Award today at the Fire Department Instructors Conference.

Courage and Valor are traits are not learned through training. They are not automatically bestowed upon you if you are fortunate enough to wear a uniform and represent the great brotherhood of firefighting. True Courage and Valor emerge in moments when one’s personal experiences, beliefs, values and character merge in a single moment of action. It is often said that a person’s true character does not emerge until they are placed in an adverse situation. Over the past decade the fire service has aggressively launched efforts to prevent line of duty deaths and injury. The numbers show that these efforts have had an impact. Everyone involved in these efforts should be proud of that fact. There are some however that present a position that all line of duty deaths can be prevented and therefore minimize the value of those who perform heroic acts of self-sacrifice. As long as firefighters are in existence and continue to be the ones that place themselves in situations that reduce or eliminate risk to other human beings, there will be line of duty deaths. We all have to work hard and make decisions that keep our firefighters and ourselves from repeating mistakes that end in tragedy. But we cannot take shelter in a “no action” fire service that is always playing a prevent defense. Acts of Courage and Valor continue to save the lives of citizens and firefighters each year. We are in the business of buying people another birthday, giving a kid a chance to grow up, giving a dad a chance to walk his daughter down the aisle, giving a mom the chance to see her son graduate and giving our brothers everything in an attempt to survive. In order to accomplish this mission some individuals make a choice to give up all of those things for themselves. Courage and Valor is what ALL firefighters should be made of.

“When the flashover occurred, Engine 2 was inside continuing firefighting efforts in an adjacent area of the building. The Engine 2 officer came back to the bingo area, where he witnessed the crew of Engine 5 with Lt. Wallace in the room and fully engulfed by fire. Even though they were engulfed in the flashover and their protective clothing and equipment was burning, the crew of Engine 5 never relented in their efforts to continue dragging Lt. Wallace out of the building. When they were within approximately 10 feet of the exit, they collapsed from the burn injuries they sustained and were removed by other firefighters. All of Engine 5's crew, as well as Lt. Wallace, were severely burned during the flashover.”