Interior vs. Exterior, Combat, and other stuff.

Not to be overly dramatic, but to me, fire attack is combat.  Not much different than any other type of fight.  My intention is to present an overwhelming force that ends the fight quickly and in my favor.  This isn’t to be confused with fighting sports.  In the sporting environment, it’s often my turn, your turn, then my turn, and so on.  As my favorite defensive instructor says, “In a real fight, it’s my turn, my turn and my turn.”  The enemy never gets a chance beyond the ambush!  Also,…

I recently had the honor of speaking to the NFPA Forum in Indianapolis.  The NFPA Forum is made up of three representatives from all of the major fire service organizations for the purpose of solving complex issues and moving the fire service forward.  It really is an powerful group with an awesome purpose! I sat in the morning session to listen in while I waited for my turn at the podium.

The morning session focused on cancer presumption in the fire service.  I expect my knowledge…

Social Media Blogs are Like Opinions: Everybody’s Got One!

There is plenty of change going on the world these days, and the fire service is no different.  We are looking into the science of our business and debating how to apply it, wrestling with generational issues, technology, etc., but one of the most striking changes to come along in the last ten years or so has been the way we get our information.  And it is important to recognize these changes and how they influence our industry.  Our younger members may not have the experience to recognize…

Here's a press release from the ISFSI on their Principles of Modern Fire Attack Program.  It includes some tactical clarifications that might help some out.

Lot's of discussion/conflict on the SLICE-RS concept, which I think is great. Conflict/discussion is a necessary indicator of change. Without it, everything remains the same. Although, some of the who-ha is inaccurate. Not picking on this guy. It just happens to be the example of the day. A few facts that might be helpful:

1) Rescue remains the highest priority of the fire department. We're every bit as aggressive on rescue as ever; I'd argue more aggressive and more e…

I’ve been pondering search lately.  We have learned that the best chance for survival for civilians trapped in a burning structure (and firefighters in trouble too) is get a closed door between them and the fire area.  This will greatly reduce the thermal threat, and improve their chances of finding breathable oxygen.  Remember, if the fire is vent-limited, so are you, if you are in the same space without an SCBA.  So, we need to consider adding the “sleep with the door closed” message…

So we continue to tweak and hone in our application of the lessons from the latest fire dynamic research.  One of the issues that continues to be "sticky" is the management of flow path.  While at FDIC 2014, I had the honor to meet Dr. Michael Reick from Germany.  He created a device that has been in use in Germany for over 10 years with reported great success.  In fact, they have more than 14,000 units in service and have documented more than 1,200 successful deployments on working… 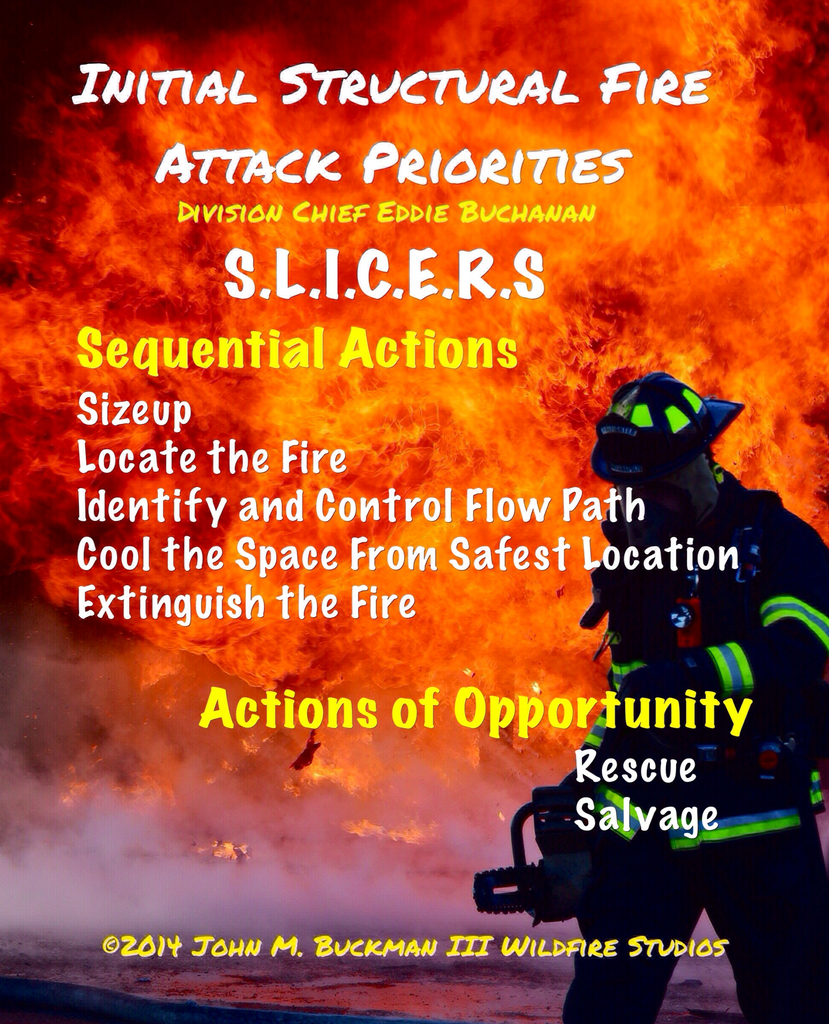 I recently sat in on a brief on the new Near Miss Reporting System.  I’ve always been a strong advocate of the Near Miss System since its inception and have used it many times when preparing to teach various topics.  It has a strong history of collecting and providing valuable information to the fire service.  And I’m glad to report that the new reporting system is better, stronger and faster than ever before.  But something struck me during the presentation on the new near-miss…

The Sunday after FDIC!

I usually take a few minutes on Sunday to get a strategic look at things.  I evaluate the work of the previous week and look at priorities, goals and challenges for the week ahead.  The Sunday after FDIC is a whopper!  So much happens in a compressed time, and I don’t want to miss or lose any of the great opportunities that I was lucky enough to be exposed to or experience.  Here’s a few of the highlights from my week at FDIC:

There is no civil…

By now it’s no secret that the fire service has accumulated a considerable “body of knowledge” as a result of the fire dynamic research from NIST and UL.  And now we’re into the “what are we going to do about it,” phase of evolution.  We are starting to see examples of departments implementing tactical changes based on the research, including my own department, developing its SLICERS concept.  And while we’re making good progress in bringing the research lessons to the fire ground,…

Old guys like me are occasionally asked what we consider to be the highlight of our career.  I always thought standing on the “big stage,” at FDIC represented the pinacle of achievement in our business.  It’s where I’ve seen all of my fire service heroes stand and talk on the latest in firefighting and what is coming next.  I had the honor some years ago to stand there.  I couldn’t believe that they let me anywhere near that podium, but I was honored to have the chance to do it.  But as it…

What a great FDIC! Hats off to Bobby Halton and Diane Feldman, and all of the Fire Engineering team for pulling off another great show. We were pleased to have the George D. Post, Instructor of the Year Award on the main stage again! Dan Madryzkowski from NIST took this year's award. What a great guy! You can watch the award on the video coverage for FDIC on Fire Engineering.com.

This week's edition of the VOICE features Tom Harrington from the DHS Grant Office. Tom oversees the… Continue