From Firefighter to Fire Chief: Hard Truths Everyone Needs to Know

I hope what you’re about to read upsets you.

You see, there’s a serious problem in the fire service when it comes to health and wellness.  No one can deny the fact that for decades upon decades, our number one killer has been our own poor health.  The problem is, it’s an intellectual agreement for many.  In other words, while many support firefighter health and wellness in fundamental terms, far fewer are doing anything about it.  And, as improbable as it may seem, there are even some out there that still try to deny or minimize the issue.

Let me give you some more information that should raise your eyebrows.  It is what we know – either as a result of reliable statistics, formal clinical studies, or both:

Finally, indulge me as I provide some scientific facts that you may not know or understand.  I’ll put them in firefighter-speak later:

What Does it all Mean?

In a nutshell, a decrease in plasma volume and increase in platelet count increase your vulnerability to SCE.  It means that at the time you need the most performance from your heart and circulatory system – when your heart needs an increased oxygen level to operate efficiently (firefighting activities), your blood vessels are stiffening and your blood is becoming more viscous (thicker).  It means that arterial plaque is at a greater risk of rupture, which causes clot formation, which leads to sudden heart attack.

The science does not lie.

So, while we can all agree that even more research is needed to understand how the firefighting environment affects our bodies, there is more than enough proof right now to start doing something about it.

I ask all of you, from the firefighter to the fire chief, where do you stand?

Now that you’ve digested some well-known statistics as well as some very eye-opening scientific data, consider that participation in a regular fitness program will: What else can you do?

Beyond exercise, there are many other interventions that will help you to reduce your cardiac risk profile: 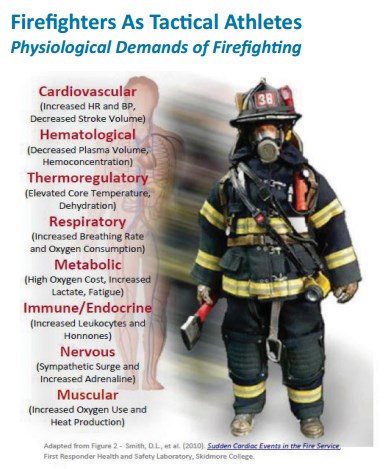 During November and December of 2015, I was honored to be invited to participate in two very important events sponsored by the National Fallen Firefighter Foundation (NFFF):  The 2015 Fire Service Research Agenda Symposium, and Heart to Heart: Strategizing an Evidence-based Approach to Reduce Cardiac Disease and Death in the Fire Service.  I recently returned to assist in development of a messaging campaign designed to reach as many fireighters as possible.  Sadly, as of this update, the 2016 Needs Assessment conducted by teh NFPA indicates that only 27% of fire departments in America have even a basic health and wellness program in place.

I can say without fear of contradiction that the researchers, scientists, and fire service advocates from organizations across the country at these events continue to work tirelessly on your behalf, in the name of reducing cardiac-related LODDs. While there is still research to conduct and data to analyze, while we still need to develop and deliver the appropriate messages and create impactful interventions, there is already enough overwhelming scientific and statistical evidence to prove that action is needed now.  We simply must do everything we can to address the modifiable risk factors that increase our chances of suffering a cardiac event.

As the chart above demonstrates, the hard truth is, SCEs are what kill us the most.  From individual firefighters to fire chiefs, from grass-roots and regional efforts to national initiatives, we must move beyond agreement on an intellectual level that our health problems are our own worst enemy: We must take definitive action.

Starting today, what are you going to do about it?

The Director of The First Twenty’s Firefighter Functional Training Advisory Panel, he also works closely with the IAFC, NFFF, and NVFC on strategies to improve fitness and reduce health-related LODDs in the fire service.  He is a frequent contributor to Fire Engineering Magazine and Firefighter Toolbox.

He was the 2014 recipient of the IAFC-VCOS Emerging Leader Scholarship sponsored by Dr. Richard Gasaway.

Jahnke, S. A. (2015). State of the science: How health behaviors contribute to LODDs [PowerPoint slides].