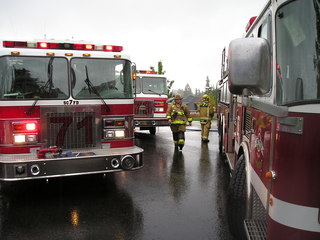 At 11:05 pst, Snohomish County F.D. #7 was dispatched to a residential fire in the Fernwood area of Fire District #7 just blocks from Station 72's quarters. Ladder co. 72 arrived to find a large 2 story single family, charged with heavy smoke and flames out the C side kitchen window on the first floor. Ladder co. 72, led by Lt. Fisher, forced the front door with a set of irons and had heavy brown smoke down to the floor. Leaving the truckman to control the door for the first arriving engine co., Lt. Fisher went to the C side and prepared to vent the rear window and adjacent slider as the nozzle crossed the threshold of the front door. Battalion 71 arrived and established "35th Command". 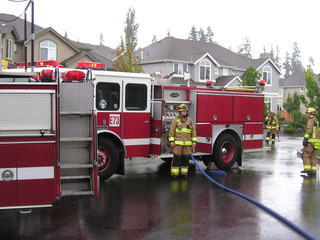 Engine co. 73 (I as the acting Lt.) arrived and became the attack engine. 73's nozzleman stretched a 1.75" to the front door and we began to push in with zero visibility. At this time, the rear window was vented and we opened up our line into the kitchen, rec. room, and dining room areas. Engine 76 arrived and stretched a back up line as Ladder 72 began their primary search of the second floor. Engine 71 established the water supply to Engine 73 and Ladder 72's D/O, B. Ekse, threw a 28', a 24', and a 16' ladder to the second story windows as second means of egress as the Lt. of Engine 71 threw thier 28' ladder. Engine co. 74 was established as the RIT Team and set up on the "A" side of the structure. Knockdown was reported by Engine 73, and L72 reported "nothing found" on completion of the primary search. 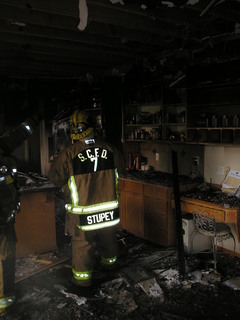 Additional overhaul was completed by Ladder 72, Engine 73, and Engine 76.

Investigators onscene reported the fire as "suspiscious" after investigating, and are sending char samples to the lab for flammable liguids testing.

The house was unoccupied at the time and no brothers were hurt while operating at the scene.

Comment by Jeff Thompson on August 28, 2008 at 11:03am
We are no longer friends! WTF! That damn thing was probably burning while we were on shift that morning, just waiting for us to get off duty! What does it take to get a fire on D-Shift these days?