The frustrated members of many fire departments, can often be seen gathering in small groups of like-minded people, discussing why they can’t make any improvements or solve the many problems they see, why their department can’t be progressive, and why their particular organization will never be what they want it to be. They constantly see great ideas in the fire service, best practices that other departments are initiating, leadership in other departments that are fostering trust, transparency, and the value of mission and service, and they ask, “Why not here?”. In the end, they resolve to boil the root cause of all of their department’s woes down to the fact that their organization is dysfunctional, and its culture is broken. It’s a cultural thing, and it takes years to change a culture, so, no one tries. It’s an immovable object, and we have yet to find the irresistible force to change it. Well, as Col. Potter used to say on M.A.S.H…. “HORSE HOCKEY!”.

Your organization’s culture, large or small, is exactly what you make of it. The authors of the book, “The Practice of Adaptive Leadership” touch on this very subject with a perspective that changed my view of organizational culture. They introduce the concept of the illusion of the broken system. They propose that the broken system or dysfunctional organization that we perceive as being the immovable object out of anyone’s control to change is nothing but an illusion. They state, “The reality is that any organization is the way it is because the people in that system want it that way. There is no such thing as a dysfunctional organization, because every organization is perfectly aligned to achieve the results it currently gets. Enough people like the situation exactly as it is, whatever they may say about it, or it would not be the way it is” (Heifetz, Grashow, & Linsky, 2009). Go back and read those few sentences again, and let it sink in for a minute. They’re right, aren’t they? The bottom line is, no matter what rank you are, or where you are in the organization, whatever you are not changing, you are choosing to accept, so quit complaining about it and do something. Easier said than done, especially if you are not the fire chief, right? Well, you’re right, it’s not going to be easy, it’s going to take a lot of work, and it’s not going to be very popular, especially at first, even if you are the fire chief.

Firefighters hate two things, change and the way things are right now. Changing the culture isn’t easy, because people don’t want the culture to change. Change represents fear of what they could lose, which may be the power of seniority, the respect or perception of being a “good firefighter” if that definition changes or if people find out what they don’t know. They may fear losing the ease of not being held accountable to a standard, or not having to train, or not dealing with the hassle of holding other people accountable, or whatever it is that they currently like about how things are. Closing the gap between where the organization currently is, and where it should be would be more painful to many people than simply living with the way things are now. Change symbolizes loss to many people. It makes it even more difficult when the folks at the top of the organizational chart are just fine with the way things are now, and see change as something to be avoided. So, yes…it’s not going to be easy, but if you don’t like the way things are, do something to change it. Change can start with one person, no matter where you are in the organization. The authors of “The Practice of Adaptive Leadership” emphasize however, that the path forward is not through forcing change down everyone’s throat. They state, “When you realize that what you see as dysfunctional works for others in the system, you begin focusing on how to mobilize and sustain people through the period of risk that often comes with change, rather than trying to convince them of the rightness of your cause” (Heifetz, Grashow, & Linsky, 2009). 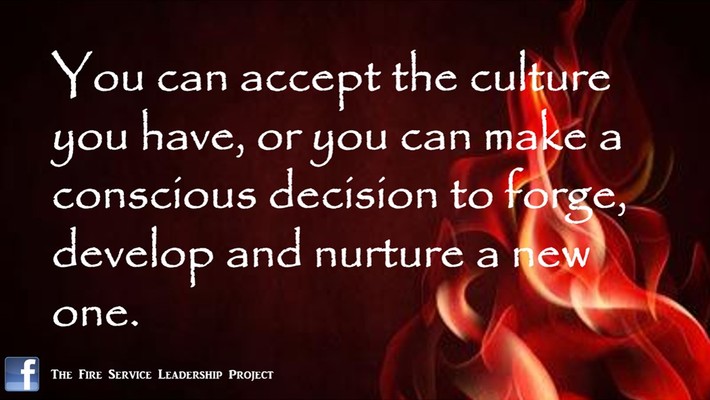 Firefighters: Whether you are a rookie or a senior firefighter, you have influence and you can be a leader. If you feel like you are the only one who seeks a change for the better, set the example from wherever you are in every action you take and word you speak. If you have a vision of what you want the organization to become, work towards that vision in your everyday individual position. Become as an individual, what you would like to see in the organization as a whole. Find allies and support them. You may think you are alone, but once you start talking and acting a certain way, once you start forging that path individually, others will find you. Others will ask you why you are doing something a certain way, or where you learned a certain skill. These are your people. Become the change you wish to see, and they will seek you out. Your numbers may be small, but every other person you find who is of the same mindset will double the efforts you were previously making alone. Find and attend training classes and conferences with these people. Find a way to teach what you know. Mentor the new firefighter, teach an in-station class to others, even if only a few are interested. Preach about your vision for the organization every chance you get to others in your station, in your battalion, in your department. Get organized and get involved. Join department committees, offer to conduct battalion or department wide training on something you think the organization can get better at, and is in line with where your vision is for the department. Make proposals up the chain of command. Whether they are supported or not, come to fruition or not, you are spreading the word, and getting others higher up to think about your ideas and vision. You also can’t care about who gets credit. If someone else can get your ideas or proposals some traction, support it and them. Remember, the vision and mission come first. Don’t get frustrated. Realize this is not a short battle, but rather it is a campaign. Keep pushing forward.

Company and Chief Officers: Make changes within your company, your station, your battalion or district. Set the expectations and standards for your piece of the organization that will get at least that part of the department moving in the right direction. Hold people accountable to those expectations. Mentor your folks, train them, remind them why you and the department are here, and find those firefighters I described above, and support them! As a company officer you may have influence over a single crew, or as a station officer multiple crews or shifts. As a Battalion or District Chief, you may have influence over multiple stations. As a Deputy or Assistant Chief, you may have influence over an entire shift of the department. Promoting to a higher rank simply means you have more responsibility to do the right thing, and gives you more influence over a larger piece of the organization. Whatever vision and culture you would like to see for the entire department, create within your crew, your station or your battalion/district, or your shift. Find allies in other company or chief officers and work together to spread the word, and set the example in everything you do and say. Transfer to an administrative bureau or division, especially the Training Division, where you will have vast influence over an entire area of the department and you can develop and promote policies and procedures that will move the organization in a certain direction.

Fire Chief: As the top individual in the department, you have the ability to make sweeping changes, however, you are still only an individual. You can write any policy or procedure you want, but unless the people out in the street buy-in to it, and actually do it, it won’t matter. Change is still difficult, even at this level. However, the recipe for change remains the same. No one will believe in the change you are working towards, or what you are preaching, until they trust you. They won’t trust you until you set the example of where you want to go, and they know you are serious and invested. As the chief, you have the ability to set the tone, to identify and share your vision for the organization, to work with the members of the organization to identify the core values the department believes in, and then to reflect those values in every decision you make, and in how you hold others accountable to those values, and how you support and celebrate when others reflect those values in their decisions and behaviors. You have control of the ships rudder, but you aren’t going anywhere unless you can get others rowing together to move the organization forward.

Every organization has a culture. Often this culture may have developed by accident, and not by conscious effort. No matter your position or rank, seniority or lack of, you have only two choices. You can accept the culture you have, or you can make a conscious decision to forge, develop and nurture a new one. The only question now, is what are you prepared to do?

CHRIS LANGLOIS is a Battalion Chief with the Omaha (NE) Fire Department serving as the Chief of the Safety/Wellness Division. He is a 32 year veteran of the fire service serving in volunteer, combination and career fire departments in both Louisiana and Nebraska, the last 19 years with Omaha Fire. In Omaha he has served as a firefighter/paramedic, engine company Fire Captain, Training Officer, Chief of the Training Division, and now the Safety Division. He holds an Associate Degree in Fire Science, a Bachelor Degree in Public Fire Administration and a Masters Degree in Executive Fire Service Leadership from Grand Canyon University, as well as being a graduate of the Executive Fire Officer Program through the National Fire Academy and a designated Chief Fire Officer (CFO).