1) Pressure - Smoothbore nozzles are low pressure, they operate their rated flow at 50 psi. Why is this important in standpipe ops? Because standpipe systems are low pressure systems. They operate off of as little as 65 psi.  We will get more in depth on that next week.  Another reason, standpipe systems are notorious for failure and not providing the pressure that they should have.  This is partly due to poor maintenance and/or improper installation.

AND YOU SAY, BUT THEY MAKE LOW PRESSURE FOG NOZZLES!!!

2) Weight - The 2.5" smoothbore nozzle can weight as little as 2.5 pounds.  Fog nozzles can weigh in excess of 5 pounds and some weigh near 10 pounds. I’ve been called a liar before so I’ve attached a picture of a 2.5” fog off on of my cities apparatuses with a picture showing the weight from the manufacturer.  Granted, this is a play pipe style nozzle and I hope this is not what you are carrying on your standpipe packs.  You are fixing to climb 30 stories; I don't know about you but I want to shed as much weight as possible.

3) Debris - Face it. Standpipe systems aren't maintained like they should be.  Whether its sediment that has built up over the years or a skittles wrapper that a homeless person stuck down deep in the FDC, chances are you'll face some debris.  A smoothbore is capable of passing much debris.  A fog nozzle will not pass any.

4) Simplicity - The only moving part inside of your smoothbore is the ball valve. There are no baffles or springs.  This means there is a lot less chances for things to go wrong when you are pushing down a hallway 30 stories up.

A word for those that will argue they want the protection of the fog.

As we all know, a wide fog pattern WILL push fire. You can say its not pushing, but in essence if the fire can't come past the wall of fog you have made it will head in the path of least resistance which is the other way.  A wide fog pattern entrains air from behind you and moves it past the nozzle. Think about hydraulic ventilation. That’s how it works right?

If you are in a commercial center core high-rise building, the path of least resistance is around the core and possibly coming back behind you.  You could find your path of egress cut off.  Also, this may force fire into void spaces and provide extension both horizontally and vertically.

In the residential building, you are pushing the fire back down the hallway and into any apartment unit that has had a door left open as the occupants evacuated.  The best protection is always flowing the proper amount of water at the right pressure.

Also, I know a lot of departments run 1.75” for high rise operations.  They carry them in 100 ft and 150 ft flat loads and call them house packs.  Most of the time when the department uses this set up its for extending preconnects or connecting to a dead lay of 2.5” or 3” hose for a long stretch and they will have a fog nozzle on the end of it.  That’s a great set up and their territory requires it.  They still need to change the fog for a smoothbore.  I know it may not be what you are use too but placing a smoothbore on it will help two ways.  First, it’ll help keep PDP down on your long estate lay.  Second, it’ll set you up for success in high rise operations, especially since you are running 1.75” hose and the recommended size is 2” or 2.5” for high rise operations, depending on your buildings.

Hopefully you have found yourself convinced on the need to adopt a smoothbore nozzle for you standpipe operations.

Next week we will go over NFPA 14 which will lead us into discussions about hose size and nozzle tip size selection. 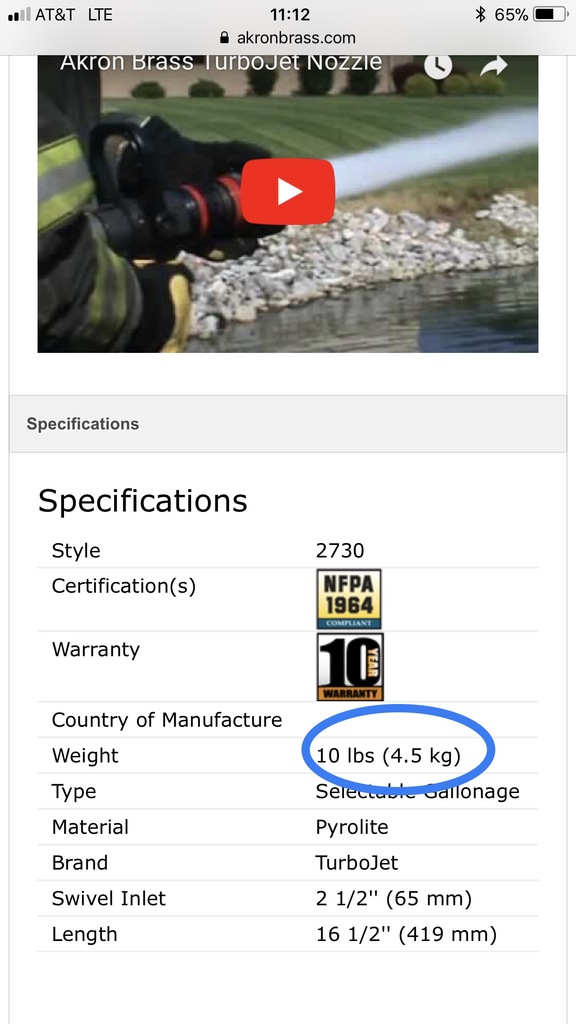 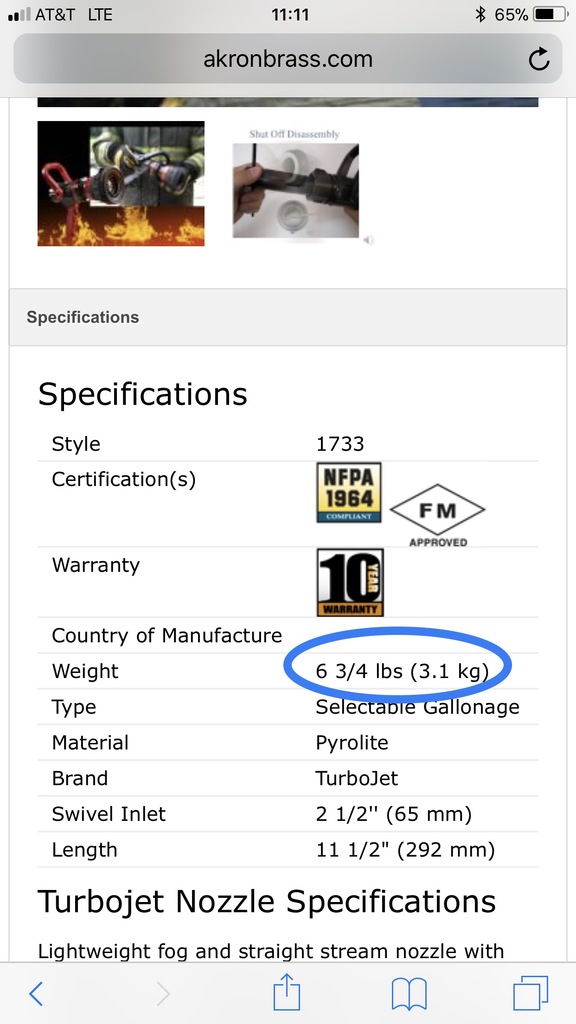 Above is the weight of a typical 2.5" fog nozzle, non play pipe style 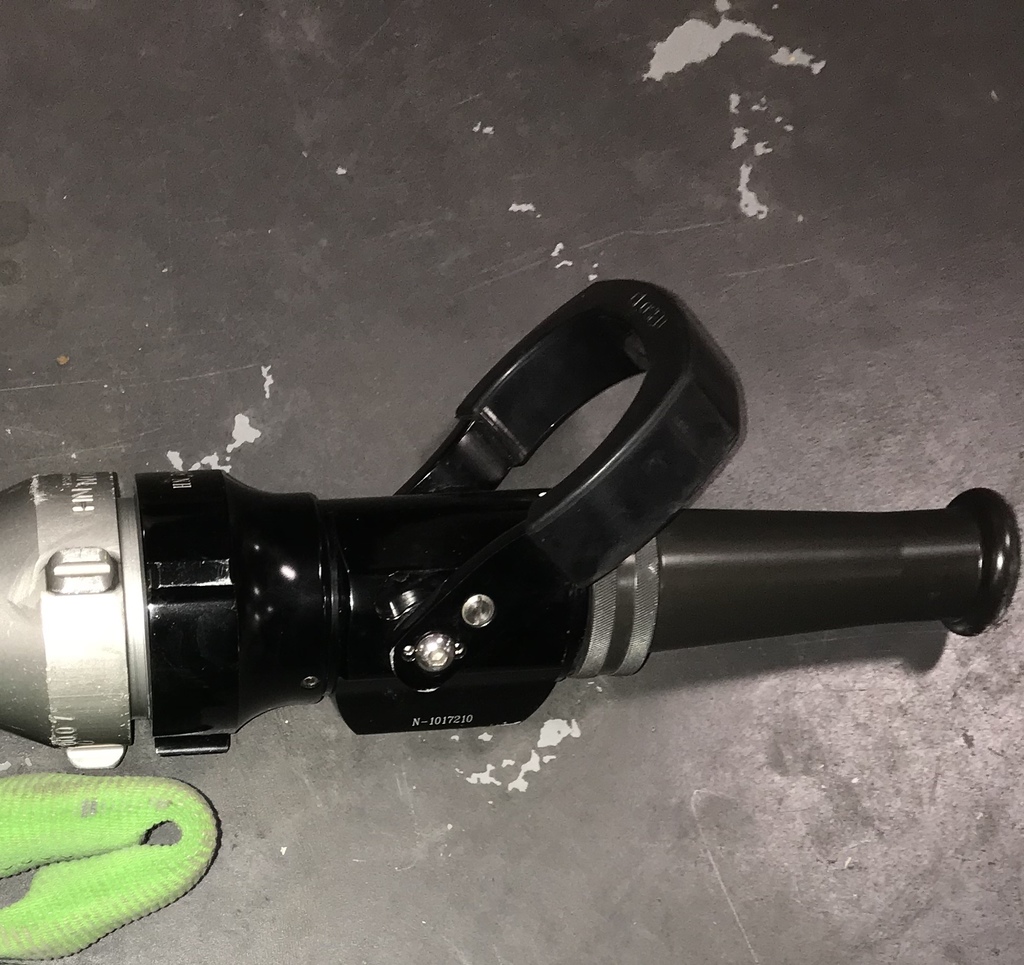 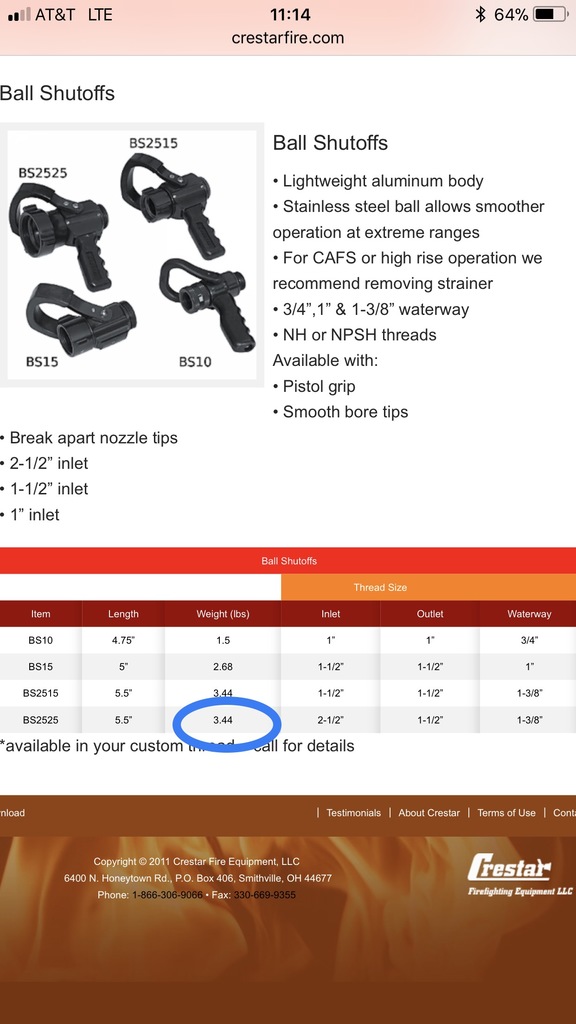 The weight of our 2.5" smoothbore on our high rise packs