How A Meme About Ventilation Went "FDNY Viral"

I made up a meme on Facebook recently on the need for ventilation to be "Controlled, Communicated, & Coordinated". I think we'd all agree that this is a good tactical practice to observe. The meme generated a lot of discussion about the practice of ventilation in general and several FDNY "Heavyweights" like Chiefs Vin Dunn & John Salka, Capt. John Ceriello, and Lt. Bob Pressler weighed in. Now these are all guys who have forgotten more than I know, so I just sat back (with a lot of other Facebook users) and watched & learned from the discussion. At the end of the postings Chief Dunn "ordered me" - in a nice way - to put a summary of the discussion together which I did with the help of Nick Papa from New Britain (CT) Fire. What you see below is that summary submitted with respect. I hope it proves useful. 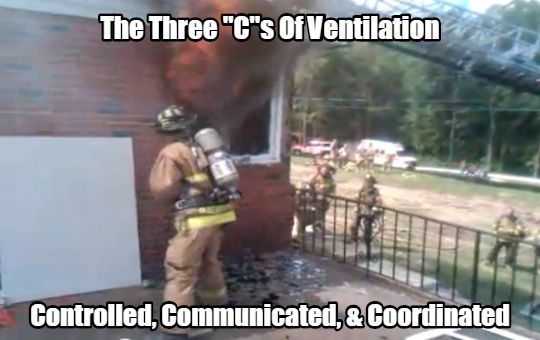 Vincent Dunn: Kevin great stuff. I am sure you know that it comes from UL 2010 full scale testing on venting fires in buildings. Venting should be controlled, communicated between hose team and outside vent firefighter and coordinated with the hose team advance. I know because I have been talking to FDNY captain John Ceriello who was an advisor to the UL test and now this is his mission. Regards, Vin

Bob Pressler: Chief Dunn isn't that what's it's always been? Venting for fire vs venting for life? Venting for fire was always intended to be coordinated with the Engines advance while venting for life was done with the knowledge that the fire might draw to your location but the attempt at saving a life was worth the risk. The thing that confuses me is how the test fires in townhouse buildings on Governors Island was enough to change the time proven tactics in Old Law Tenements as well as new laws and apartment houses. Opening the bulkhead was done to expedite the Engines advance and to alleviate banking down if products of combustion to the lower floors.

Vincent Dunn: Bob, I understand how important venting can be at a fire and I realize this is a hot button issue in the FDNY. But in the spirit of furthering discussion I just read the UL test and the FDNY bulletin on venting for the first time. The FDNY states there is no more "venting for life". (which critics said gave a reason for "freelance venting".) But more importantly several UL full scale fire tests found when not venting a burning room the resulting temperature and smoke at floor level where a possible victim would give them a better chance of survival. When venting occurred temperatures were higher and smoke more toxic. At my last fire on 77th street upon arrival L.25 firefighter on an aerial at 3rd floor level radios, " Ladder 25 to Engine 74 let me know when you get water and I will take windows. Flame visible through window from street. He delays venting (control). I hear later, Engine 74 to Ladder 25 take the windows we are moving in.(communications). Firefighter on ladder takes windows, moves down ladder then hose stream knocks down fire in room, water, smoke and steam shoots out windows (coordination). Regards, Vin

Bob Pressler: Thanks Chief. So that's the theory about not getting the bulkhead any longer? That is being considered "venting for life"? At a recent top floor fire in the Bronx the 1st due companies masked up on the floor below (4th floor) and later arriving companies needed to mask up in the lobby! I think examples like that are what is making this such a hard topic

John Ceriello: The FDNY policy is ALL venting needs to be coordinated- horizontal and vertical. Chief Dunn is correct in regards to increased temperatures and toxic smoke when premature venting occurs. As for vertical bulkhead ventilation- if the line is moving in or the truck has door control on the fire floor-VENT THE BULKHEAD! If they do not then coordination is required with the officer at the tip of the spear. FDNY also want its members to differentiate between Known vs. Suspected life hazard. If you see something/hear something/ or a credible witness ON THE FIRE-GROUND/ says there is someone in there- do your job to the best of your ability to save them. There is a lot more to this, if you need more answers contact me direct at johnceriello@yahoo.com
"Be Smart Out There"

Vincent Dunn: John, your statement regarding vertical venting is really important= "If the line is moving or the truck has door control on the fire floor-VENT THE BULKHEAD!" This clears up the confusion. And must be restated over and over. A lot of firefighters incorrectly believe we do not want them to do roof bulkhead venting any more. This is the big misunderstanding. Horizontal venting principles are understood but roof venting is not. Your statement above clears up that misunderstanding. Vin

John Ceriello: 10-4 Chief the fire in the Bronx that is mentioned in no way reflects the SOP's of the department- I'm sure there was a communication breakdown that led to smoke logged top floor.

John Salka: The problem here is there are so many variables it is almost impossible to test or study any number of fires and come up with a standard or procedure. The variables include how big is the fire area, what floor is it on, what is the fire load, what is the extent and volume of fire, is the fire area or room isolated or are there doors open to other areas, is this a wood building or concrete or some combination, are there older single pane windows or thermal pane, is the area sprinklered or not, what is the staffing of the first arriving units, are there hydrants available or not? These are just a small sample of the questions and there are often many answers to each of the questions. Here's my question; how many test fires in how many buildings does it take to justify changing tactics that have worked and worked well for decades?

Vincent Dunn: John, this discussion, the UL full scale tests and the FDNY vent bulletin, recommend Control, Communicating and Coordinating ventilation procedures at fires. This has always been a goal of venting tactics.

John Salka: Yes, I agree. This is old news! It was 20 years ago when we stopped the OV from venting until they contacted the inside team.

Vincent Dunn: Yes that is true.

John Ceriello: If you delve into the research that the FDNY performed in coordination with NIST & UL you will see much of the data confirms the tactics that have "worked well" for many years. However, one of the missing components was the change in the fuel package of our modern fireground. The gap that the department felt needed to be filled was the tightening up of ventilation- not major "changes". Door control (denying air to the fire) and bulkhead coordination (not no venting) were just 2 of a number of adjustments. The reasoning of "too many variables "would then lead me to say that any SOP's would be impossible to produce for any fire. Yet we do have SOP's for different building types, why because although no 2 fires are alike shameless plug for my presentation at Firehouse Expo 2017) there are numerous similarities. A fire does not know what building it is in or what city, state or country (or research building) it is just reacting to the laws of physics around it! The research is continuing and is shedding light on issues that will help us understand our job and better so we can perform at our best level- I love the discussion! Thank you, brothers.

John Ceriello: Chief Dunn is correct that the 3 "C's" had always been the goal of venting tactics- but like any tactics sometimes it needs to be revisited and reaffirmed in a different way. Decreasing fire duty makes this all the more necessary.

John Ceriello: In the aftermath of the Watts St. fire the FDNY tweaked tactics that required the OVM to ask permission to vent from the officer on the inside (this really was just verifying coordination). This shows we have always changed our tactics along the way. Now with new found understanding the job is applying that same coordination (permission) to vertical ventilation. It seems very common sense to me.